Comcast says the rollout to its platforms begins tomorrow and will complete by month’s end.

This lines up with the schedule that the company announced in January, which pointed to a broader launch on July 15. NBCUniversal says that’s still happening, though the launch will no longer coincide with the Tokyo Summer Olympics.

Comcast subscribers will get access to Peacock’s premium tier, which it says will include an on-demand library of more than 15,000 hours of TV and movies, including “30 Rock,” “Parks and Recreation,” “Two and a Half Men,” “Yellowstone,” “Law & Order” and its various spin-offs, “Jurassic Park” and “Shrek.” It also will include early access to NBC’s late-night shows “The Tonight Show” with Jimmy Fallon and “Late Night With Seth Meyers.”

When the service launches more broadly in July (which is also when it launches on mobile), there will be a free tier with roughly half as much content. If you pay for Peacock Premium separately, it will cost $4.99 per month with ads, or $9.99 per month without ads. (Peacock’s ad load will be relatively light at launch, with no more than five minutes of ads per hour.)

Like every streaming service, Peacock will eventually feature original programming, including a reboot of “Battlestar Galactica.” The release dates for some of that original programming may be delayed, however, as the COVID-19 pandemic has shut down productions worldwide. But Peacock Chairman Matt Strauss told reporters today that a few of its series are on track for 2020, including the “Psych” movie, “Brave New World” and the reboots of “Punky Brewster” and “Saved by the Bell.”

Strauss added that he remains “very optimistic” about Peacock’s prospects, thanks to “a vast library of content that we know is going to resonate.” (Lest this seem like merely putting a brave face on a tough situation, it’s worth noting that Disney+ recently passed more than 50 million subscribers despite — “The Mandalorian” aside — a relatively limited slate of originals.) 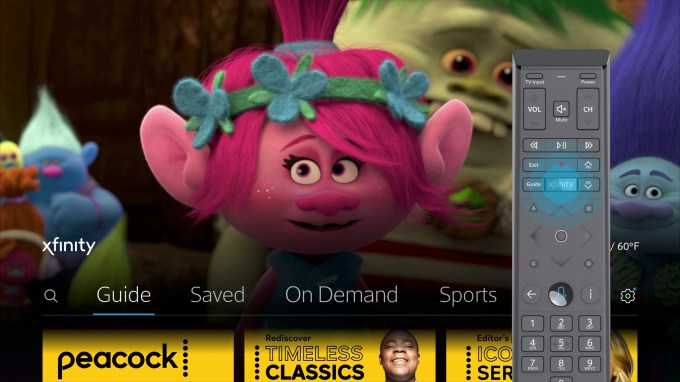 “What’s postponed in 2020 will come back to us, even bigger, in 2021 — when Peacock will, arguably, really be hitting its stride,” Strauss said.

Dana Strong, president of consumer services at Comcast Cable, also noted that “viewing on every dimension of our platform is up during this period,” with a year-over-year increase of two hours per day per household, as well as a 50% increase in video-on-demand viewing.

Strauss also downplayed COVID-19’s impact on advertising, noting that Peacock reached the milestone of 10 advertising sponsors at launch, and characterized its deals as being more focused on the “long-term.”

And while Comcast (as NBCUniversal’s parent company) makes sense as the initial cable partner for Peacock, he said, “We see an opportunity to do similar bundling deals with other distributors.”