As workers moved from office to home and students moved to being educated online, demand for new PCs surged in Q1, but Canalys found that shipments actually dropped 8% in spite of this, due to COVID-19 related supply chain problems.

The 8% drop was the worst since 2016 when shipments dropped 12%, according to the firm. Companies were looking to get new machines into the hands of employees who normally worked on desktop machines in the office, while parents were buying machines for children suddenly going to school online.

Rushabh Doshi, research director at Canalys says that products were flying off the shelves in Q1, but the PC makers couldn’t keep up with demand as supplies were limited due to a number of factors.

“…PC makers started 2020 with a constrained supply of Intel processors, caused by a botched transition to 10nm nodes. This was exacerbated when factories in China were unable to reopen after the Lunar New Year holidays.

“The slowdown in supply met with accelerated demand, as businesses were suddenly forced to equip a newly remote workforce, placing urgent orders for tens of thousands of PCs. Children, too, needed their own PCs, as schools closed and lessons went online,” Doshi explained in a statement.

Lenovo and HP owned the lion’s share of the PC market in Q1 with 23.9% and 21.8% share respectively. Dell was in third with 19.6%. Apple was well behind in fourth place with just 6% of worldwide market share.

Only Dell projected positive growth with a modest 1.1% annual rate. All others were projected to be negative with Apple projecting the sharpest drop at -21%. 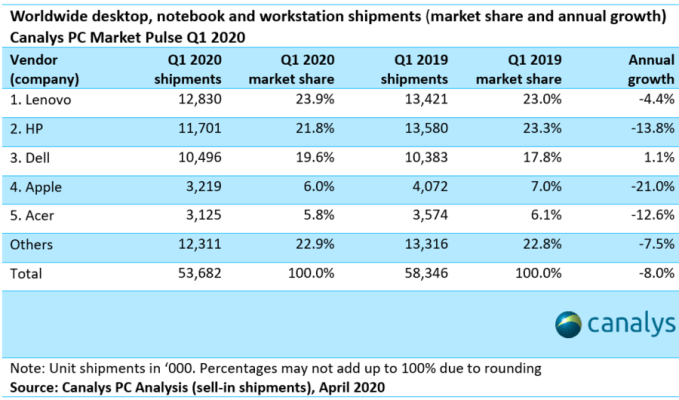 The good news is that from a revenue perspective, at least for the short term, these companies could command higher prices due to high demand and low supply, but overall the year looks bleak for PC makers, as Canalys predicts the rest of the year will see a further drop in sales as companies cut back on purchases, and consumers also likely limit purchases with so much economic uncertainty and demand satisfied for the short term.