Record demand for online grocery shopping amid the COVID-19 pandemic has sent the apps for grocery pickup and delivery services up the charts. Walmart Grocery, as a result, has now hit an all-time high in downloads — grabbing the No. 1 ranking position across all Shopping apps in the U.S. on April 5, 2020, and surpassing Amazon by 20%, according to a new analysis from app intelligence firm App Annie.

The Walmart Grocery application retained that No. 1 position for at least two days, the firm said, citing data from both the Google Play store and the Apple App Store, combined. While App Annie’s data was calculated on April 7, 2020, Walmart Grocery is still No. 1 on Google Play as of today, April 9. It’s also now No. 2 on the App Store. 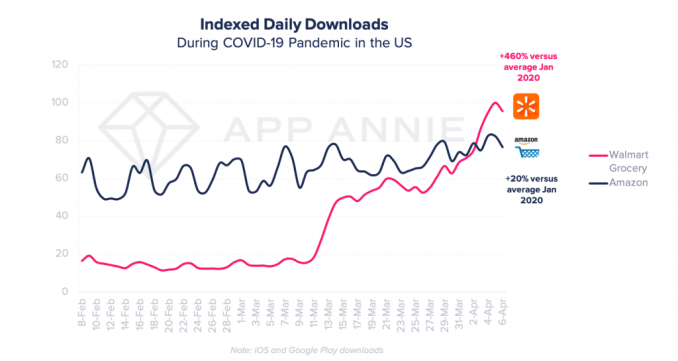 The surge of interest in Walmart Grocery may complicate Walmart’s plans to wind down the standalone app to instead merge Walmart Grocery into the retailer’s flagship mobile application and website. Earlier in March — before government lockdowns and home quarantines were widespread — Walmart announced a new strategy that would make its online grocery shopping service a part of the overall Walmart.com website and Walmart mobile app (the blue one).

The goal was to eventually wind down the separate Walmart Grocery experience entirely after customers had made the shift.

There are multiple benefits to this plan, including the ability to direct marketing dollars into only promoting one Walmart app, instead of two. It could also help drive sales across departments, as grocery shoppers may choose to buy other in-store items and Walmart shoppers may discover the grocery option while browsing the site for something else. In addition, Walmart Grocery’s millions of customers would be shifted to the main app, boosting its ranking on the app stores.

However, the COVID-19 health crisis has changed things quite a bit. As of April 5, 2020, the Walmart Grocery app saw a 460% growth in average daily downloads, in comparison with its January 2020 performance. That indicates a surge of brand-new customers to Walmart Grocery who may have never placed an online grocery order.

Reached for comment, a Walmart spokesperson says the company still plans to merge the apps. “We’re paying close attention to customer feedback and adjusting as needed as we know pickup and delivery are more important now than ever,” they added.

Walmart Grocery isn’t the only Shopping app surging due to increased demand amid COVID-19.

An earlier report from Apptopia in March saw Walmart Grocery, Instacart and Shipt climbing the charts.

Overall, demand for retail delivery is now booming with Shopping app global downloads hitting 106 million during the week of March 29 and April 4, 2020, App Annie says — that’s up 15% from the weekly average in January 2020. Downloads in the U.S. alone were 14.4 million — up 20% from the same period. While Walmart Grocery’s jump was much larger (460%), Amazon also saw 20% growth in average daily downloads from January.

Even Walmart’s internal, employee-facing app is growing, App Annie found. The Me@Walmart app for associates using the Walmart scheduling system grew 220% on Android phones during the week of March 22 compared to four weeks prior. That reflects the increased demand for in-store workers during the COVID-19 pandemic.

Walmart had said in March it planned to hire 150,000 new employees in both its stores and fulfillment centers to help it meet the increased demand for e-commerce orders and deliveries. Since the March announcement, Walmart said it has hired around 5,000 new employees per day and may even surpass the original 150,000 figure. While Walmart’s intention was to hire these workers on a more temporary basis, it may find that things don’t revert to “normal” any time soon. Newcomers to online grocery may discover it’s an easier and now less riskier way to shop, and will continue to do so even when lockdowns are lifted.