France’s competition authority has ordered Google to negotiate with publishers to pay for reuse of snippets of their content — such as can be displayed in its News aggregation service or surfaced via Google Search.

The country was the first of the European Union Member States to transpose the neighbouring right for news into national law, following the passing of a pan-EU copyright reform last year.

Among various controversial measures the reform included a provision to extend copyright to cover content such as the ledes of news stories which aggregators such as Google News scrape and display. The copyright reform as a whole was voted through the EU parliament in March 2019, while France’s national law for extended press publishers rights came into force in October 2019.

A handful of individual EU Member States, including Germany and Spain, had previously passed similar laws covering the use of news snippets — without successfully managing to extract payments from Google, as lawmakers had hoped.

In Spain, for example, which made payments to publishers mandatory, Google instead chose to pull the plug on its Google News service entirely. But publishers who lobbied for a pan-EU reform hoped a wider push could turn the screw on the tech giant.

Nonetheless, Google has continued to talk tough over paying for this type of content.

In a September 2019 blog post the tech giant dug in, writing — without apparent irony — that: “We sell ads, not search results, and every ad on Google is clearly marked. That’s also why we don’t pay publishers when people click on their links in a search result.”

It has also since changed how Google News displays content in France, as Euractiv reported last year — switching to showing headlines and URLs only, editing out the text snippets it shows in most other markets. 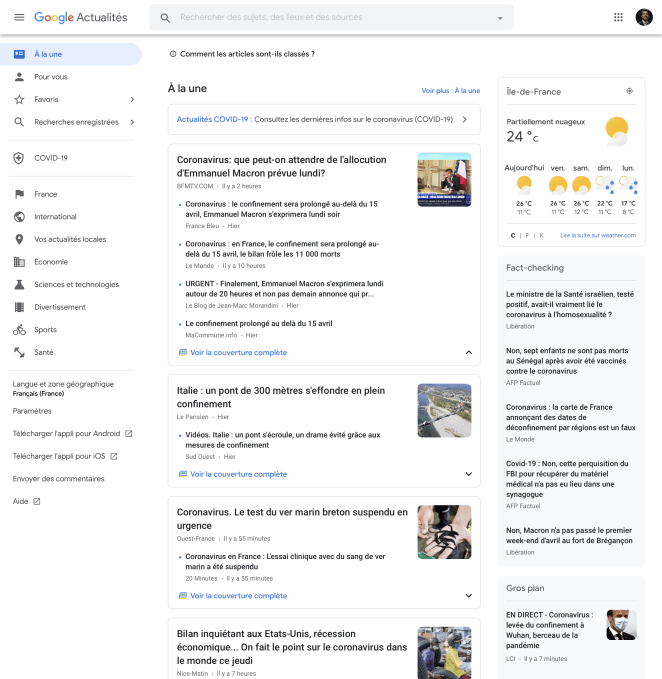 However France’s competition authority has slapped down the tactic — taking the view that Google’s unilateral withdrawal of snippets to deny payment is likely to constitute an abuse of a dominant market position, which it writes “seriously and immediately damaged the press sector.”

The company has a dominant position in Europe’s search market with more than 90% marketshare.

The authority cites Google’s unilateral withdrawal of “longer display article extracts, photographs, infographics and videos within its various services (Google Search, Google News and Discover), unless the publishers give it free authorization” as unfair behavior.

“In practice, the vast majority of press publishers have granted Google licenses for the use and display of their protected content, and this without possible negotiation and without receiving any remuneration from Google. In addition, as part of Google’s new display policy, the licenses which have been granted to it by publishers and press agencies offer it the possibility of taking up more content than before,” it writes in French (which we’ve translated via Google Translate).

“In these conditions, in addition to their referral to the merits, the seizors requested the order of provisional measures aimed at enjoining Google to enter in good faith into negotiations for the remuneration of the resumption of their content.”

Hence issuing an emergency order — which gives Google three months to negotiate “in good faith” with press agencies and publishers to pay for reusing bits of their content.

Abusive practices the agency says it suspects Google of at this stage of its investigation are:

The order requires Google to display news snippets during the negotiation period, in accordance with publishers wishes, while terms agreed via the negotiation process will apply retrospectively — from the date the law came into force (i.e. last October).

Google is also required to send in monthly reports on how it’s implementing the decision.

“This injunction requires that the negotiations actually result in a proposal for remuneration from Google,” it adds.

We reached out to Google for comment on the Autorité de la Concurrence’s action. In a statement attributed to Richard Gingras, its VP of News, the company told us:

Since the European Copyright law came into force in France last year, we have been engaging with publishers to increase our support and investment in news. We will comply with the FCA’s order while we review it and continue those negotiations.

A Google spokeswoman also pointed back to its blog post from last year, highlighting what she described as “the ways we already work with news publishers for context.”

In the blog post the company discusses directing traffic to news sites; providing ad tech used by many publishers; and a funding vehicle via which it says it’s investing $300M “to help news publishers around the world develop new products and business models that fit the different publishing marketplace the Internet has enabled”.

Interim measures are an antitrust tool that Europe’s competition authorities have pulled from the back of the cupboard and started dusting off lately.

Last October EU competition chief Margrethe Vestager used an interim order against chipmaker Broadcom to stop applying exclusivity clauses in agreements with six of its major customers — while an investigation into its practices continues.

The commission EVP, who also heads up the bloc’s digital strategy, has suggested she will seek to make greater use of interim orders as an enforcement tool to keep up with the fast pace of developments in the digital economy, responding to concern that regulators are not able to respond effectively to curtail market abuse in the modern Internet era.

In the case of France’s competition authority’s probe of Google’s treatment of publishers content the authority writes that the interim protective measures it’s ordered will remain in force until it adopts its decision “on the merits”.