Motherly CEO Jill Koziol admits that it was a tough pitch when she and her co-founder Liz Tenety first tried to get investors on-board in 2015.

“We wanted to create a brand first and foremost,” Koziol told me. “We did not want to go and build a media company or a [direct-to-consumer] company or Facebook for moms — because, spoiler alert, it’s called Facebook.”

Instead, she described Motherly as a company that sits at the “intersection” of all three approaches. It started out by publishing motherhood-themed content on its website and on social media (and more recently in podcast form), which in turn encouraged the audience of 30 million unique users to start “engaging with us and with each other.”

Now that there’s a big audience and a real community, the company is getting ready to launch the Motherly Store. And it’s announcing that it has raised $5.4 million in Series A funding.

Koziol described her approach as building a trusted brand “that’s woman-centered — not baby-centered — and expert-driven,” then using that brand to sell products. She said Motherly has reversed the strategy of direct-to-consumer startups that sell products, then add content and community to support those commerce goals.

“Everyone says we did all the hard stuff first,” Koziol said. “We’re showing the world that motherhood is not niche, that you can build a brand through content and then create the natural extensions out of that.” 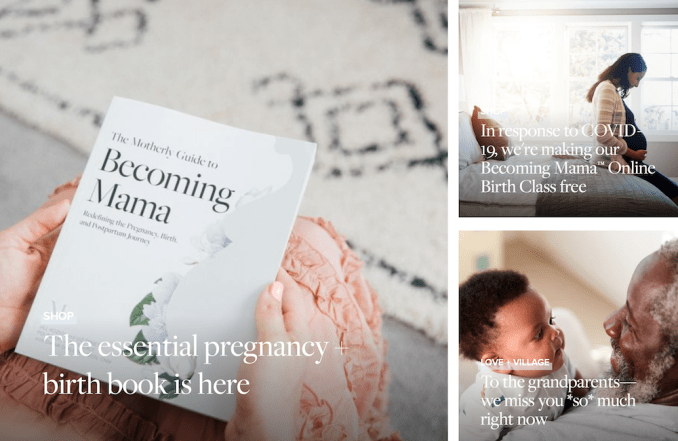 The Series A funding was led by 8VC, with participation from Founders Fund, Muse Capital, AET and AmplifyHer Ventures.

“We’re long on millennial moms, and Motherly has demonstrated a unique ability to be at the center of this hyper-engaged market already,” AmplifyHer’s Meghan Cross told me via email. “Its content has organically sparked a vibrant conversation, and commerce is the logical extension.”

Koziol, meanwhile, said that Motherly was able to build this audience with “virtually” no marketing spend. That sounds particularly difficult given all the other parenting and motherhood-themed content already online, but Koziol said that she and Tenety (a former Washington Post editor) are both millennial mothers themselves, and they realized that “in media brands across the board, motherhood was treated as cartoonish … everything was very baby-centered.”

She argued Motherly has succeeded so far because it’s aimed at a more educated and more diverse group of women, who are more likely to continue working after they have children.

And as Motherly moves into commerce, she said that will include both company-branded products (Sounds True is publishing the startup’s second book, “The Motherly Guide to Becoming Mama: Redefining the Pregnancy, Birth, and Postpartum Journey”), as well as a Motherly Store, which will offer a curated selection of products for moms, largely from smaller, direct-to-consumer brands.

Koziol suggested that these brands will benefit from access to Motherly’s audience (particularly as advertising costs have grown to unsustainable heights for many D2C brands), while moms will benefit from having a “credible” source that can help “narrow down those choices.”

Of course, the landscape for media, commerce and parenting have all changed dramatically in the past few weeks thanks to the COVID-19 pandemic. But Koziol noted that as a “100% work from home company,” Motherly was better-prepared for this shift.

More broadly, she suggested that moms are going to need more help and support than ever — which Motherly is trying to provide, for example by offering its online birth class for free.

“This woman in our audience has been layering roles on for years,” Koziol said. “And what we are now seeing, in addition to carrying the mental load of parenthood disproportionately and being a full-time bread winner, you’re layering full-time child-care and homeschooling. These are three different jobs.”