Apple has made a donation to a new fundraising campaign, America’s Food Fund, along with Laurene Powell Jobs, Leonardo DiCaprio and the Ford Foundation. Together, they’ve contributed $12 million toward the $15 million goal for the new initiative being hosted on fundraising platform GoFundMe. The proceeds will go to benefit World Central Kitchen and Feeding America.

The former was founded in 2020 by Chef José Andrés to provide meals to the hungry in the wake of man-made and natural disasters worldwide. Since its debut, World Central Kitchen has served more than 15 million meals across 19 disasters, including Hurricane Dorian in the Bahamas and Hurricane Maria. It also served 3.7 million meals in 2017-2018 in Puerto Rico. 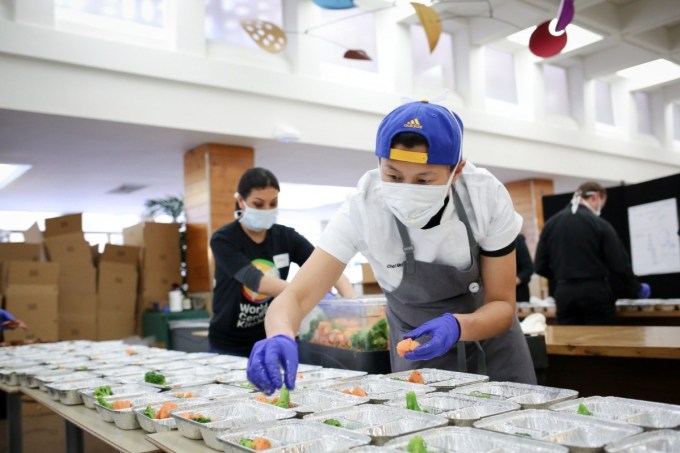 Feeding America, meanwhile, is the U.S.’s largest hunger-relief organization, serving more than 40 million Americans through a network of 200 food banks and 60,000 food pantries and meal programs with a presence across the U.S. Its COVID-19 relief efforts involve its Response Fund, launched to help member food banks secure the resources they need to continue operations.

The choice to essentially run a GoFundMe campaign for America’s Food Fund is unusual. Frankly, the optics aren’t great here.

Most of the philanthropic efforts from corporations or high-net-worth individuals so far during the COVID-19 outbreak have involved direct donations to nonprofits, food banks and other relief efforts. If $15 million is what’s needed now, then the donors involved here should just have given the $15 million. But instead, they’ve donated $12 million and presented this campaign in the hopes that “us regular folks” will pitch in the rest.

“If you are in a position to contribute and you have the means to take action, we hope you will donate today. No dollar amount is too small,” the GoFundMe campaign reads.

That’s asking people who are far more impacted by the coronavirus crisis than Jobs or DiCaprio to step up at a time when job security is questionable, food prices are going up and the threat of losing work due to infection is also a serious concern. It is wonderful that people are willing to do this, but there’s something just odd about billionaires and millionaires acting like we’re all in this together. They have their yachts, after all. Everyone else is just trying to survive.

The campaign is also losing a percentage of donations to fees. (GoFundMe will charge 2.9% and a $0.30 per donation transaction fee.) An in-cash donation directly to the organizations in need would be preferable. Even a campaign where you can donate online directly to the selected organization would be an improvement.

On World Central Kitchen’s site, for example, there’s a checkbox where you can opt to cover the fees with your donation. On Feeding America’s site, you have the option to commit to a monthly donation and also are told explicitly how much your cash donation will provide, in terms of meals.

To date, several high-net-worth individuals have donated to various relief efforts during the COVID-19 outbreak on their own. Winfrey, for instance, gave $10 million to coronavirus relief efforts, with $1 million of that toward this new America’s Food Fund campaign. Jeff Bezos today announced a direct donation of $100 million to Feeding America. Michael Bloomberg is committing $40 million to fight the spread of the virus in low and middle-income countries. Dolly Parton donated $1 million to coronavirus research. Actors Ryan Reynolds and Blake Lively said they were donating $1 million to food banks.

If you want to donate to a local food bank feeding the hungry — or volunteer — in your own neighborhood, you can do so from Feeding America’s website here. From its search results, you’ll get the web addresses for the food banks in your city. And from their own websites, you can find out how to give directly.