The spread of COVID-19 has already had a significant impact on the mobile app industry, and that will continue in the years to come. According to a revised 2020-2024 market forecast from app intelligence firm Sensor Tower, a sizable increase in app downloads for industries like remote work and education will lead to a large surge in app installs for the early part of 2020 and beyond, despite other decreases in downloads for ridesharing and fast food apps. However, the expected economic downturn resulting from COVID-19 will somewhat dampen revenue growth in the years ahead, the report found. Despite this, mobile app spending worldwide will continue to grow and will even double by 2024.

Though COVID-19 is having an impact on the app stores’ revenue, growth remains strong.

Worldwide consumer spending in mobile apps is projected to reach $171 billion by 2024, which is more than double the $85 billion from 2019. This total, however, is about $3 billion (or 2%) less than the forecast the firm had released prior to the COVID-19 outbreak.

Still, it’s notable that even the slowest-growing regions on both app stores, Apple’s App Store and Google Play, will see revenue that’s over 80% higher than their 2019 levels by the year 2024.

The app stores will also hit several milestones during the next five years.

For starters, global spending in mobile apps will surpass $100 billion for the first time in 2020, growing at approximately 20% year-over-year to hit $102 billion.

Remarkably, the forecast also predicts that revenue from non-game mobile apps is expected to surpass that of mobile games for the first time by 2024, driven by the growth in subscriptions — particularly Entertainment, Social Networking, Music and Lifestyle app subscriptions.

By this time, mobile games will reach $97.8 billion, or around 41% of total consumer spending. The App Store will account for a sizable chunk of that spending, with ~$57 billion in mobile game revenue in 2024 versus Google Play’s ~$41 billion. 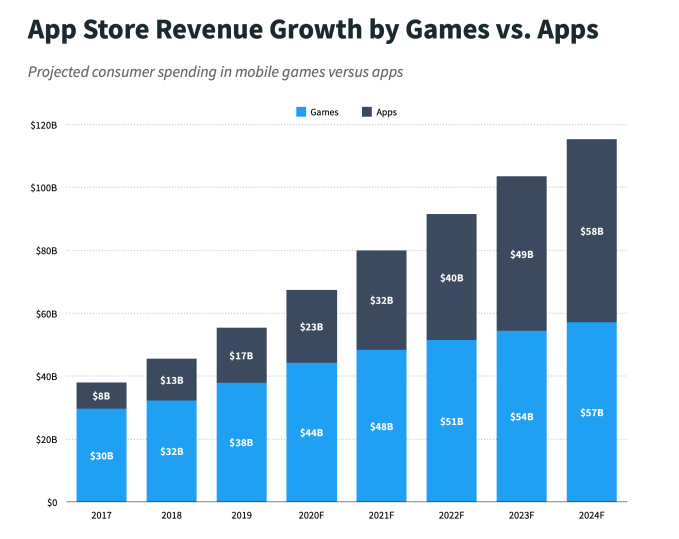 The App Store, not as surprisingly, will also maintain its sizable lead in consumer spending through 2024, accounting for 67% of total revenue across both it and Google Play. It will grow at a compound annual growth rate of 15.8% compared with Google Play’s 13.2%.

The top five countries by revenue will remain unchanged through 2024: China, U.S., Japan, Great Britain and Taiwan. China will continue to be a top market, despite regulations on app and game publishing, and will reach $35 billion in App Store spending alone by 2024. 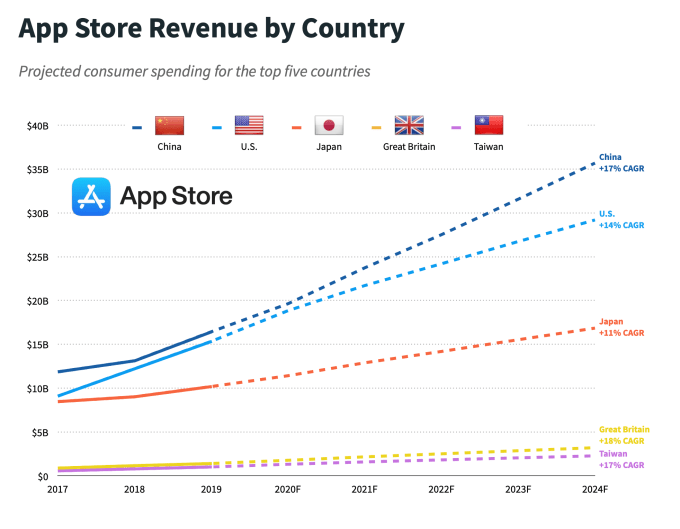 In terms of app downloads, the forecast predicts a lasting lift from the impacts of COVID-19.

By 2024, downloads will reach 183.7 billion, up 9% from the earlier forecast that came out before COVID-19 that had initially accounted for 7 billion fewer installs.

Much of this download growth is happening this year, when first-time app downloads are poised to reach 140.3 billion, up 22% from 2019.

In addition to increases in non-game apps — like education, grocery delivery or remote work apps — mobile game downloads will grow 30% year-over-year in 2020 to reach 56.2 billion, compared with 10.4% growth between 2018 and 2019.

The early indication is that China will see a massive increase in downloads in 2020, particularly in the Games and Education categories. This follows a drop in downloads over the past few years, due to government regulatory practices, like the games licensing freeze.

During the forecast time frame, download growth will slow in India and Brazil, as the markets become more saturated, while growing in Latin America (up 58%) and Asian markets outside of China (up 82%).

Another notable milestone may take place in 2022, when the U.S. pulls ahead of China in terms of App Store downloads to reach number one. The U.S. has been narrowing the gap between the two in recent years, from 3.5 billion in 2017 to 1.1 billion in 2019. It will continue to close the gap during parts of 2020 and 2021, as well. 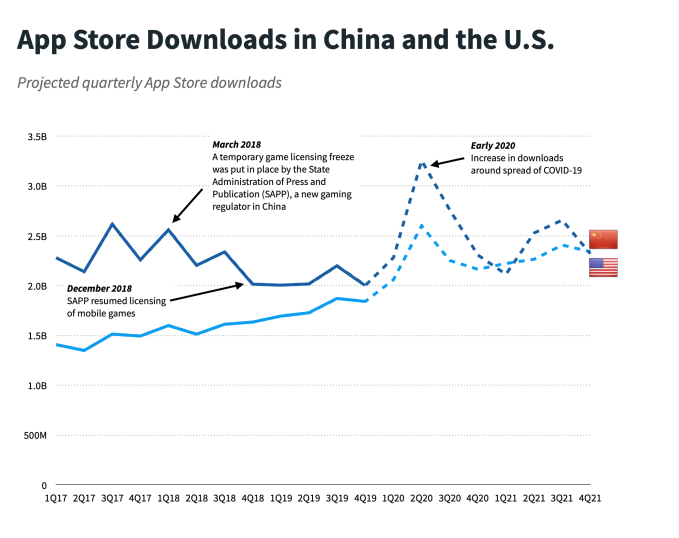 Other top countries for downloads in 2024, besides the U.S. and China, include Japan, Great Britain and Russia. 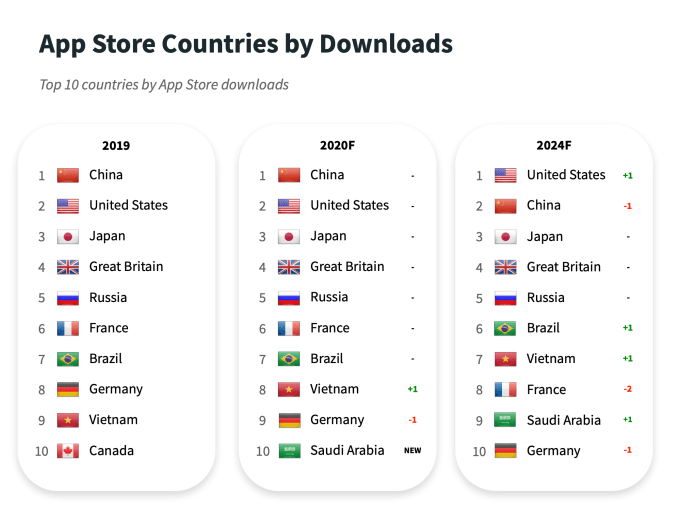