If you can’t stop them, power them. That’s the strategy behind Snapchat App Stories, which launches today to let users show off their ephemeral content in other apps too. The first partners will let you post Stories to your dating profile in Hily, share them alongside [music] videos in Triller, watch them while screensharing in Squad, or give people a peek at your life in augmented reality network Octi. Developers can now sign up to add Stories to their apps.

Snapchat’s Stories format has been widely cloned, most famously by Instagram and Facebook, but with versions in various states of development for YouTube, Twitter, LinkedIn, SoundCloud, and more. Snapchat hopes to retain some grip on Stories and dissuade more copycats by letting developers bake the original version into their apps rather than building a bootleg attempt from scratch.

If you need Snapchat to share Stories to popular apps, that could boost content production plus subsequent viewership and ad impressions inside of Snapchat, remind people to shoot Stories, and make sure having a Snapchat account stays relevant. “We definitely think there’s a potential for monetization in App Stories but not yet” Snap’s VP of partnerships Ben Schwerin tells me. For now, Snapchat isn’t injecting ads into alongside Stories into other apps, though that’s clearly the plan.

“There are certain platforms out there that have decided they want to invest in building their own Stories product and their own camera, but it’s not a trivial thing to do. It takes resources and time. We think we can help developers do that” Schwerin explains. “Getting more people out there, regardless of age or where they live, comfortable using Stories probably makes them more likely to be able to pick up and enjoy Snapchat.” 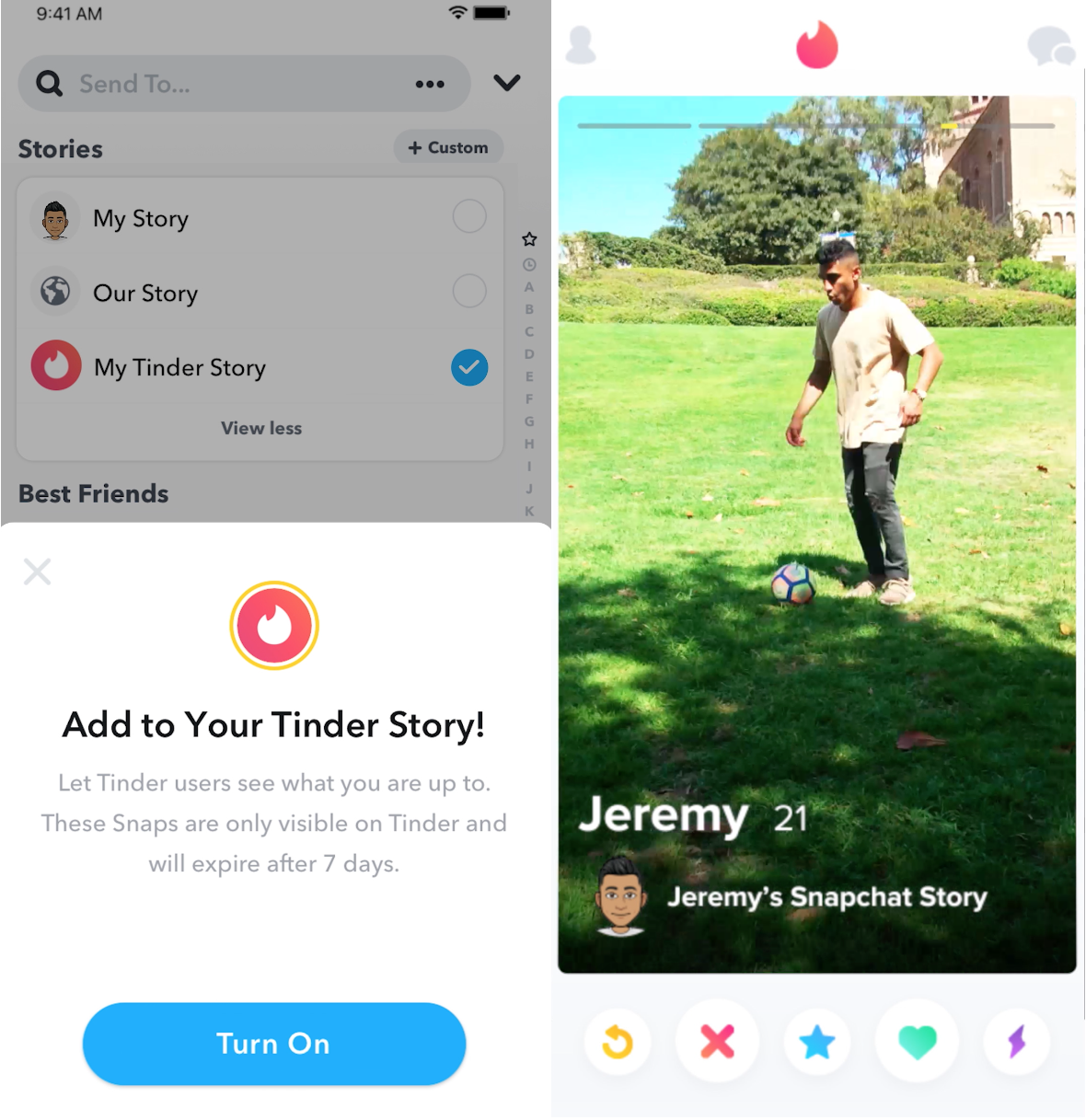 Snapchat initially announced the plan for App Stories at its Partner Summit exactly a year ago. Unfortunately, its second annual developer conference that was set for this week was cancelled due to coronavirus.

Though advertising spend may be reduced, at least the app has experienced an increase in usage while everyone shelters in place. That includes third-party apps built on its Snap Kit platform that lets developers piggyback on Snapchat’s login, Bitmoji, and camera effects.

“We continue to see incredible growth from established apps like Reddit and Spotify and TikTok, and from startups that are really building from the ground up on Snap Kit like Yolo” Schwerin reveals. “People are spending more time at home and less time with friends. We’re seeing increased usage of Snapchat.”

Snap Kit has allowed Snapchat to rally would-be copycats into a legion of allies as it fights to stave off the Facebook empire. That strategy combined with a high-performance rebuild of its Android app for the developing world led Snapchat’s share price to grow from $11.36 a year ago to a recent high of $18.98 before coronavirus dragged it almost all the way back down.

Now, when people shoot a photo or video in the Snapchat camera, they’ll get options to share it not just to their Story or Snap Map and the crowdsourced community Stories, but also to their Story within other apps integrated with Snap Kit. Users will see options to syndicate their Story to products equipped with App Stories where they’re already logged in.

Unlike on Snapchat where Stories disappear after 24 hours, they default to a 7-day expiration in other App Stories. That relieves users of having to constantly post ephemeral Snaps to keep their dating or social app profiles stocked with biographical content.

In Hily, Snapchat Stories partially replaces the homegrown version it’d spun up in the meantime to show potential dates off-the-cuff looks at people’s lives. In Triller, users can tap on a content creator’s profile pic to see biographical Stories instead of just their polished music videos. In Squad, users can co-watch Stories along with other things to screenshare. And in Octi, users can see someone’s Snapchat Story amongst other hidden content revealed by its augmented reality camera.

One app missing is Tinder, which Snapchat originally previewed as its launch partner at the App Stories reveal last year. Tinder is using Snapchat’s Bitmoji stickers, but may have gotten cold feet about Stories. The fact that Snap is only now launching App Stories, and still hasn’t officially launched Ad Kit that lets it inject its ads into other apps and split revenue with developers, shows it’s taking time to adjust to its platform strategy after years of shunning outside integrations. It still won’t reveal the revenue percentage split it’s applying to Ad Kit.

For Snapchat to gain momentum it needs two things: a constant influx of new users, eager to use its augmented reality camera and Bitmoji wherever they’re available, and more impressions to monetize with ads after Instagram stole the Stories use case for untold millions of older users. App Stories could help with both.

“The proliferation of stories as the primary way to share video content on mobile we think is a good thing” Schwerin concludes. But Snap has sat by idly as it’s served as the R&D lab for Facebook’s product. Now Snapchat needs to own the viewership and the ad dollars that Stories generate everywhere other than Facebook. Just coining the concept doesn’t bring in cash.