Work-from-home policies, social distancing and government lockdowns have increased the demand for video conferencing apps, for both business and personal use. According to a new report from App Annie, out on Monday, business conferencing apps have been experiencing record growth as a result, and just hit their biggest week ever in March, when they topped 62 million downloads during the week of March 14-21. Meanwhile, social networking video app Houseparty has also seen phenomenal growth in Europe during lockdowns and home quarantines.

While such growth was to be expected, App Annie’s report provides real-world context about just how many new customers these apps are gaining during this time.

For example, the jump in business app downloads to 62 million across iOS and Google Play earlier in March was up 45% from just the prior week. It was also the highest growth among any category across the app stores that week, the report said. And it was up 90% from the weekly average of business app downloads in 2019. 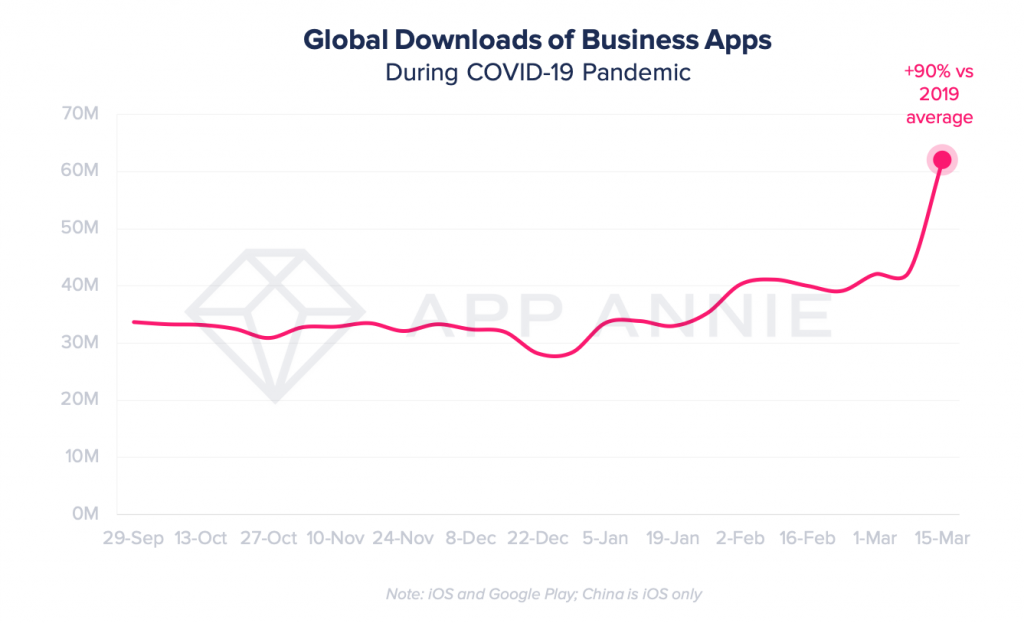 Much of the growth in the category is due to the increased adoption of apps like Google’s Hangouts Meet, Microsoft Teams and Zoom Cloud Meetings.

Zoom topped the charts worldwide in February and March, and continues to see high numbers of downloads in the U.S., U.K. and elsewhere in Europe.

A related report from the app store intelligence firm Sensor Tower saw Zoom’s U.S. downloads somewhat higher in mid-March, but noted that the term “Zoom” wasn’t a top 100 search term in the U.S. App Store before the week of March 9. That meant many new users were being sent the app’s installation page directly — such as via a link shared in a work email, calendar invite or an intranet site, perhaps.

At the same time in March, Google’s Hangouts Meet was seeing strong downloads in the U.K., U.S., Spain and Italy, in particular, with 24x, 30x, 64x and 140x the average weekly downloads in Q4, respectively.

Microsoft Teams saw significant — though not quite as strong — growth in Spain, France and Italy, at 15x, 16x and 30x the weekly levels of downloads in Q4, respectively. 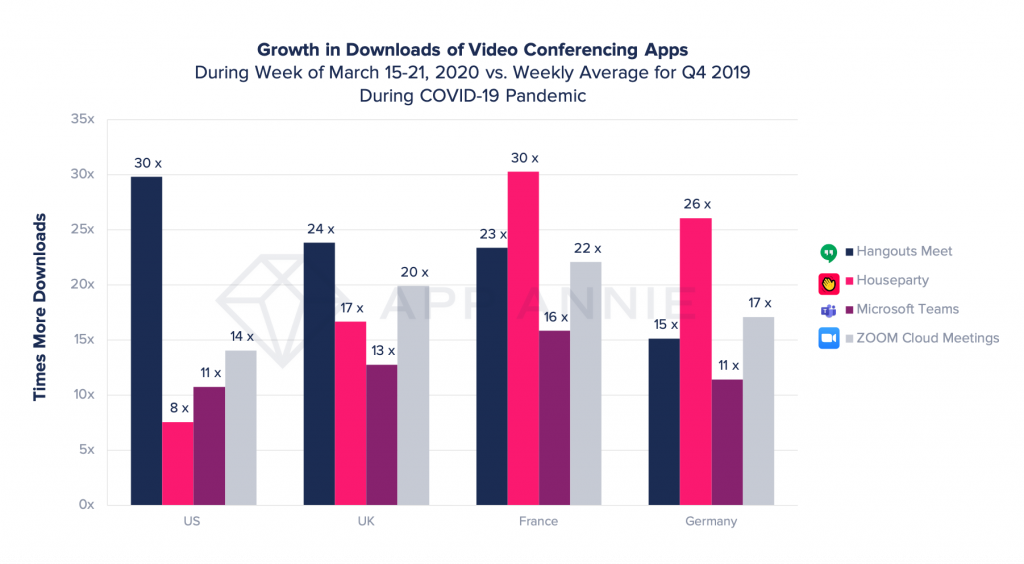 In terms of consumer apps, social video conferencing app Houseparty, popular among Gen Z, has been rapidly growing in Europe and elsewhere. The app benefits from network effects — meaning as more friends and family join Houseparty, the app becomes more useful. It then gets launched and used more often, too. In Italy, the week ending on March 21 saw Houseparty downloads surge at 423 times the average weekly number of downloads in Q4 2019.

In Spain, Houseparty skyrocketed with 2,360 times the number of downloads in the week ending March 21, compared with Q4. Also notable is that Spain was a market where, before, Houseparty didn’t have any wide-scale penetration. Because of the COVID-19 outbreak, it now has a base in a region where it otherwise may have never reached.

Unlike the business conferencing apps, Houseparty aims to make video chat a more personal and social experience. When you launch the app, it shows you’re free to talk and who else is online — similar to other messaging apps. But there are also live parties to join and in-app games to play, which signals the app is not meant for your virtual office meetings. 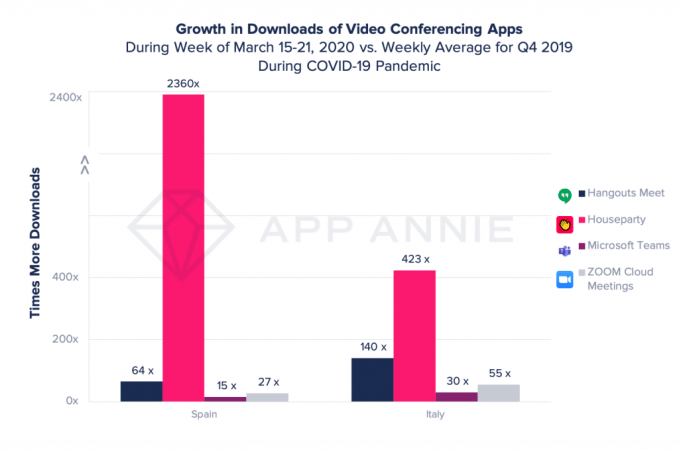 Business apps aren’t the only ones booming at this time, of course.

Educational apps, including Google Classroom and ABCmouse, have also spiked in March as have grocery delivery apps, like Instacart.

“As people face uncertain timelines for the length of social isolation, video conferencing apps have the potential to vastly influence our daily habits — breaking down geological barriers and fostering the ability to work and socialize relatively seamlessly,” noted App Annie, in its report. “It is an unprecedented time for the world and an incredibly dynamic time for mobile — we are seeing shifts in consumer behavior surface daily across virtually every sector,” the firm concluded.