Hello folks, welcome back (or hi for the first time) to The Station, a weekly newsletter dedicated to the all the ways people and packages move around this world. I’m your host, Kirsten Korosec, senior transportation reporter at TechCrunch.

I also have started to publish a shorter version of the newsletter on TechCrunch. That’s what you’re reading now. For the whole enchilada — which comes out every Saturday — you can subscribe to the newsletter by heading over here, and clicking “The Station.” It’s free!

Before I get into the thick of things, how is everyone doing? This isn’t a rhetorical question; I’m being earnest. I want to hear from you (note my email below). Maybe you’re a startup founder, a safety driver at an autonomous vehicle developer, a venture capitalist, engineer or gig economy worker. I’m interested in how you are doing, what you’re doing to cope and how you’re getting around in your respective cities.

Please reach out and email me at kirsten.korosec@techcrunch.com to share thoughts, opinions or tips or send a direct message to @kirstenkorosec.

It was a rough week for micromobility amid the COVID-19 pandemic. Bird laid off about 30% of its employees due to the uncertainty caused by the coronavirus.

The unprecedented COVID-19 crisis has forced our leadership team and the board of directors to make many extremely difficult and painful decisions relating to some of your teammates. As you know, we’ve had to pause many markets around the world and drastically cut spending. Due to the financial and operational impact of the ongoing COVID-19 crisis, we are saying goodbye to about 30% of our team.

The fallout from COVID-19 isn’t limited to Bird. Lime is also reportedly considering laying off up to 70 people in the San Francisco Bay Area.

Meanwhile, Wheels deployed e-bikes with self-cleaning handlebars and brake levers to help reduce the risk of spreading the virus. NanoSeptic’s technology, which is powered by light, uses mineral nano-crystals to create an oxidation reaction that is stronger than bleach, according to the company’s website. NanoSeptic then implements that technology into skins and mats to turn anything from a mousepad to door handles to handlebars into self-cleaning surfaces.

The upshot to all of this: COVID-19 is turning shared mobility on its head. That means lay offs will continue. It also means companies like Wheels will try to innovate or pivot in hopes of staying alive.

While some companies pulled scooters off city streets, others changed how they marketed services. Some turned efforts to gig economy workers delivering food. Others, like shared electric moped service Revel, are focusing on healthcare workers.

Revel is now letting healthcare workers in New York rent its mopeds for free. To qualify, they just need to upload their employee ID. For now, the free rides for healthcare workers is limited to Brooklyn, Queens and a new service area from upper Manhattan down to 65th street. Revel expanded the area to include hospitals in one of the epicenters of the disease.

Revel is still renting its mopeds to the rest of us out there, although they encourage people to only use them for essential trips. As you might guess, ridership is down significantly. The company says it has stepped up efforts of disinfecting and cleaning the mopeds and helmets. Revel also operates in Austin, New York City, Oakland, and Washington. It has suspended service in Miami per local regulations.

— Megan Rose Dickey (with a cameo from Kirsten Korosec)

Typically, I would highlight a large funding round for a startup in the “deal of the week” section. This week, I have broadened my definition.

On Friday, the House of Representatives passed a historic stimulus package known as the Coronavirus Aid, Relief, and Economic Security or “CARES” act. President Donald Trump signed it hours later. The CARES act contains an unprecedented $2.2 trillion in total financial relief for businesses, public institutions and individuals hit hard by the COVID-19 pandemic.

TechCrunch has just started what will be a multi-day dive into the 880-page document. And in the coming weeks, I will highlight anything related or relevant to the transportation industry or startups here.

U.S. airlines are receiving $58 billion. It breaks down to about $25 billion in loans for commercial carriers, $25 billion in payroll grants to cover the 750,000 employees who work in the industry.  Cargo carriers will receive $4 billion in loans and $4 billion in grants. These loans come with some strings attached. Airlines will have to agree not to lay off workers through the end of September. The package forbids stock buybacks and issuing dividends to shareholders for a year after paying off one of the loans.

Public transit has been allocated $24.9 billion. The CARES Act provides almost three times the FY 2020 appropriations for this category, according to the American Public Transportation Association. The funds are distributed through a formula that puts $13.79 billion to urban, $2 billion to rural, $7.51 billion towards state of good repair and $1.71 billion for high-density state transit. APTA notes that these funds are for operating expenses to prevent, prepare for, and respond to COVID-19 beginning on January 20, 2020.

Amtrak received an additional $1 billion in grants, that directs $492 million of those funds towards the northeast corridor. The remaining goes to the national network.

Small business loans are a critical piece of the bill, and an area where many startups may be focused. There is a lot to unpack here, but in basic terms the act provides $350 billion in loans that will be administered by the Small Business Administration to businesses with 500 or fewer employees. These loans are meant to cover an eligible borrower’s payroll, rent, utilities expenses and mortgage interest for up to eight weeks. If the borrower maintains its workforce, some of the loan may be forgiven.

Venture-backed startups seeking relief may run into problems qualifying. It all comes down to how employees are counted. Normally, SBA looks at a company’s affiliates to determine if they qualify. So, a startup owned by a private equity firm is considered affiliated with the other companies in that firm’s portfolio, which could push employment numbers far beyond 500. That rule also seems to apply to venture-backed startups, in which more than 50% of voting stock is held by the VC.

The guidance on this is still spotty. But Fenwick & West, a Silicon Valley law firm, said in recent explainer that the rule has the “potential to be problematic for startups because the SBA affiliation rules are highly complex and could cause lenders to group together several otherwise unaffiliated portfolio companies of a single venture capital firm in determining whether a borrower has no more than 500 employees.”

One final note: The SBA has waived these affiliation rules for borrowers in the food services and food supply chain industry. It’s unclear what that might mean for those food automation startups or companies building autonomous vehicles for food delivery.

COVID-19 has taken over, but deals are still happening. Here’s a rundown of some of partnerships, acquisitions and fundraising round that got our attention.

Remember, the weekly newsletter features even more mobility news and insights. I’ll leave ya’ll with this one chart from Inrix. The company has launched a U.S. traffic synopsis that it plans to publish every Monday. The chart shows traffic from the week of March 14 to March 20. The upshot: COVID-19 reduced traffic by 30% nationwide. 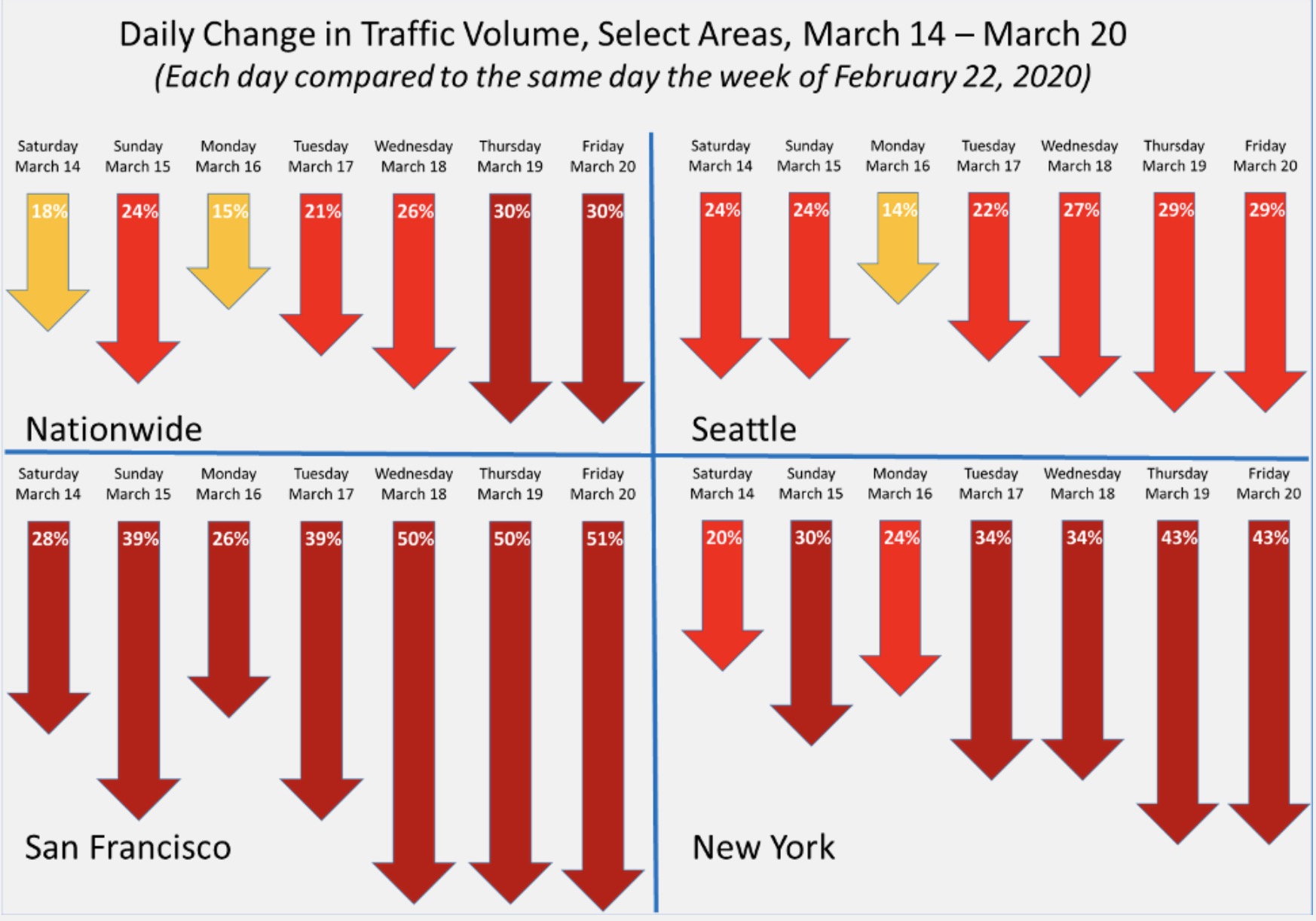