The impacts of telecommuting, shelter-in-place laws and home quarantines resulting from the COVID-19 outbreak are starting to impact broadband speeds across a number of U.S. cities, a new report has found. According to broadband analysis site BroadbandNow, 88 out of the top 200 most populous U.S. cities analyzed have now experienced some form of network degradation over the past week, compared with the 10 weeks prior, as more people are going online to work from home, video chat and stream movies and TV to keep themselves entertained. In a small handful of cities over the past week, there have even been significant degradations with download speeds dropping more than 40%, compared with the 10 weeks prior.

It’s not necessarily the areas hit hardest by the spread of the novel coronavirus that are experiencing the worst problems.

Cities including LA, Chicago, Brooklyn and San Francisco have seen little or no disruption in download speeds, the report claims. Seattle is also holding up well.

But New York City, now considered the epicenter of the virus in the U.S., saw download speeds drop by 24% last week, compared to the previous 10-week range. That said, NYC home network connections, which have a median speed of nearly 52 Mbps, are managing.

The good news is that in the majority of markets, network speeds are holding up.

But of the 88 out of 200 cities that saw declines, more than two dozen saw dips of either 20% below range or more, the data indicates. 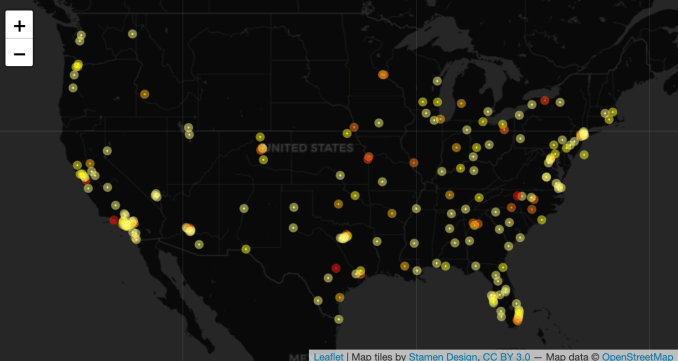 Internet service providers have been responding to the health crisis by suspending data caps, increasing base-level speeds and extending free access to low-income families during this time. But their ability to keep up with this level of high demand is being tested.

Streaming services, being one of the larger draws on bandwidth, have been lowering the quality of their streams to use less network capacity, as U.S. connectivity needs have grown. Yesterday, for example, YouTube announced it would default to SD connections to tame bandwidth demands. Amazon and Netflix have reduced stream quality in Europe. But despite record levels of network traffic in the U.S., Netflix hasn’t made any commitments to do the same in the U.S. Today, Netflix had an hour-long service interruption impacting some U.S. and European users.

Another area of concern is how well more rural areas will hold up with new stay-at-home and work-from-home orders in place. Often, these markets are only served by legacy technologies like DSL. So far, they’ve held up, BroadbandNow reports, but this could still change.