Following the announcement that it’s committing $25 million in waived fees and free services to support local businesses affected by the COVID-19 pandemic, Yelp announced a new effort this morning: a partnership with GoFundMe that will bring Donate buttons to businesses’ Yelp profiles.

Yelp says that its data shows that U.S. consumer interest in restaurants has fallen 67% since March 10, while businesses like yoga studios and breweries have seen large decreases of 78% and 85%, respectively. That’s a natural and proper response to the need for social distancing, but it leaves many business owners in dire straits.

There have been some ad hoc efforts around buying gift cards as a way to support local businesses, but GoFundMe campaigns offer a more direct and straightforward tool for — as Yelp puts it — “loyal customers [who] want to help them weather this unprecedented crisis and are looking for ways to make an immediate impact.” (I’ve also seen campaigns designed to support a businesses’ employees or an entire industry of workers.) 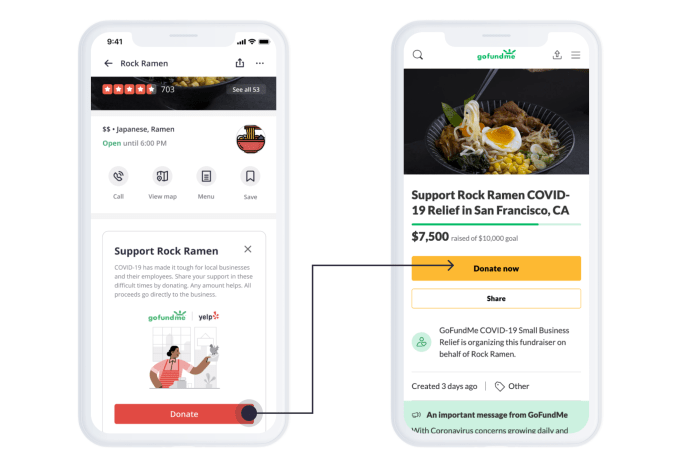 Under this new partnership, GoFundMe campaigns will automatically appear on Yelp profiles for restaurants, nightlife, beauty and fitness and active-life businesses. The companies also say that the Yelp Foundation and GoFundMe will match up to $1 million in donations, by making $500 matching grants for businesses that raise at least $500 on their GoFundMe.

Update, March 27: I mistakenly believed that the automatic part was the linking of GoFundMe campaigns and Yelp profiles, but it turns out that campaigns were created for businesses unless they opted out. Yelp has since paused this effort as it works with GoFundMe to create “a seamless way for businesses to opt into the program moving forward.”

“In addition to our recently announced relief for local businesses, this is another piece of our larger effort to respond to the widespread impact of this pandemic, and we’re continuing to explore different ways to address the challenges faced by our community,” Yelp says.

Update: Intuit QuickBooks also announced today that it’s teaming up with GoFundMe to support fundraisers to pay employees and cover business expenses, as part of Intuit’s larger $8 million investment in small businesses. And this brings the three companies’ collective commitment to the GoFundMe Small Business Relief Fund to $1.5 million.