Apple Music is launching a new playlist the company hopes will raise your spirits during these difficult times. On Monday, the service began rolling out a new personalized playlist called “The Get Up! Mix,” which features “happy-making,” sing-along music, says Apple. The playlist can be found on the “For You” tab in the Apple Music app, alongside others, including your “Favorites Mix,” “New Music Mix,” “Chill Mix” and “Friends Mix.”

And like Apple Music’s other personalized playlists, the new “Get Up! Mix” will update automatically — in this case, it refreshes with new music every Monday.

The playlist of a couple of dozen songs is built using a combination of machine learning and human curation. Algorithms determine what sort of music you may prefer, but the playlist will also be interspersed with high-energy, all-time favorites and a few newer songs selected by Apple Music’s editors. 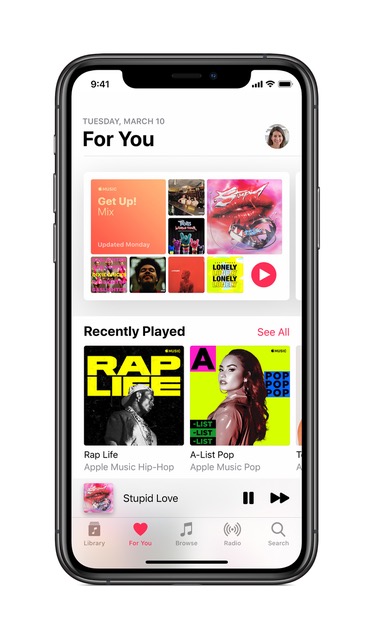 The end result is a playlist with energetic music — something that could help people who are struggling to cope with stress, anxiety and depression at a time when we’ve all been cut off from others, stuck indoors and worried about our collective future. Music won’t solve the problems induced by the COVID-19 health crisis, but it can make you feel better for a time. And we need that.

Personalized playlists have been one of the key factors that allowed Apple Music’s main rival, Spotify, to gain in popularity. But Apple Music has been steadily adding new personalization features of its own to compete.

However, another area where Apple Music lags is offering music to match a mood or activity — like studying or working out, for example. Spotify, Pandora, Amazon Music and others already let you choose from a variety of moods and activities when searching for something to listen to. 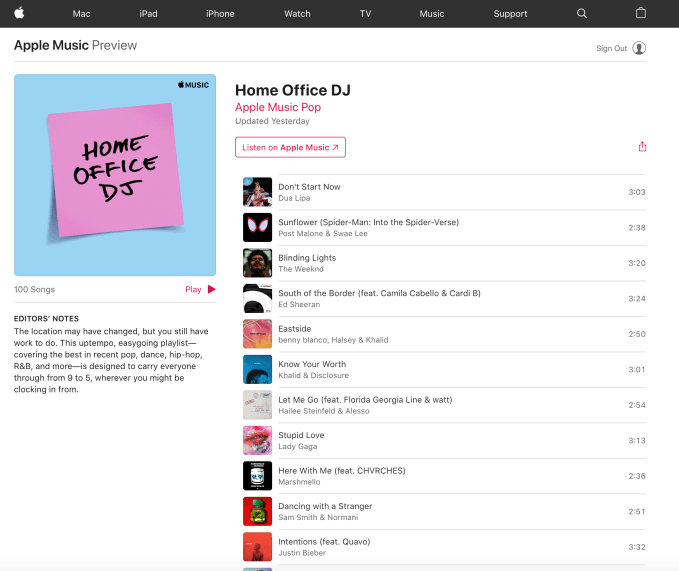 While Apple Music doesn’t yet have a comprehensive selection on this front, it has now added a new programmed playlist, the Home Office DJ. As the name suggests, the playlist is designed for those now working from home who were used to having music play in their office. At launch, this playlist includes music from artists like The Weeknd, Post Malone, Dua Lipa, Ed Sheeran and more.

In addition, Apple on Monday launched Live Lyrics on the Mac. The company says it will soon add more to Apple Music, including new radio shows, videos and other playlists.