Back in 2017, a formerly hot, formerly profitable company called Blue Apron went public. It didn’t go well. Today as the global stock market continues to fall, shares in the former venture darling are soaring, up more than 140% in midday trading.

Before its IPO, the company had to reduce its price range from $15 to $17 per share to $10 to $11 per share. That pricing change limited the company’s worth, and reduced the capital it raised in its debut. The meal kit delivery company finally priced at $10 per share. It opened up a hair, but closed the day a mere penny above its IPO price.

Then things got worse. In fact, Blue Apron’s share price decline got so bad that in mid-2019 Blue Apron had to execute a 1-for-15 reverse split. In most stock splits, a company’s share price gets too high for comfort. So, the firm decides to give its investors the same value of the company, but in new, smaller chunks. So a concern trading for $1,000 per share that wanted to split would normally give, say, its investors 10 new shares worth $100 apiece in exchange for their single $1,000 share.

As Uber and Lyft continue to melt, the 2019 unicorn class loses its shine

A reverse split is the other way. You get fewer shares at a higher per-share value. It’s what you do if you need to avoid slipping under $1 per share, or other, similar fates.

Time passed, and everyone forgot about Blue Apron in the same manner as they did Grubhub, companies that came, made an impact, went public and then slowly dissolved.

Until now. Suddenly Blue Apron is the hottest stock in the world, skyrocketing as other companies shed value. Today in regular trading, American indices fell so far that they triggered protective circuit breakers. At the same time, Blue Apron was doing this (via Google Finance): 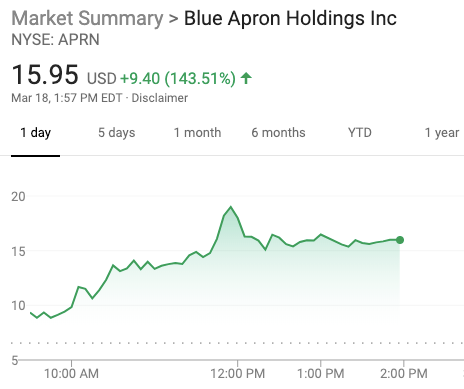 Bear in mind that we are looking at the company after its reverse split. So, no, the company is not worth 60% more than its IPO price of $10 per share. It’s worth far less. Indeed, Blue Apron is worth just $211 million today including its day’s gains, according to Google Finance.

Blue Apron was worth about $1.9 billion when it went public, for reference.

Anyway, why is the company skyrocketing? TechCrunch thinks it figured it out. Walk with us:

Don’t pop the champagne. Blue Apron is still worth about what it raised as a private company; its market cap is only about 40% of the money it raised while private in addition to its IPO haul. This company is still priced like it’s on life support.

And that makes some sense. Here are some facts from its Q4 and full-year 2019 report:

Not great! Perhaps Blue Apron will explode, beating guidance and earning its newly resurrected share price. Maybe. But before you pile into the company, pause, and then probably don’t.