As the COVID-19 pandemic spreads across the U.S., grocery delivery apps have begun seeing record numbers of daily downloads, according to new data from app store intelligence firm Apptopia. On Sunday, online grocery apps, including Instacart, Walmart Grocery and Shipt, hit yet another new record for daily downloads for their respective apps, the firm says.

Comparing the average daily downloads in February to yesterday (Sunday, March 15), Instacart, Walmart Grocery and Shipt have seen their daily downloads surge by 218%, 160% and 124%, respectively.

Typically, these apps (except for Shipt) see tens of thousands to as many as 20,000+ downloads per day. But on Sunday, Instacart saw more than 38,500 downloads and Walmart Grocery saw nearly 54,000 downloads, the firm says. Shipt, though hitting record numbers, saw only 7,285 downloads on Sunday. To some extent, its lower figures could be due to Target’s move to integrate Shipt’s grocery delivery service, which it owns, into its main app. 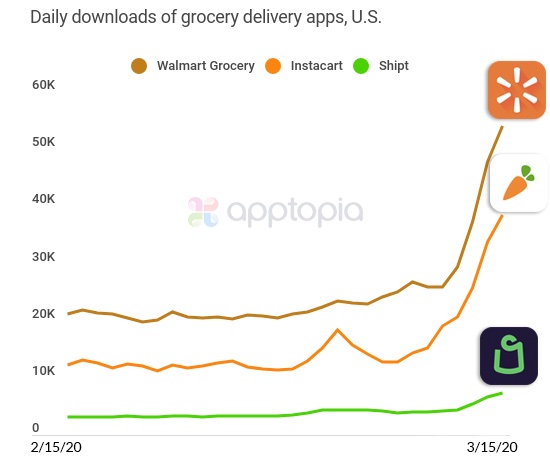 In fact, the Target app has also broken records for daily downloads, the report found. On Sunday, Target’s app saw more than 53,100 daily downloads; a month ago, it was seeing 25,000+.

Walmart very recently announced it would merge its grocery delivery service into its main app, as Target has done. But for now, consumers are still seeking and downloading its standalone grocery app at record levels. 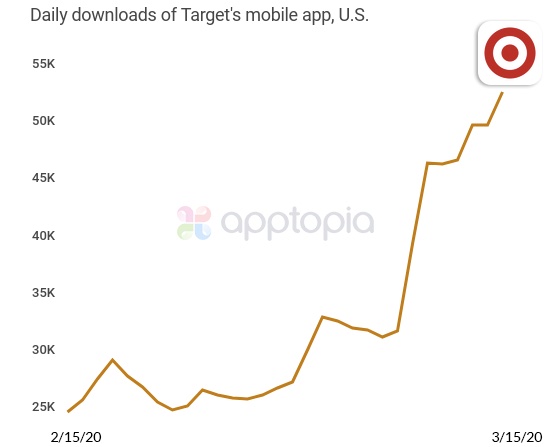 These grocery delivery apps are in demand more than ever during this health crisis.

With government mandates to practice “social distancing,” U.S. consumers have been stocking up for long weeks to be spent at home. Stores were cleared of key supplies, like toilet paper, and several also saw long lines and crowds as panic-buying set in. Grocery delivery and pickup, meanwhile, presents an easier option — as well as one where you could limit your exposure to other people. With grocery pickup, consumers only have to interact with a single store employee from their curbside parking space. And with grocery delivery, most orders can simply be left on the doorstep with no person-to-person contact required.

Several grocery delivery services, including Instacart and others, promoted the fact they would add a “contactless” delivery option, which helps contribute to the huge sales boost. On Thursday, Instacart said its sales growth rates for the week was 10 times higher than the week before, and had increased by as much as 20 times in areas like California, New York, Washington and Oregon.

Apptopia’s report didn’t analyze the impact of the coronavirus outbreak on Amazon’s grocery delivery business, which includes Amazon Fresh and Whole Foods deliveries. This is more difficult to do because Amazon grocery orders aren’t placed inside a dedicated app, as with Instacart. However, Amazon confirmed a technical glitch on Sunday affected online orders through both its grocery delivery services, which the company attributed to the increase in online shopping.

“As COVID-19 has spread, we’ve seen a significant increase in people shopping online for groceries,” an Amazon spokeswoman explained, in a statement shared with Bloomberg. “This resulted in a systems impact affecting our ability to deliver Amazon Fresh and Whole Foods Market orders [on Sunday night]. We’re contacting customers, issuing concessions, and are working around the clock to quickly to resolve the issue,” they added.

Amazon Prime is also expected to experience delays and shortages as consumers stock up on non-grocery household items, the company says.

But even as grocery delivery booms, the market for food delivery apps has not seen the same results.

Despite promises for contactless delivery from several providers, including Uber Eats, food delivery apps are not experiencing a similar surge in daily downloads. According to Apptopia, the food delivery market earlier in March was starting to cool off. It later began to pick up but then cooled off again as consumers realized the expense of ordering food compared with home cooking, and because some consumers view restaurant delivery as not being as safe as cooking at home. 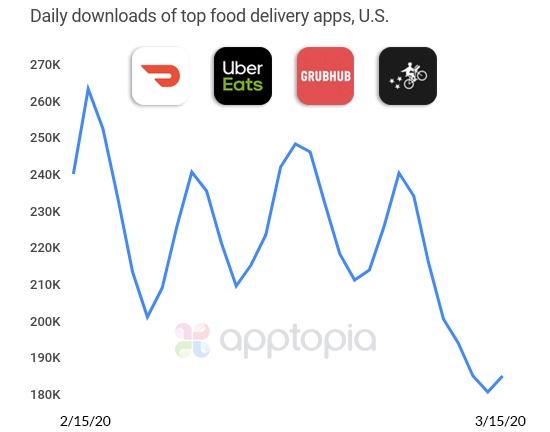