Edtech has been a hot category for investors for some time. Surging demand for better classes globally from new entrants to the knowledge economy has pushed revenues to new highs. Now, coupled with the rapid propagation of the coronavirus forcing dozens of colleges and universities to shut down and move entirely online, the sector is even further in the limelight.

New York-based Teachable rode that wave since its founding in 2013 as Fedora, creating a marketplace for teachers to sell their online courses and build up their own classroom businesses. I covered the startup’s $2 million seed round way back in 2015, and TechCrunch also covered the company’s $4 million series A in 2018.

Now, I get to cover the company’s acquisition by Amsterdam-headquartered Hotmart, a global platform for online courses with deep penetration in Brazil and the global Portuguese and Spanish markets. Sources with knowledge of the transaction said that the acquisition was for around a quarter-of-a-billion dollars, which, if roughly true, would be well above Teachable’s last disclosed valuation of $134 million in 2018.

Teachable has seen prodigious GMV growth on its platform since launch. In total, CEO and founder Ankur Nagpal told me that the platform has driven half a billion in earnings for teachers on its platform, with nearly half of that sum coming in the past year. 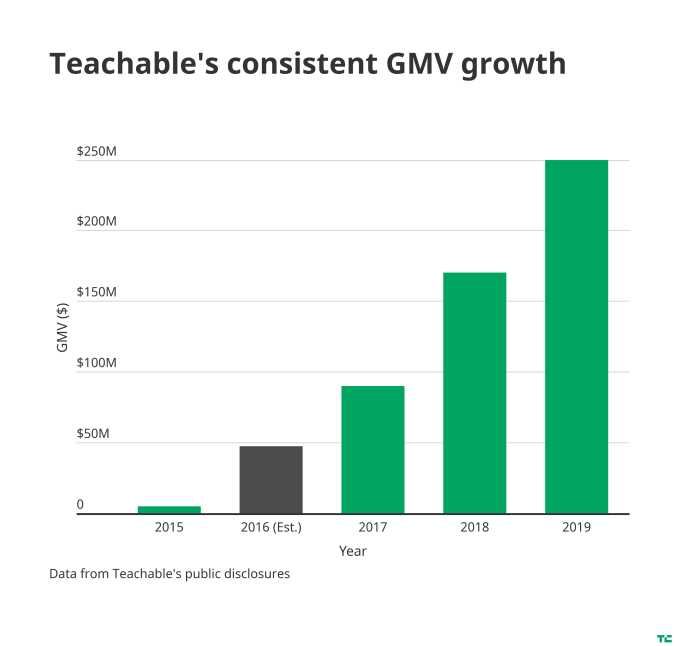 That growth has also driven revenues to the bottom line. Unlike some online education marketplaces, Teachable is a SaaS revenue business, and teachers pay a monthly or annual subscription to sell and manage their classrooms (unless they are on the company’s “Basic” plan, in which a 5% revenue fee is also taken). Currently, its “Professional” plan is priced at $99 per month or $948 ($79/month) if billed annually, which includes unlimited students and five admin user accounts.

Nagpal said the company hit $21 million in revenue in 2019, and is currently on a $25 million run rate, compared to $14 million in the prior year. The company is not profitable, but its losses were “under $2 million” according to him. The company states that more than 20,000 students are taught every day across the classrooms on Teachable.

A photo of Teachable’s team (Photo via Teachable)

Explaining the rationale behind selling to Hotmart, Nagpal said that he liked the fact that Hotmart and Teachable have similar missions but very divergent markets, with Teachable focused on the English-language market and Hotmart proving competitive in the Portuguese and Spanish markets. “Synergistically, it just made a ton of sense … we instantly become one of the most valuable online education companies.”

Hotmart is a private company that’s approaching a decade in operation. The company recently received an infusion of cash from Singapore’s GIC and General Atlantic in disclosures last year. Teachable is a smaller company than its new parent, with offices in New York and Durham, N.C., but together, the combination of platforms, GMV and revenues will likely make it a major competitor in the online course space.

Today, that market includes companies like Udemy, which has raised $223 million in venture capital since its founding a decade ago, and Pluralsight, which went public in 2018 on Nasdaq after raising $192 million in VC and is currently valued at approximately $1.40 billion (experiencing the same public market headwinds as every other company these days). Those VC fundraise numbers are from Crunchbase.

Teachable has never raised that level of VC dollars, which makes its exit look much more financially favorable than is typical for edtech companies. Crunchbase has a total of $12.5 million in VC across a couple of rounds, with lead investor Accomplice being one of the presumed major winners in the acquisition, along with Naval Ravikant and Learn Capital. Most of these investors will cash out, except with Accomplice taking a stake in Hotmart to continue its journey with Teachable.

In the other direction, Nagpal himself has also invested as part of Accomplice’s Spearhead fund, in which founders are given small checkbooks to seed invest in promising startups.

Teachable is not changing its branding, mission or strategy, but hopes to use the leverage from a larger parent company to expand into more international markets and to cross-promote each other’s products. Nagpal will stay on as CEO of Teachable, reporting to the CEO and co-founder of Hotmart, João Pedro Resende.

Where top VCs are investing in edtech