The templates give a consistent and professional look to these documents, which might otherwise be produced in a word processor like Word or Google Docs. While customers are free to customize these any way they like, the templated approach means these businesses don’t require a designer to create quality-looking documents.

Company co-founder and CTO Serge Barysiuk says the startup has had a vision for some time that sales documents would be more interactive than a static PDF or Word document, and they have invested a lot of resources into building a more interactive document editor, while enabling the sales team to see usage statistics like document opens, time on pages and so forth.

“We have added a new document builder editor to our platform, which helps you create documents that you can personalize and merge data, and that are also interactive,” Barysiuk told TechCrunch. 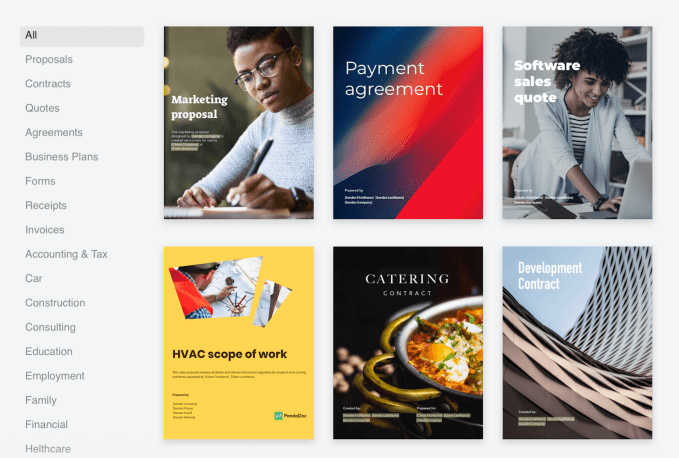 He says this means their documents contain business logic and data, but also has a professional look and feel, whether being viewed online or on a mobile device.

Barysiuk says the company recognizes that some customers will be using Word and other tools to produce boilerplate content, and users can import existing documents into the PandaDoc editor where appropriate.

In addition to the document editing capabilities, the company provides a general workflow to support sales teams from proposal to contract to digital signing — and even collecting funds.

PandaDoc launched in 2011 and has raised just over $21 million on a post valuation of $70 million, according to PitchBook data. The company reports it has 250 employees with over 17,000 customers, the majority of whom are SMBs, who have closed more than $20 billion in deals on the platform.

The company’s last raise was $15 million in 2017, led by Rembrandt Venture Partners.