In the age of coronavirus, we all have to resist the urge to touch our faces. It’s how the virus can travel from doorknobs or other objects to your mucus membranes and get you sick. Luckily, a startup called Slightly Robot had already developed a wristband to stop another type of harmful touching — trichotillomania, a disorder that compels people to pull out their hair.

So over the last week, Slightly Robot redesigned their wearable as the Immutouch, a wristband that vibrates if you touch your face. Its accelerometer senses your hand movement 10 times per second. Based on calibrations the Immutouch takes when you set it up, it then buzzes when you touch or come close to touching your eyes, nose, or mouth. A companion app helps you track your progress as you try to keep your dirty mitts down. 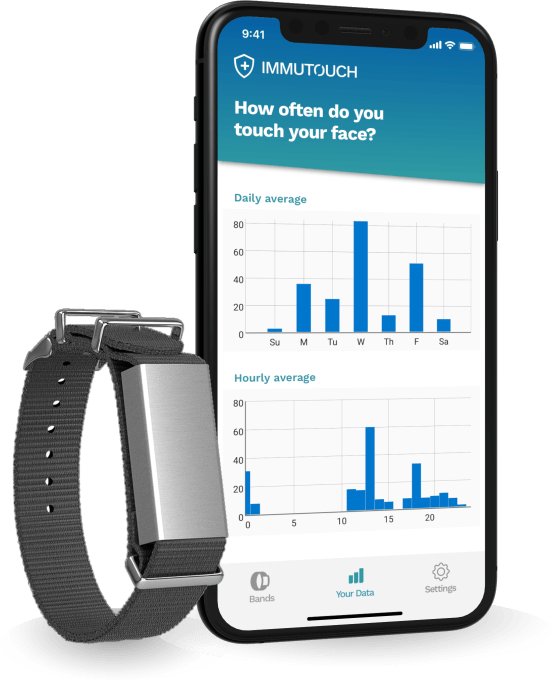 The goal is to develop a Pavlovian response whereby when you get the urge to touch your face, you don’t in order to avoid the buzzing sensation. Your brain internalizes the negative feedback of the vibration, training you with aversive conditioning to ignore the desire to scratch yourself.

“A problem the size of COVID-19 requires everyone to do their part, large or small,” says Slightly Robot co-founder Matthew Toles. “The three of us happened to be uniquely well equipped to tackle this one task and felt it was our duty to at least try.”

The Immutouch wristbands go on sale today for $50 each and they’re ready for immediate shipping. You can wear it on your dominant hand that you’re more likely to touch your face with, or get one for each arm to maximize the deterrent.

“We’re not looking to make money on this. We are selling each unit nearly at cost, accounting for cost of materials, fabrication, assembly, and handling” co-founder Justin Ith insists. Unlike a venture-backed startup beholden to generating returns for investors, Slightly Robot was funded through a small grant from the University of Washington in 2016 and bootstrapped since.

“We built Immutouch because we knew we could do it quickly, therefore we had the obligation to. We all live in Seattle and we see our communities reacting to this outbreak with deep concern and fear” Slightly Robot co-founder Justin Ith tells me. “My father has an autoimmune disease that requires him to take immunosuppressant medication. Being in his late 60’s with a compromised immune system, I’m trying my best to keep the communities around him and my family clean and safe.” 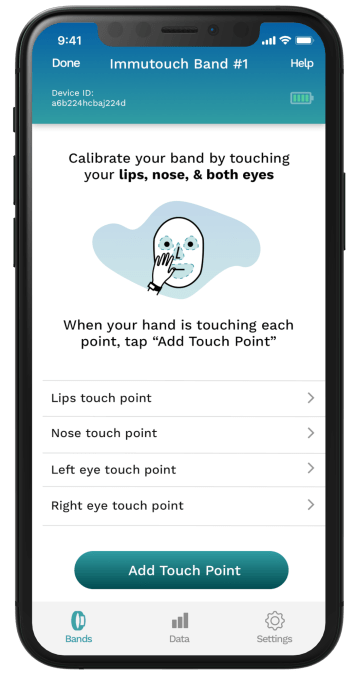 How to calibrate the Immutouch wristband

Based on a study using wearable warning devices to deter sufferers of trichotillomania from ripping out their hair, Immutouch could potentially be effective. University Of Michigan researchers found the vibrations reduced long and short-term hair pulling. Ith admits you have to actually heed the warnings and not itch to instill the right habit, and it doesn’t work while you’re lying down. The Immutouch stops short of electrically shocking you like the older gadget called Pavlok that’s designed to help people quit smoking or opening Facebook.

Perhaps smartwatch makers like Apple could develop cheap or free apps to let users train themselves using hardware they already own. But until then, Ith hopes that Immutouch can gain some initial traction so “we can order larger quantities, reduce the price, and make it more accessible.”

Modern technologies like Twitter for rapidly sharing information could encourage people to take the right cautionary measures like 20-second handwashing to slow the spread of coronavirus. But having phones we constantly touch — before, during, and after we use the restroom — and then press against our faces could create a vector for infection absent from pandemics of past centuries. That’s why everyone needs to do their part to smooth out the spike of sickness so our health systems aren’t overrun.

Ith concludes, “Outbreaks like this remind us how we each individually affect the broader community and have a responsibility to not be carriers.”