Reddit, a discussion website and home to thousands of communities, announced this week a new partnership with mental health service Crisis Text Line. The company offers a mental health text line offering live, 24/7 support for people in crisis, including those considering suicide or engaging in self-harm. With this partnership, Reddit users will be able to flag others whose posts indicate they’re struggling or in crisis. The flagged user is then immediately sent a private message offering them resources and an optional helpline where they’ll be connected with a crisis counselor.

Unlike helplines in the past, which required users to call in, Crisis Text Line instead operates over text — the preferred communication mechanism for a generation who grew up with smartphones, and who may feel that phone calls are too intimidating.

To get started, they’ll be prompted to text the phrase “CHAT” to 741741. They can then text with their counselor for as long as they need, and the counselor will help them sort through their feelings and thoughts, ask questions, empathize and actively listen.

The person who flagged the user can also get help through the same service, as taking that step can be triggering. 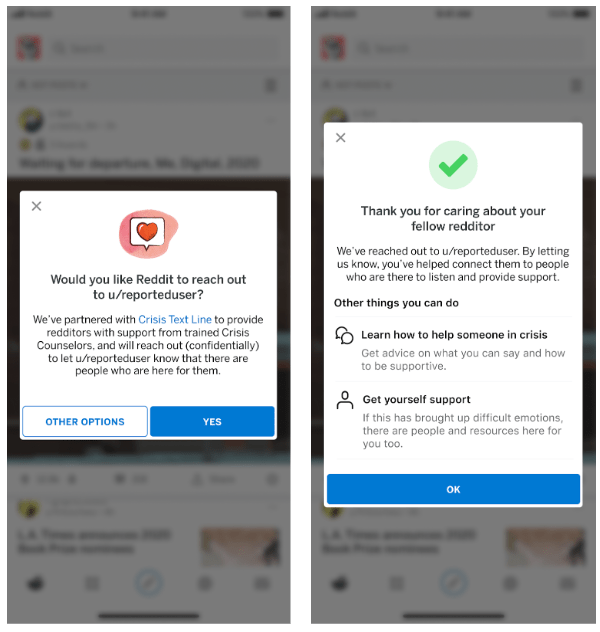 The option to report a post or comment is available directly from the post, by selecting the reporting option: “Someone is considering suicide or serious self-harm.” You also can visit the person’s profile directly and select: “Get them help and support.” (On the web, this is under the “more options” section.)

Reddit also notes that the person in crisis won’t be sent multiple messages in short succession, even if a number of people flag and report their post. And it will have a link to report “messages received in error” so Reddit can monitor for abuse of the feature.

Crisis Text Line has said in the past that only 30% of its cases are about suicide, and because it’s able to de-escalate the situation it only engages it an “active rescue” (meaning the phone number is provided to a 911 center) in 0.82% of conversations. The counselor doesn’t otherwise have the texter’s phone number, which is encrypted, and they will not call the texter. 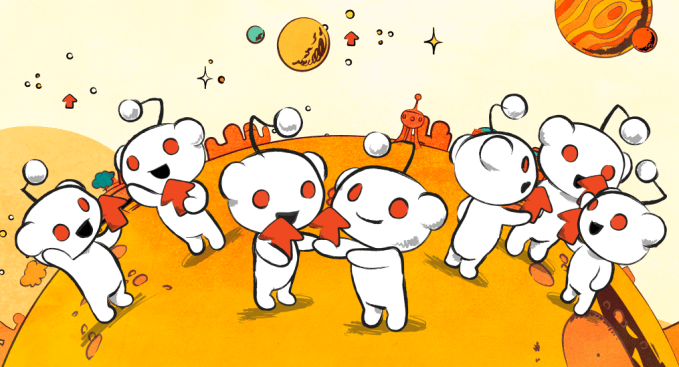 Reddit decided to partner with Crisis Text Line because of how often its platform is used for support. Today, the company already offers a number of forums where users can get help facing challenges in their life — like quitting smoking or drinking, getting pregnant or addressing anxiety and depression, for example. There are also communities solely focused on finding someone to talk to, says Reddit, like r/KindVoice and r/CasualConversation.

“On Reddit, people are able to find community around an infinite number of topics relevant to them – and as an anonymous platform, we provide a space for people to express the most vulnerable parts of themselves,” the company wrote, in its announcement.

Of course, if Reddit wants to host communities like this, it also has a responsibility to its users to provide safety mechanisms and reporting features.

“We’re thrilled to be partnering with Reddit, where redditors can feel safe and supported by their community, 24/7,” added Bob Filbin, co-founder and chief data scientist of Crisis Text Line, in a statement. “Reddit has proven to be thoughtful leaders in the online safety space as they ensure users have access to trusted mental health resources at all times,” he said.