Sendbird is announcing a major update to its chat API for web and mobile today. With this, Sendbird is adding numerous new features to its service that will make it easier for its customers to moderate images, build custom moderation tools for their specific needs and add reactions and delivery receipts to their chat interfaces.

The company, which was founded in Seoul, says it currently serves about 90 million active users across the globe and sends out about 1.5 billion messages per month. Sendbird CEO John Kim tells me that the company is especially strong in the on-demand services space with customers like Gojek, iFood and Delivery Hero, as well as marketplace services like Carousell, Paytm, Traveloka and SSG, and community sites with customers like Reddit, Dream 11 and Yahoo Fantasy Sports (Disclosure: Yahoo is owned by VMG and hence has the same corporate parent as TechCrunch). 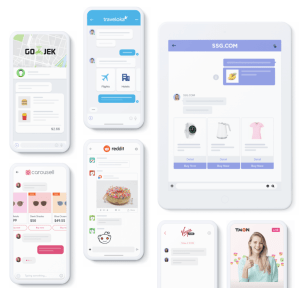 “We’ve seen a lot of recent growth in healthcare for both care provider to patient chat as well as for benefits management,” he added. “These tend to be digital-first disruptors like Accolade, Livongo and Grand Rounds. We have pockets of customers in gaming, dating and live streaming.”

As for today’s updates, quite a few of them focus on moderation. There’s a new image moderation feature, for example, as well as a new RegEx profanity filter that gives moderators a lot of options for how to prevent specific messages from getting through. Sendbird now also offers a GDPR-compliant API and a moderation API that its customers can use to extend the company’s built-in options.

Also new are offline sync for caching messages locally when there is a service interruption, on-demand translation to augment Sendbird’s auto-translation feature and the ability to translate push notifications.

This focus on translation doesn’t come as a surprise. Sendbird has a global customer base and the company has long been a strong player in the APAC region. Now, however, Kim tells me, its customer base is spread pretty evenly between the U.S., EMEA and APAC.

What users are most likely to notice, though, is that Sendbird customers can now add reactions to their chat interfaces, making them feel a bit more like a modern messaging app on a smartphone. In addition to that, Sendbird is adding delivery receipts and full-text search capabilities.

“If you think about it, chat/messaging was one of the first uses of technology (telephone, fax) and then the internet (chat rooms, IRC and ICQ),” Kim said when I asked him why he thinks in-app chat is now taking off. “During the desktop era, chat was limited by access to a modem and when you were at home. But the mobile era and cheap access to 3G/4G networks and Wi-Fi has unlocked global and democratized access to chat. As smartphone adoption grew, especially in developing and heavily populated countries where people bypassed older technologies like desktops and email, the use of chat became the norm.”

He argues that in the messaging space, network-effects drive the market toward a small number of players (think WhatsApp, WeChat and Facebook Messenger) — and over time, customers simply expect the same kind of convenience from the companies they deal with on a daily basis.

“Now everyone else has to catch up and ensure their experience meets the new normal,” he noted. “But most don’t have the talent or know-how to get there or compete. Hence the current popularity and growth of chat APIs.”