AT&T is expanding its streaming strategy with the launch of a new, nationwide TV service, AT&T TV, delivered over the internet. Not to be confused with AT&T TV Now — AT&T’s over-the-top live TV service aimed at cord-cutters, previously called DirecTV Now — the new service is more of an alternative to AT&T’s DirecTV.

The company apparently believes it can access an untapped sweet spot in between those who just want to use streaming apps and those who want a traditional pay-TV service, like cable or satellite television. To cater to this audience, AT&T TV offers hundreds of live TV channels, plus 40,000 on-demand titles, and 500 hours of DVR space on a set-top box.

The box, however, is a bit more modern. The service comes with an Android TV-powered box that lets you switch between live TV and over 5,000 apps from the Google Play Store without having to change inputs on your TV. At launch, that means customers are able to access popular streaming apps like Netflix, YouTube, Pandora and Spotify right from their TV. When AT&T’s new service HBO Max arrives in May, it will also be available and there may be special offers for AT&T TV customers. 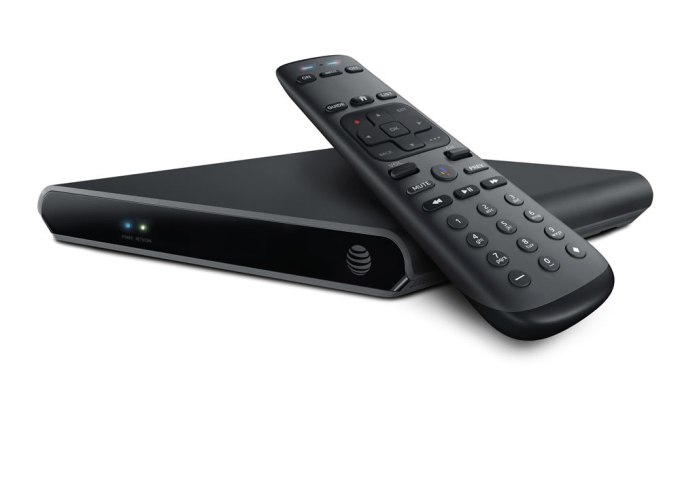 The Android TV box also includes a voice-activated remote and Google Assistant integration, which lets you issue commands to search for content across your apps, play music, or control your smart home devices.

Through an accompanying mobile app, customers can also record shows and stream TV from a smartphone or tablet.

Despite the method of delivery, AT&T TV is very much like a traditional pay-TV package rather than the streaming apps it tries to emulate. And it’s an expensive one. The company offers affordable introductory pricing, but ropes you into a two-year contract where prices jump significantly in year two. For example, the entry-level Entertainment package is $49.99 per month for the first 12 months, then it goes to $93 per month in year two. Choice and Xtra, meanwhile, go from $54.99 and $64.99 per month to $110 and $124 per month, respectively. Ultimate jumps from $69.99 to $135 per month.

Choice and higher packages have the option of adding regional sports for $8.49 per month more. 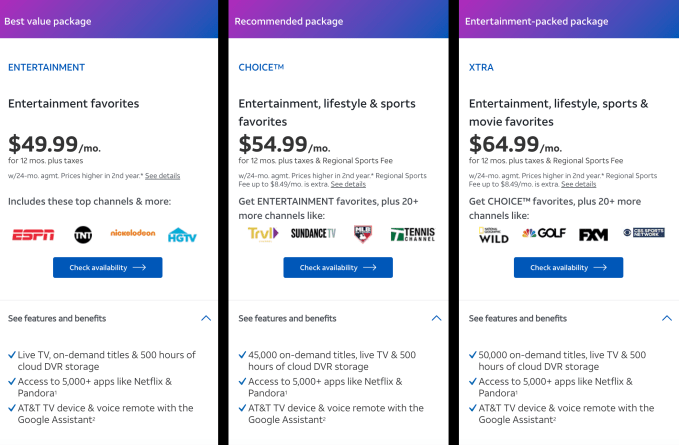 And like traditional pay-TV services, there’s an activation fee ($19.95), early termination fees ($15/month for each remaining month) and equipment non-return fees. It also comes with only one set-top box, and additional boxes are $120 each.

The somewhat better deal is to bundle AT&T TV with AT&T’s new 1-gigabit internet service, where the bundles begin at introductory pricing of $39.99 per month for video and $39.99 per month for internet for 12 months, under a two-year contract. But when prices climb in year two, the savings won’t really matter as much.

The streaming service arrives at a time when AT&T is shedding video subscribers. In 2019, the company lost 4.1 million total video customers.

But offering a streaming service with a traditional pay-TV business model attached is an odd strategy on AT&T’s part that fails to address the main reasons that consumers were cutting the cord with traditional pay-TV providers in the first place. Mainly, pay-TV services cost too much and customers felt they were nickel-and-dimed with fees. That hasn’t changed here. In addition, there’s plenty to watch today on much more affordable services, like Netflix, Hulu, Amazon Prime Video and Disney+, for example. And there’s more still, if you’re willing to tack on a few more dollars per month for over-the-top subscriptions of premium channels, like Starz, Showtime or AT&T’s own HBO.

However, there is a part of the market that wants a combination of pay-TV and streaming apps. Comcast targets these customers with its X1 platform, for instance.

AT&T TV may also appeal to those who didn’t want the hassle of setting up or dealing with a satellite dish — or lived somewhere the satellite service didn’t reach. In the end, AT&T TV may even pick up existing DirecTV subscribers who just want to upgrade from one pay-TV service to another.