Tempo wants to be the Peloton of barbells. It’s a 42-inch tall screen with 3D machine vision that tracks and teaches you as you workout. The giant upright HD display makes it feel like your personal trainer is right there with you while you compete with others in live and on-demand classes.

Tempo opens for pre-orders today for $1995, requiring a $250 deposit and $39 monthly content subscription before shipping this summer. 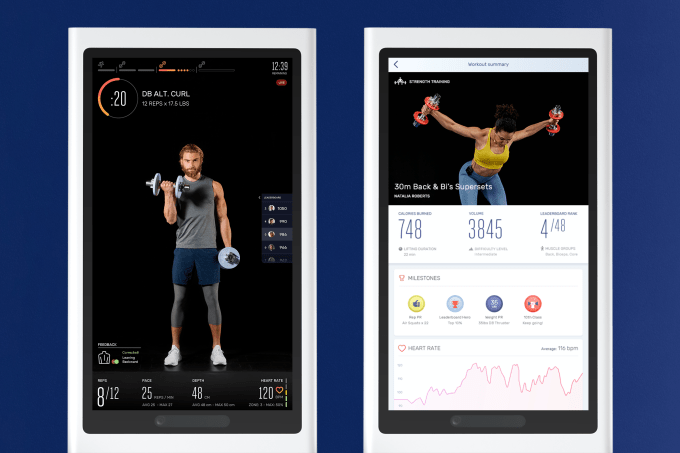 “Every single product in the market took a piece of equipment out of a gym and slapped a screen on it” says Tempo CEO and co-founder Moawia Eldeeb. “You need to be able to see a user to actually be able to give them guidance so they can work out safely. We wanted to build a fitness experience from the ground up with training and form feedback at the core of it.”

I demo’d Tempo this week and found the in-home convenience, motivational on-screen personal trainers, and the real-time posture corrections gave me the confidence to lift weights without the fear of injury. It might not feel quite as fun and addictive as Peloton, but it offers a facsimile of personal training that’s more affordable than in-person classes that cost $100 or more. 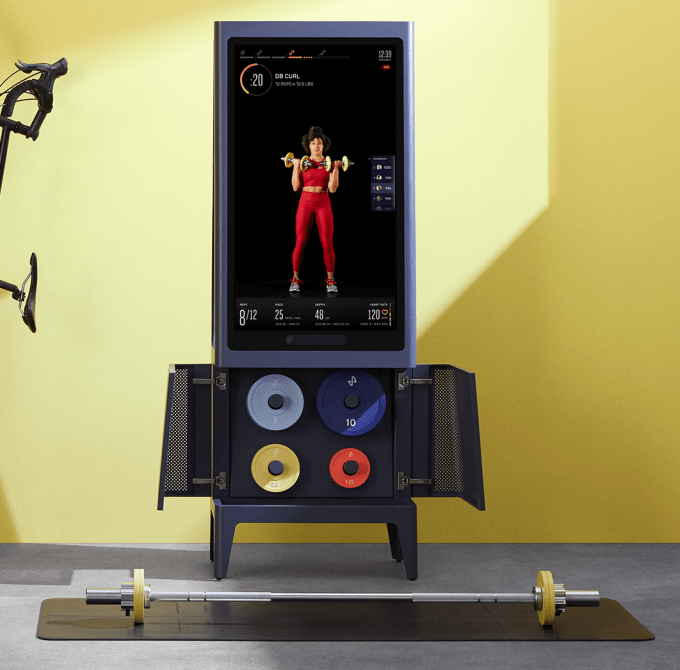 The idea of democratizing access to trainers is what convinced Eldeeb and the Tempo team to stretch its initial $1.8 million in seed funding for four years. While collecting data from its SmartSpot in-gym weight lifting assessment device, Tempo survived long enough to build this prototype.

“Most investors had given up on us. We built this product and had just $700,000 left” Eldeeb recalls. But once people could try Tempo, “we pitched 10 investors and got 9 term sheets. It got very competitive.” The startup recently walked away with a $17.5 million Series A round from Founders Fund, DCM, and Khosla Ventures. Now Tempo will pour that cash into marketing, retail distribution, R&D, and content production.

A founder’s journey out of homelessness

Tempo’s mission is to change people’s lives for the better like personal training did for Eldeeb. “Training is what took me out of a homeless shelter and got me to where I am I today” he reflects. 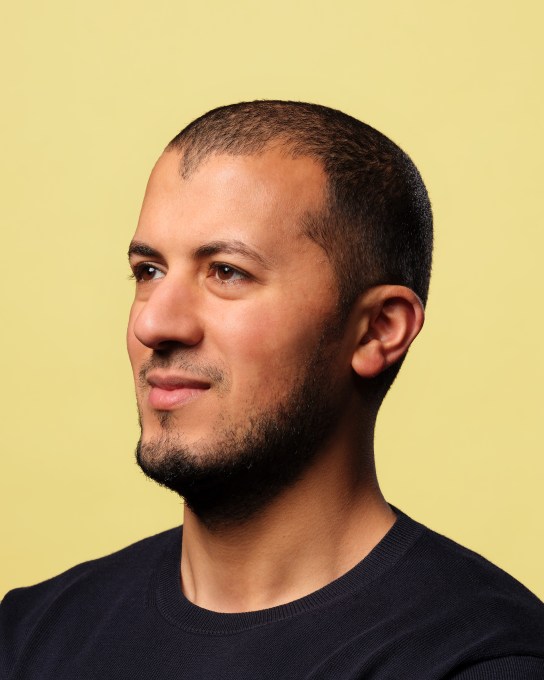 Eldeeb’s family immigrated to the US from Egypt when he was nine. But after an explosion leveled their building, they wound up in a homeless shelter. Eldeeb eventually dropped out of middle school to work in a pizza parlor and help pay the bills. But personal trainers at a local YMCA took him under their wing. He eventually paid his way through a computer science degree at Columbia University by working as a personal trainer to his eventual co-founder and CTO Josh Augustin. “Having trainers say you’re getting stronger taught me I could do something for myself.”

While at school, Eldeeb was developing an idea for a physical therapy wearable while Augustin was building 3D sensors for guiding robot perception. They soon realized that a combination of these ideas “offered us the possibility to deliver on the promise of guiding your form and tracking your progress accurately.”

In 2015, they started a company called Pivot to build SmartSpot — a similar looking upright screen that was designed for gyms. It could track users, but only output raw data about their form, like how bent a user’s knees were during a squat. It then worked with trainers to annotate the data to determine what movement patterns were safe and which were dangerous.

Gym owners bought in because it let them track which trainers were actually helping customers improve. “It held trainers accountable. If you weren’t delivering results, it’d be obvious” Eldeeb tells me. The company built up a dataset of over from over 1 million 3D tagged workouts, from hundreds of gyms, overseen by thousands of trainers. That formed the basis of the artificial intelligence that would let Pivot pivot into Tempo.

At first, Tempo’s giant screen and black or white armoire can feel a bit daunting. The thing is about six feet tall, though it only takes up as much room as a large chair. It makes efficient use of space, with the barbell and dumbbells racked on the back, an internal shelf for the foam roller and mat, and a soft-closing cabinet on the front with the rubber-coated weight set. Keeping everything together means you won’t have to go digging in your closet to start a work out.

Tempo walks users through an initial computer-vision fitness assessment to understand your strength and flexibility so it can set base levels for its exercises. If you have an injury it needs to nurse, Tempo connects you to a human personal trainer that helps customize your workout plan. Otherwise, it uses your goals and data to set out a progressive regimen that gets a little tougher each day. It even blocks you from jumping into later classes so you don’t strain yourself. 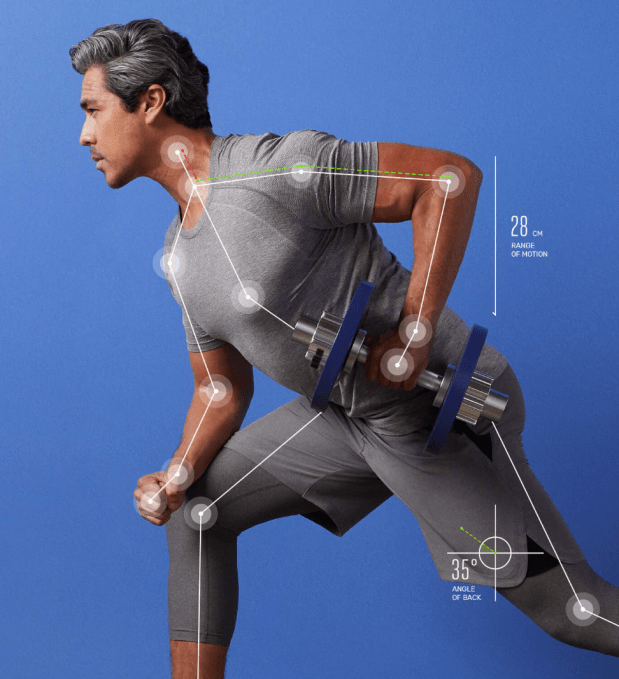 Your workout plan begins with tutorial sessions that teach you to do the exercises with safe and proper form. When I was hunching forward during my squats, Tempo’s computer vision would ding me with instant feedback to keep my knees back and chest up. Then once I’d corrected the issue, it congratulated me with little green checkmarks. “Any product that doesn’t offer that is no better than a DVD or YouTube videos” Eldeeb remarks.

From there I could choose between a variety of class styles and lengths, ranging from high intensity interval training circuits to isolated sessions focused on particular muscle groups. In each, you watch a near life-size personal trainer doing the routines right in front of you while they demonstrate form and drop inspirational quotes.

Tempo is producing seven live classes per day from its San Francisco studio which you can also watch on-demand. You can compete against friends or strangers, and Tempo compares you rep for rep so it’s more about perfect form than reckless speed or weight. The live trainers can actually see all your data and your mistakes on a dashboard as they lead classes, and can call you out for screwing up (though you can deactivate this shame mode). Eldeeb says “knowing the trainer can possibly see your numbers will motivate you to actually do this right.”

The class selection interface is suspiciously similar to Peloton’s, though that at least will make it familiar for some. Over time, you build up an immense collection of data on your performance in each work out, excercise, and muscle. Unlike hitting the gym by yourself, you’ll never struggle to remember how much weight to use or whether you’re improving. Classes are soundtracked with dancey remixes sourced from a partnership with Feed.fm to avoid the royalty issues with original songs that slapped Peloton. 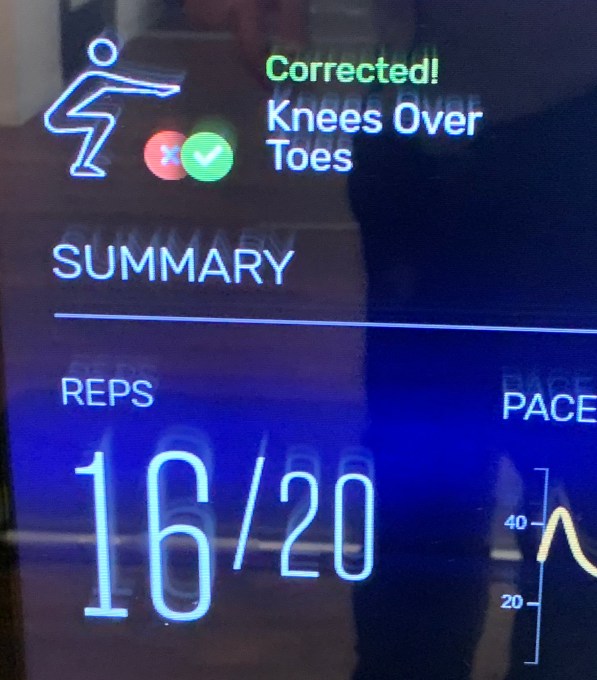 Tempo gives feedback when you’re doing exercises wrong, and when you correct yourself

For a 14-person startup, Tempo is trying to do a ton and that can leave some rough edges. The bluetooth armband heartrate monitor can have connectivity issues and the computer vision doesn’t always register every rep, especially if your posture is off. Classes also fail to include enough stretching to prevent strains, instead devoting the start of classes to warmups that ease you in but might not protect your muscles well enough. My quads were destroyed after my demo.

Tempo still achieves its primary objective: it makes weight lifting accessible. No need to drag yourself to the gym or be beholden to a trainer’s schedule, where I’d always end up arriving late and wasting 25% of my session. The form feedback fixes my core complaint about remote personal training app Future I’ve been using for nine months, which can’t see you. That’s led to minor injuries from bad sit-up posture and other incorrect movements. Tempo can’t catch everything, but it can nip some of the most common mistakes in the bud.

Eldeeb was blunt when asked why Tempo is better than well-funded competitors like $3000 Tonal’s wall-mounted resistance cable-based training system or the $1500 Mirror’s massive screen.

“The biggest problem with Tonal is two-fold. Cables and motors do not last. I want this product to be in your house for 10-plus years. [Tempo] is in gyms running 24/7 in for 3 years and it’s still working. The second biggest thing is just feedback.” While Tonal does include a camera and microphone it might employ in the future, it’s not scanning you to detect when you’re lifting weights crooked like Tempo.

As for Mirror, “What is the difference between ClassPass Live and Mirror? It doesn’t come with any equipment, and there’s no training. It’s just a two-way mirror and a Samsung LED panel behind it with an arduino board” Eldeeb rails. He claims it can’t actually monitor your workouts and that his team’s tests found Mirror would say they’d burned 500 calories when they were literally just sitting on their couch in front of it. 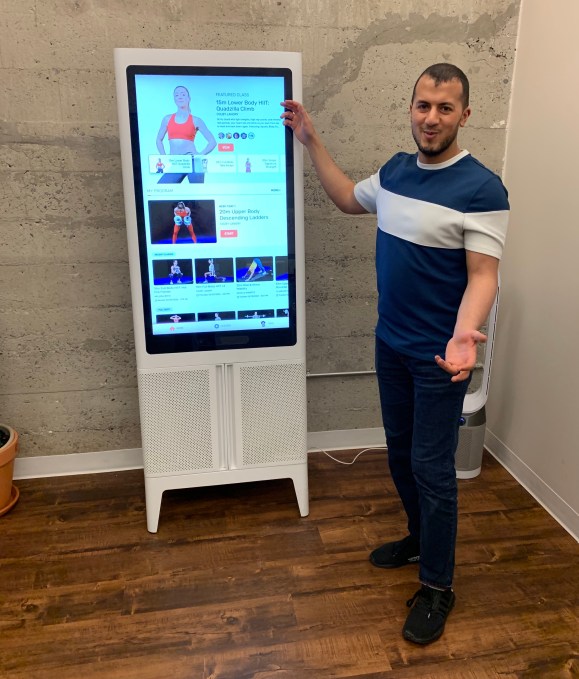 If the software proves to have high retention so people actually recommend Tempo to friends, the biggest hurdle will be its price. You can buy a couple dumbbells for $50 or get a barbell weight bench for a few hundred. Even if Tempo’s $55 per month financing option plus $39 subscription makes it cheaper than a single personal training session or on-par with a gym membership, it could still seem like a serious commitment.

That feeling is magnified by how all of its equipment and classes and data can feel a bit overwhelming. The startup might have to spend a fortune on retail establishments that can guide users through their first Tempo experience. There’s also no mobile version yet, so you can’t bring the work outs on the road with you. 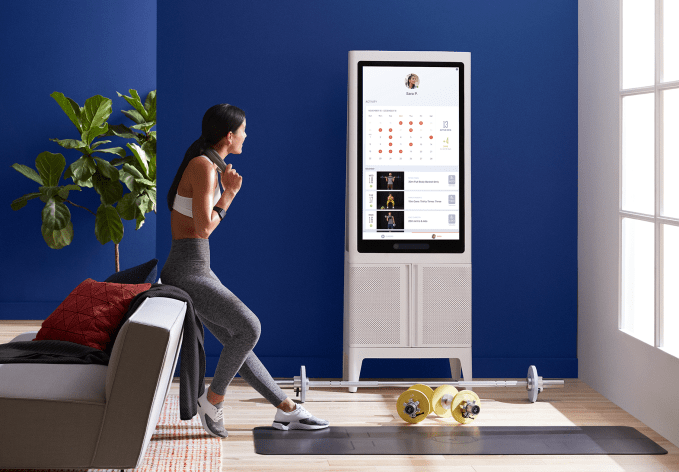 Eldeeb seems guinely motivated to keep improving the product so it’s better than commuting to work out. “Getting to the gym or class is often half the battle. By bringing the gym to you and structuring the classes to be as efficient as possible, Tempo not only makes improving your health more convenient, but it gives you back your most precious resource: time.”

For those comfortable lifting the cheap weights they have at home or hitting up a budget gym, Tempo might seem needlessly overwrought and expensive. But for anyone who needs more instruction or wants to get a Barry’s Bootcamp-worthy workout at home, Tempo might be just their speed.