A significant majority of Americans have lost faith in tech companies’ ability to prevent the misuse of their platforms to influence the 2020 presidential election, according to a new study from Pew Research Center, released today. The study found that nearly three-quarters of Americans (74%) don’t believe platforms like Facebook, Twitter and Google will be able to prevent election interference. What’s more, this sentiment is felt by both political parties evenly. 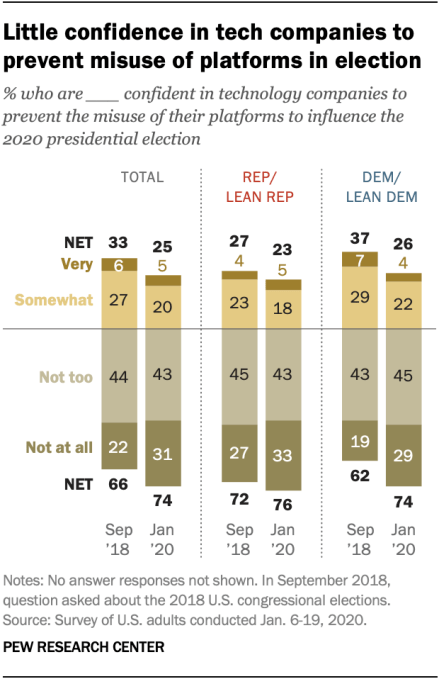 And yet, 78% of Americans believe it’s tech companies’ job to do so. Slightly more Democrats (81%) took this position, compared with Republicans (75%).

While Americans had similar negative feelings about platforms’ misuse ahead of the 2018 midterm elections, their lack of confidence has gotten even worse over the past year. As of January 2020, 74% of Americans report having little confidence in the tech companies, compared with 66% back in September 2018. For Democrats, the decline in trust is even greater, with 74% today feeling “not too” confident or “not at all” confident, compared with 62% in September 2018. Republican sentiment has declined somewhat during this same time, as well, with 72% expressing a lack of confidence in 2018, compared with 76% today. 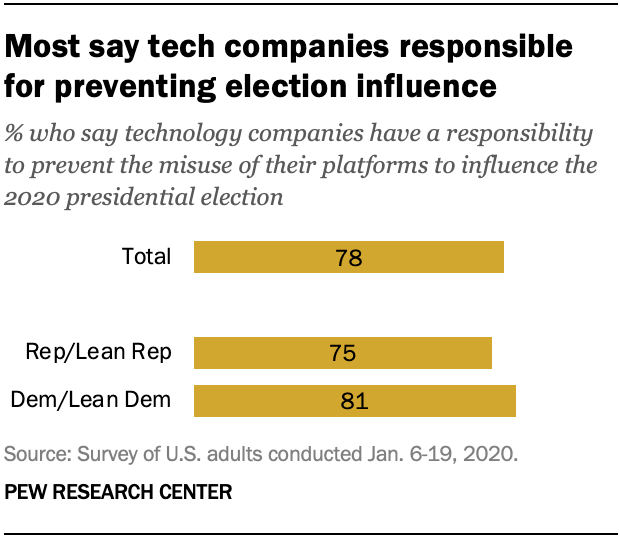 Even among those who believe the tech companies are capable of handling election interference, very few (5%) Americans feel “very” confident in their capabilities. Most of the optimists see the challenge as difficult and complex, with 20% saying they feel only “somewhat” confident.

Across age groups, both the lack of confidence in tech companies and a desire for accountability increase with age. For example, 31% of those 18 to 29 feel at least somewhat confident in tech companies’ abilities, versus just 20% of those 65 and older. Similarly, 74% of youngest adults believe the companies should be responsible for platform misuse, compared with 88% of the 65-and-up crowd. 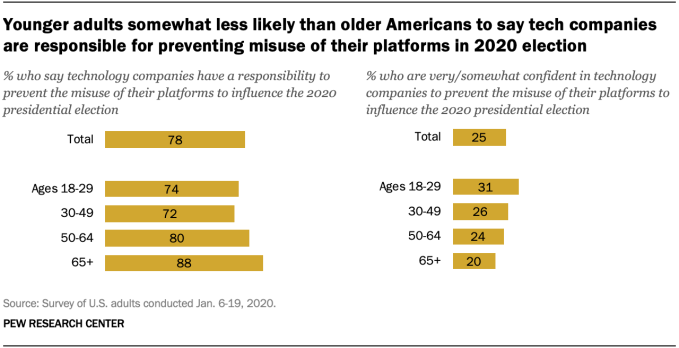 Given the increased negativity felt across the board on both sides of the aisle, it would have been interesting to see Pew update its 2018 survey that looked at other areas of concern Republicans and Democrats had with tech platforms. The older study found that Republicans were more likely to feel social media platforms favored liberal views while Democrats were more heavily in favor of regulation and restricting false information.

Issues around election interference aren’t just limited to the U.S., of course. But news of Russia’s meddling in U.S. politics in particular — which involved every major social media platform — has helped to shape Americans’ poor opinion of tech companies and their ability to prevent misuse. The problem continues today, as Russia is being called out again for trying to intervene in the 2020 elections, according to several reports. At present, Russia’s focus is on aiding Sen. Bernie Sanders’ campaign in order to interfere with the Democratic primary, the reports said.

Meanwhile, many of the same vulnerabilities that Russia exploited during the 2016 elections remain, including the platforms’ ability to quickly spread fake news, for example. Russia is also working around blocks the tech companies have erected in an attempt to keep Russian meddling at bay. One report from The NYT said Russian hackers and trolls were now better at covering their tracks and were even paying Americans to set up Facebook pages to get around Facebook’s ban on foreigners buying political ads.

Pew’s report doesn’t get into any details as to why Americans have lost so much trust in tech companies since the last election, but it’s likely more than just the fallout from election interference alone. Five years ago, tech companies were viewed largely as having a positive impact on the U.S., Pew had once reported. But Americans no longer feel as they did, and now only around half of U.S. adults believe the companies are having a positive impact.

More Americans are becoming aware of how easily these massive platforms can be exploited and how serious the ramifications of those exploits have become across a number of areas, including personal privacy. It’s not surprising, then, that user sentiment around how well tech companies are capable of preventing election interference has declined, too, along with all the rest.