Pan-African e-commerce company Jumia got into the black (by a small amount) on its gross profit vs. fulfillment expenses, expanded financial services and still posted losses.

The online sales company, with an operations center in China, also anticipates some negative impact on 2020 growth from the coronavirus outbreak, CEO Sacha Poigonnec said.

These were highlights today for Jumia’s fourth-quarter and full-year results — 10 months after the company became the first vc-backed startup in Africa to go public on a major exchange.

Jumia — with online goods and services verticals in 11 countries — posted 2019 revenues of €160 million, representing growth of 24% over 2018. The company increased its annual active customer base in the fourth-quarter by 54%, to 6.1 million, from 4.0 million for the same period last year.

Jumia’s 2019 Gross Merchandise Value (GMV) — the total amount of goods sold over the period — contracted by 3% to €301 million in the fourth-quarter.

Poignonnec attributed the decline to “business mix re-balancing”, which entailed reducing expenditures on promotions. The company also saw a contraction in sales of phones and electronics, which impacted GMV. 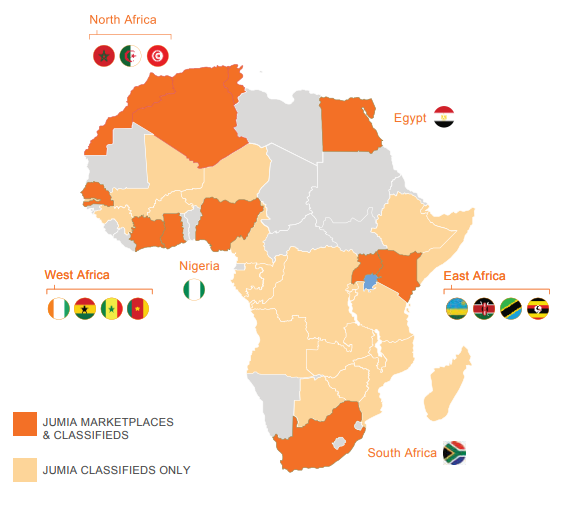 Perhaps the brightest spot in Jumia’s 2019 performance was the company’s ability to reach a gross profit of €1.0 million after deducting fulfillment expenses in Q4.

That obviously doesn’t get them to profitability over all the company’s other expenses, but fulfillment costs have been historically high for Jumia as an online-retailer in Africa.

The overall pattern of growing revenues and customers YoY has been consistent for Jumia.

CEO Sacha Poignonnec pointed to Jumia’s ability in Q4 to reach positive gross-profit over fulfillment expenses — one of the company’s largest costs — as a sign it could eventually get into the black overall.

Jumia exited several countries in 2019 — suspending e-commerce operations in Tanzania, Cameroon, and Rwanda. “We believe those countries have…potential in the long-term but decided to allocate our resources to the countries that best support our long-term growth and path to profitability,” said Poignonnec.

Jumia also saw lift in its JumiaPay digital finance product — and notably — is developing new financial services (including for SMEs) aided by its big financial investors, Mastercard and Axa.

Jumia launched an Axa money market fund product in Nigeria in 2019 and some promotional programs on Mastercard’s network, as noted in page 10 of its investor presentation. 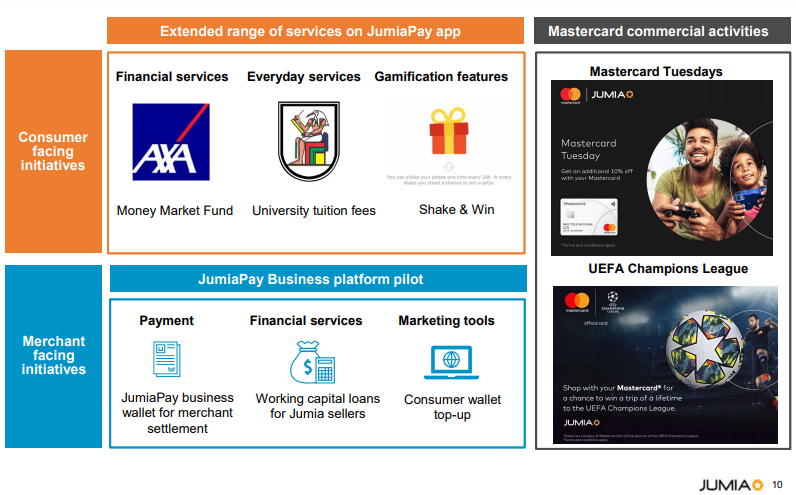 Total payment volume on JumiaPay increased 57% year-over-year to €45.6 million in 2019 and JumiaPay was used for 29% of Jumia e-commerce orders.

This is significant, as the company has committed to generate more revenues from higher margin digital payment products and offer JumiaPay as a standalone service across Africa.

Since its founding in 2012, Jumia has been forced to adapt to slower digital payments integration in its core market Nigeria and allow cash-on-delivery payments, which are costly and more problematic than digital processing.

Poignonnec also acknowledged the company’s 2020 revenues could be negatively impacted by the coronavirus. “The recent…outbreak in China is likely to affect growth over the coming quarters, and here we are starting to face some challenges to fulfill our cross-border sales,” he said.

Surprisingly absent from Jumia’s earnings call (and the subsequent Q&A) was discussion of the company’s share price, which spiked then plummeted after its April 2019 NYSE listing.

The online retailer gained investor confidence out of the gate, more than doubling its $14.50 opening share price post IPO.

That lasted until May, when Jumia’s stock came under attack from short-seller Andrew Left, whose firm Citron Research issued a report accusing the company of fraud — which sent the company’s share price plummeting — from $49 to $26. 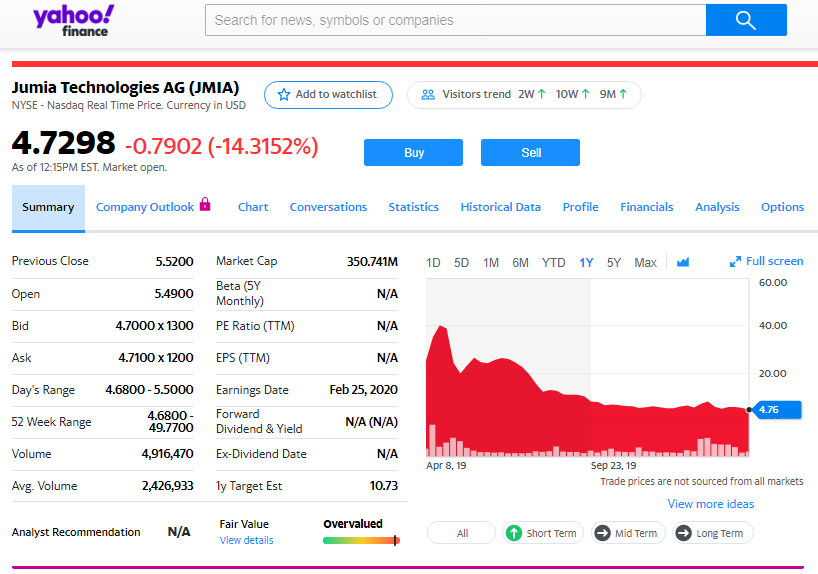 Then on its second-quarter earnings call in August, Jumia offered greater detail on the fraud perpetrated by some employees and agents of its JForce sales program.

The company declared the matter closed, but Jumia’s stock price plummeted more after the August earnings call (and sales-fraud disclosure), and has lingered in single-digit value for several months.

That’s 50% below the company’s IPO opening in April and 80% below its high.

For the remainder of 2020, bringing back growth in GMV and building on positive metrics, such as attaining gross profit after fulfillment expenses, could revive investor confidence in Jumia and its share price.

It could also put the company in a better position to match competition — such as the Marketplace Africa e-commerce platform of MallforAfrica and DHL — and possible expansion in Africa of China’s Alibaba.