Inspired by the work of Instacart shoppers over the last few years, a handful of workers at Target-owned Shipt, a grocery delivery service, are beginning to organize. With the help of two key Instacart shopper-activists, Vanessa Bain and Sarah Clarke, who goes by a pseudonym, Shipt workers are now demanding better wages and the elimination of what some describe as a culture of fear.

“We want to be the first responders,” Clarke tells TechCrunch. “Whenever gig workers find out there is a pay cut or some type of issue, they’ll feel comfortable coming to us.”

In January, Shipt started testing a new pay structure where, instead of basing it on cart size, Shipt takes into account the time it takes to complete and deliver an order. Shipt implemented these changes in Kalamazoo, Mich., San Antonio and Philadelphia. As Gizmodo reported earlier this month, there was some shopper backlash.

Prior to the changes, shoppers had received a $5 flat rate and 7.5% of the total store receipt, one shopper, who asked to remain anonymous, told TechCrunch.

“We are losing money as shoppers at a ridiculous rate,” a shopper from Kalamazoo tells TechCrunch. “A very good, close friend of mine told me in the three weeks since the new structure was implemented, she has lost the equivalent of a car payment. It is a lot of money. Our best guestimation is, we’re all losing about 30% or more. I did four orders this past weekend and I lost money on every single one.” 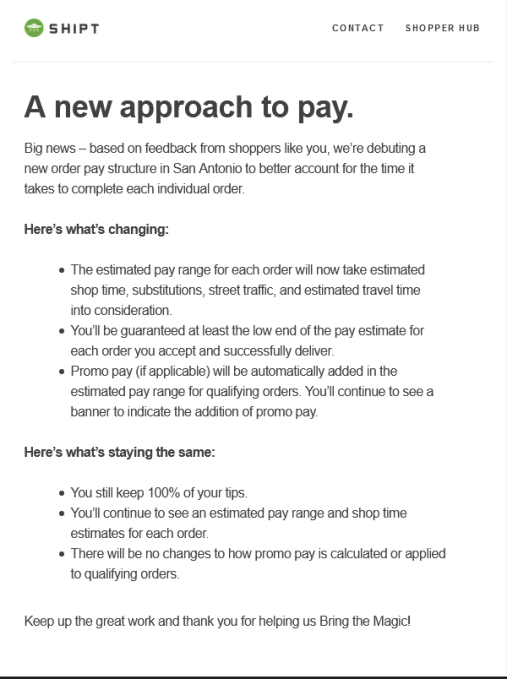 But Shipt says its goal is to maximize the earning potential for its shoppers and to make sure they get the most value for their time spent. That’s why Shipt is testing this new pay structure in certain markets to better account for time spent shopping and delivering orders, Shipt Director of Corporate Communications and Outreach Julie Coop told TechCrunch.

“In this structure, shoppers are guaranteed to make at least the minimum in the pay range shown at the time the order is offered to them,” Coop said. “That range is based on the estimated amount of time the order will take to complete. We’ve seen pay levels remain consistent overall, and in some markets slightly higher. As always, Shipt Shoppers receive 100% of their tips on top of order pay.”

Shipt connected me with Stacy Smith, who shops for Shipt in Kalamazoo, Mich. Smith tells TechCrunch she has no issue with the new policy, saying that she’s actually seen a slight increase in her pay. While it was more attractive and economical for her to get bigger orders in the old pay model, the size of the order now doesn’t matter.

At this point, it’s not clear how many of Shipt’s workers are for or against this new pay structure. Still, a number of workers reached out to Clarke and Bain once the pay structure started rolling out.

“Shipt has been pretty under the radar,” Clarke said. “No one is really paying attention to them — mostly because the workers are scared to speak out.”

Willy Solis, who shops for Shipt in the Dallas area, is one of the shoppers who reached out to Clarke.

“I’ve followed Sarah and Vanessa’s work and their efforts over on Instacart, because I’m on that platform as well,” Solis tells TechCrunch. “I’ve been seeing what they’ve been able to accomplish, so when Sarah asked in our group lounge if anyone is interested in talking, I jumped at it.”

Solis says he had been thinking about organizing for some time, but there had been no catalyst for him and other workers to do something. Now, Solis is working with Clarke and Bain through their Gig Workers Collective to figure out their strategy moving forward.

“While I am afraid of being deactivated due to speaking out, I am hopeful Shipt will hear the Shipt shopper community’s voice as a collective whole, rather than censoring and ignoring dissenting concerns,” he says.

There are two main Facebook groups where Shipt shoppers interact. One is Shipt Shoppers United, which one shopper from Iowa, who asked to remain anonymous, describes as being “a little more real.” The group strictly prohibits people from Shipt’s corporate team, but it’s much smaller in size. This group has just a little over 6,000 members.

The other group is the Shipt Shopper Lounge, which is administered by members from Shipt HQ. This group has more than 100,000 members. It’s in this group where Solis says Shipt has created a “cult-like environment” where the company deletes any negative comments in Facebook groups for shoppers and only lets shoppers see “feel-good stories in an attempt to keep up shopper moral.”

Solis said his comments have been deleted from the Shipt Shopper Lounge Facebook group and his local Shipt group. This culture of fear, Solis says, leaves some shoppers feeling like they have to take every order, or else they’ll be punished in some way, like getting sent low-paying orders or getting deactivated. Or, if they speak out against the company in Facebook groups, some say they fear they’ll be deactivated.

“Shopper feedback has been incredibly important to improving the experience we create for our shopper community, members and retail partners,” Coop said. “We encourage Shipt Shoppers to share their opinions and feedback about their journey with Shipt, and we offer multiple feedback channels where shoppers are encouraged to speak freely to Shipt about their shopper experience.”

But the Iowa-based shopper, for example, referred to the vibe of the group as brainwashing.

“It’s almost like it tries to brainwash you into thinking the company can’t do anything wrong,” the shopper from Iowa says. “They won’t let you post negative things about it. If you do there’s a good chance you’ll be deactivated.”

This Iowa shopper says she saw someone question the pay model Shipt is testing, only for that comment to be deleted. Shipt, however, says it only deactivates people based on things like performance issues.

“Shipt does not make deactivation decisions based on shopper feedback that may be critical of Shipt, but is respectful and falls within our guidelines of appropriate actions,” Coop said in a statement to TechCrunch. “We do have written agreements with all shoppers that outline possible causes for deactivation including consistent performance issues resulting in a poor customer experience or unlawful behavior.”

While the culture and pay practices at Shipt are concerning to Solis, he says what really gets at him is the amount of control he says Shipt tries to exert over him.

Shipt, for example, requires shoppers to take certain training classes, such as Late Delivery refresher, which is sent to shoppers who have been late 10% of the time on their last 50 orders. If shoppers don’t get a perfect score, they risk being disabled from the platform. Here’s what the course, which Shipt has designed to take about 15 to 20 minutes, looks like.

Smith, on the other hand, says she feels like she can truly be independent on Shipt. Smith pointed to how she can make her own schedule determine which orders she wants to take.

“I know people look into things quite a bit and come up with theories,” Smith says. “But at the end of the day, there’s no way to say Shipt is trying to control this, that and the other. I’ve never felt controlled by them at all.”

Shipt is the latest company in the gig economy to find itself at odds with its workers. Last year marked a turning point among gig workers who deliver for Instacart and DoorDash, as well as people who drive for Uber and Lyft. Between the passage of gig worker protections bill AB 5 and workers at Spin unionizing, gone are the days where workers for these big tech companies can be silenced.

“We do have some headwinds in organizing,” Solis says. “The company is active in our groups. We have a lot of resistance from that standpoint so we need different strategies to let people know they can be anonymous and speak out and be heard.”

The year of the gig worker uprising