Tier, the European e-scooter rentals startup that operates in 55 cities across 11 countries, has topped up its funding for the second time in four months.

The Berlin-based company has extended its Series B round to over $100 million, up from $60 million disclosed in October. The additional capital is a mix of equity and debt financing provided by Moscow’s RTP Global, London’s Novator and an unnamed U.S. debt fund. Part one of the Series B was co-led by Mubadala Capital and Goodwater Capital.

Tier says the additional funds will be invested in R&D in order to create further efficiency and for vehicle development. The so-called “micromobility” startup will also continue to strengthen its management team — the company recently recruited a new CCO and COO — and pursue M&A activities.

In addition, Tier says it will expand its vehicle fleet — perhaps with new micromobility product categories — in order to bring “sustainable mobility to more people and more cities across Europe.”

Meanwhile, in January, Tier quietly acquired U.K. startup Pushme Bikes, a manufacturer of replaceable batteries and other mobility-related hardware. The company was thought to be developing a network of battery change stations for “last-mile” transport, which would seem to tie directly into Tier’s recent move to upgrade its scooter fleet with new scooters that use swappable batteries.

In a brief WhatsApp call with Tier co-founder and CEO Lawrence Leuschner, he framed the purchase of Pushme Bikes as an “acqui-hire” based on the team’s design and development expertise, which he said will give Tier a needed boost in its future hardware plans.

He also said that Tier’s move to swappable battery-based e-scooters has already seen 80% of its fleet replaced with scooters using swappable battery technology, which in turn is helping drive much better unit economics. That’s because the scooters no longer need to be taken off the streets and driven by van to a central location for charging and maintenance, only to be driven back several hours later. Instead, on-location maintenance where possible is carried out and dead batteries are simply swapped out and taken by cargo e-bike (pictured) to a central charging warehouse or, in some instances, a nearby charging “hub.” 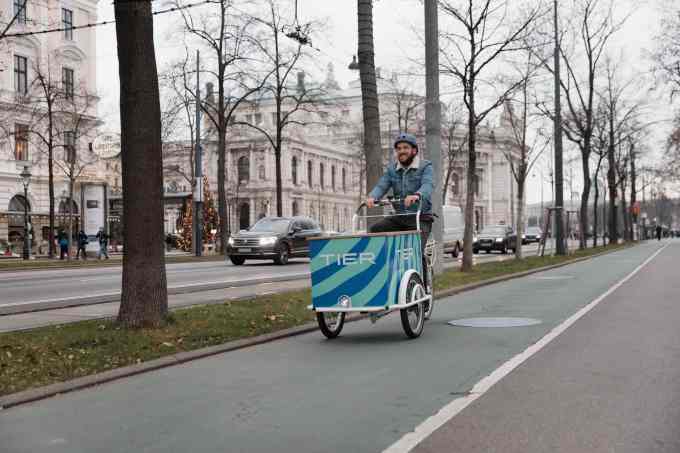 Noteworthy, unlike the majority of e-scooter rental companies, Tier shunned gig economy workers for charging from the get-go, preferring to use a centralised system in order to maintain quality of service. “The gig economy is dead [in relation to e-scooter rentals],” Leuschner says emphatically, noting that swappable battery tech means a centralised system makes even greater sense.

And in case you’re wondering what Tier did with its old e-scooters after replacing most of its fleet with newer hardware, Leuschner explained that the Okai-manufactured devices are being re-sold directly to German consumers for private use via MyTier app. Perhaps that’s unsurprising, given that the Tier CEO previously founded reBuy, a European market leader in used electronics.

Cue statement from Anton Inshutin, partner at RTP Global: “We were impressed by the team’s meticulous focus on capital efficiency and enhancing operational excellence. They have managed to deliver class-leading unit economics, enabling them to expand profitably in the winter. We are very much looking forward to partnering with this impressive team that is unrivalled in its execution as the company continues to scale.”