The coronavirus outbreak could result in at least a 3.3% drop — and as high as a 9% dip — in the volume of PCs that will ship globally this year, research firm Canalys reported Thursday evening in its revised projections to clients.

The worst case makes a deeper dent, stating that about 362 million units will ship this year, down 8.5% from last year.

“In the best-case scenario, production levels are expected to revert to full capacity by April 2020, hence the biggest hit will be to sell-in shipments in the first two quarters, with the market recovering in Q3 and Q4,” the firm said. 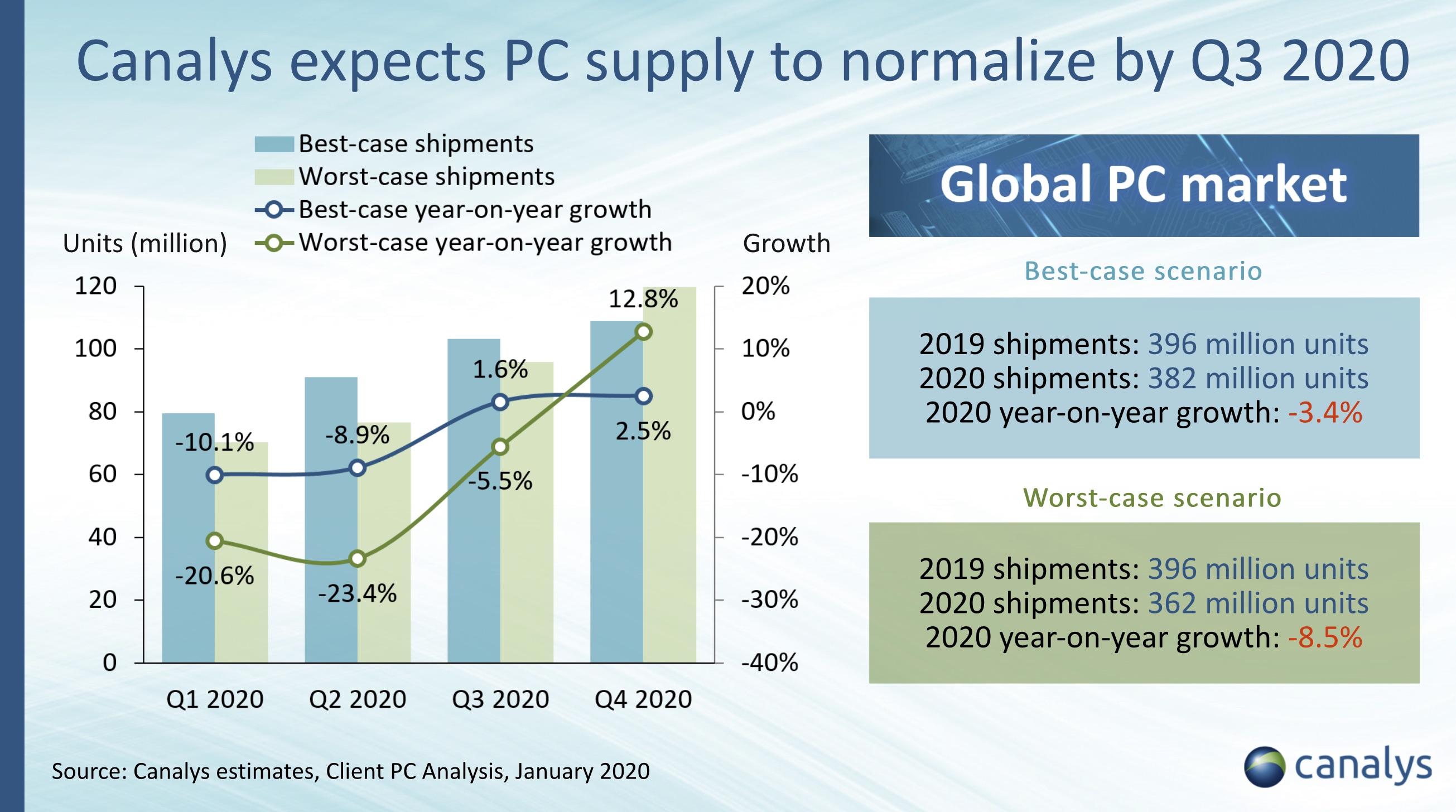 The worst-case scenario assumes that production levels will not return to their full capacity by June 2020. “Under the assumptions of this scenario, production and demand levels in China will take even longer to recover and Q2 will suffer a decline on a par with Q1 as a consequence. It will be as late as Q4 2020 until we see a market recovery.”

In either of the scenarios, China, one of the world’s largest PC markets, will be most impacted. In worst-case scenarios, “the Chinese market will suffer heavily in 2020 under this scenario, with a 12% year-on-year decline over 2019, and subsequent stabilization taking even longer, with 2021 forecast shipments lagging 6 million behind the best-case scenario. The expected CAGR between 2021 and 2024 in China is 6.3%,” Canalys stated.

China, the global hub for production and supply chain, moved to contain the impact of coronavirus by first extending the official Lunar New Year holidays, which was followed by stringent travel restrictions to keep citizens safe. “This resulted in a significant drop in offline retail traffic and a dramatic fall in consumer purchases,” Canalys analysts said.

The outbreak has also resulted in supply shortages of components, such as PCBs and memory in China and other markets. “Likewise, channel partners have received notifications from key PC vendors over the last two weeks that their PC shipments and replacement parts can be expected to arrive in up to 14 weeks – over three times the usual delivery time – depending on where partners are located,” the firm said.

“Technology vendors and channel partners in the Asia Pacific region face the unexpected challenge of coping with the sudden outbreak of COVID-19 (coronavirus). The crisis was largely unforeseen, even in mid-January. Most leaders this year were anticipating disruption from political instability and natural disasters, not an epidemic,” wrote Sharon Hiu, an analyst at Canalys in a separate report.

Foxconn, a key manufacturer for Apple, said on Thursday that its 2020 revenue will be impacted by Wuhan coronavirus. The firm said its factories in India, Vietnam and Mexico are fully loaded and it is planning to expand overseas.

Earlier this month, Apple said it does not expect to meet revenue guidance for March quarter due to constrained iPhone supply and low demand due to the store closures in China.

The U.S. giant is expected to miss its schedule for mass producing a widely rumored affordable iPhone, while inventories for existing models could remain low until April or longer, Nikkei Asian Review reported on Wednesday.