Twitch, the Amazon-owned streaming service for gamers, is poised to surpass 40 million monthly active viewers in the U.S. as of next year, according to a new forecast from eMarketer out on Thursday. By 2023, it will reach 47 million viewers. Currently, the analyst firm estimates Twitch has 37.5 million viewers in the U.S. who tune in to watch at least once per month.

Officially, Twitch reports it has more than 3 million active monthly creators and over 15 million average daily streamers, per its own website. But it focuses on metrics like minutes watched and concurrent viewers to paint a picture of its size and growth.

While Twitch continues to gain new viewers in the U.S., the new forecast indicates Twitch’s growth is slowing due to increased competition from YouTube, Microsoft’s Mixer and Facebook Gaming. This backs up findings from a separate report released last month, which found that Twitch’s loss of top streaming talent began to impact hours watched and streamed on its site in Q4 2019.

While none of the defections knocked out Twitch from its No. 1 position, it is starting to slow down its growth across a number of key metrics.

The defections continued in Q1 2020, with Ronda Rousey moving exclusively to Facebook Gaming earlier this month.

Despite these losses, eMarketer says Twitch will still see double-digit growth in the U.S. this year, up 14.3% from 2019. However, that’s down from 23.5% growth last year. And in the following years, growth will continue to slow, dropping to 6.3% by 2023. 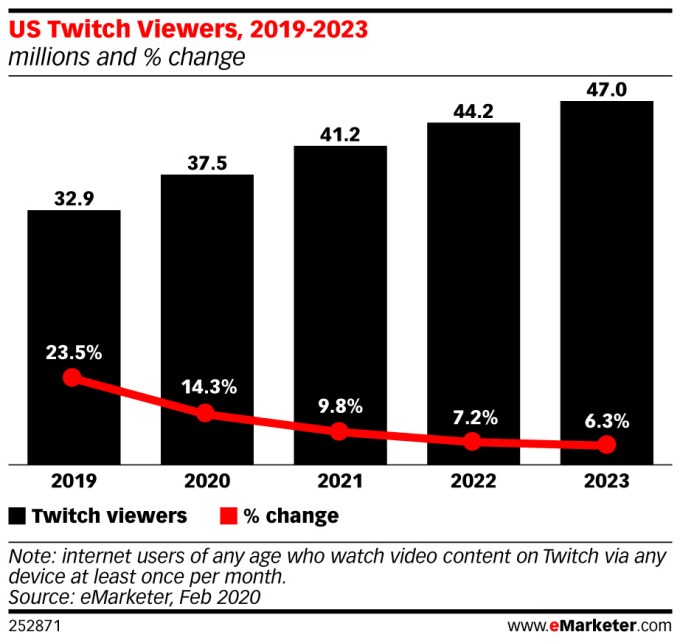 The report stresses that Twitch needs to find ways to retain its gaming talent going forward, instead of losing them to better deals offered by rivals. It will also likely continue to invest in its expansion beyond gaming, as non-gaming traffic drove significant viewership in 2019. Twitch’s “Just Chatting” category, for instance, was watched more than any game on the site in December and was No. 2 in January, according to StreamElements.

This is the first time the analyst firm has estimated the number of people watching Twitch on a regular basis — a decision it likely made because of how large Twitch has become.

“Twitch,” said Vahle, “…is now too big for the internet giants to ignore. The big platforms, owned by the likes of Facebook, Google, and Microsoft, are competing to sign big deals with popular streamers and esports leagues. Twitch will have to find ways to encourage streamers — and viewers and advertisers — to stay on its platform now that other attractive options exist,” he added.

Another possible way for Twitch to boost viewership — and one not mentioned in eMarketer’s report — is to lean on its ties to parent company Amazon.

“Last year was actually our biggest year ever in terms of growth of Twitch on Fire TV,” Amazon’s Fire TV head Marc Whitten told TechCrunch in January, when talking about Fire TV’s 2020 plans.

Amazon is now thinking about how to better integrate Twitch and Fire TV — especially since Fire TV supports the integration of live content right on its homepage, and Twitch is a live-streaming service. With Fire TV’s now over 40 million monthly users, Amazon could easily send more viewers to Twitch if it just turned the dials a little.