Quibi, the mobile-only streaming service from Jeffrey Katzenberg, is now open for pre-orders. The company declined to fully show off its app only a month ago during demos of its “TurnStyle” technology at the Consumer Electronics Show in Las Vegas, but it appears the app is ready nonetheless. Quibi is listed on both Apple’s App Store and Google Play, where it’s been given a pre-order date of April 6, 2020 — the date Quibi’s new service goes live.

The app was actually published to the app stores in January, according to data from Sensor Tower and App Annie. Quibi confirmed the app actually opened up for pre-orders on January 30, but this hadn’t been reported yet by media. (Chrissy Teigen tweeted it, however.) 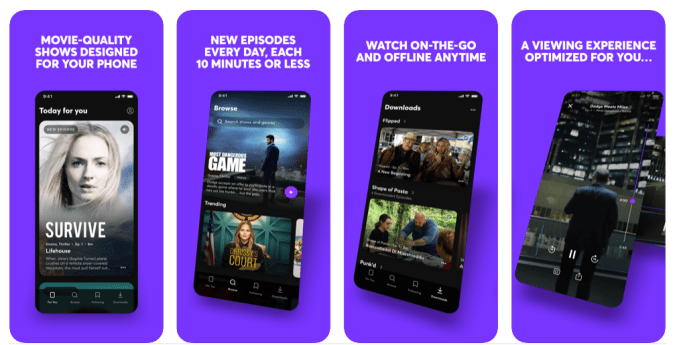 Apple first introduced pre-order functionality for apps and games in late 2017, allowing interested consumers to have a new app or game automatically download to their device on launch day. And in the case of paid apps, customers aren’t charged until the app becomes available.

Since launch, the pre-order system has largely been used with mobile games. Apple even devotes part of its iOS App Store to a “Coming Soon” section where you can find upcoming games for pre-order.

It’s far less common for non-games to utilize a pre-order system. By doing so, it’s a signal that the company plans to do a significant marketing push ahead of the app’s release, likely in hopes of achieving a higher number of day-one downloads than it would otherwise.

That’s important in Quibi’s case, given the competition that awaits it. Disney+, for example, blew past expectations to reach nearly 29 million subscribers in less than 3 months after its U.S. debut. Quibi, meanwhile, will arrive in the spring, just ahead of when WarnerMedia’s HBO Max and NBCU’s Peacock also begin rolling out. Quibi can’t wait until the market is even more crowded to start pushing users to download its app — it needs to capture users’ attention now. 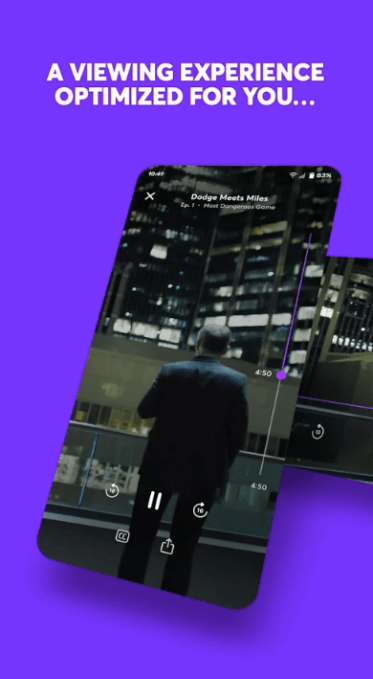 With Quibi’s app store listings now live, we also have our first glimpse of the streaming service’s user interface.

Much has been made about Quibi’s potential to reimagine TV by taking advantage of mobile technology in new ways, but the app itself looks much like any other streaming service, save for its last app store screenshot showing off its TurnStyle technology.

The app appears to favor a dark theme common to streaming apps, like Netflix and Prime Video, with just four main navigation buttons at the bottom.

The first is a personalized For You page, where you’re presented a feed where you’ll discover new things Quibi thinks you’ll like.

A Search tab will point you toward trending shows and it will allow you to search by show titles, genre or even mood.

The Following tab helps you keep track of your favorite shows and a Downloads tab keeps track of those you’ve made available for offline viewing.

Otherwise, Quibi’s interface is fairly simple. Shows are displayed with big images that you flip through either vertically on your home feed or both horizontally and vertically as you move through the Browse section.

The company does promote its TurnStyle viewing technology in its app store description, though it doesn’t reference the technology by name. Instead, it describes it as a viewing experience that puts you in full control. “No matter how you hold your phone, everything is framed to fit your screen,” it says.

In vertical viewing mode, it also introduces controls that appear on either the left or right side the screen — you choose, based on whether you’re left or right-handed.

Quibi did not formally announce the app was open for pre-order.

The startup, founded by Jeffrey Katzenberg, is backed by more than a billion dollars — including a recently closed $400 million round.

Katzenberg explained at CES that every great innovation in Hollywood has been driven by new technology, but today’s streaming services haven’t fully capitalized on the way many people consume content — meaning, on their phone. Quibi plans to make its service mobile-first, with TurnStyle for better viewing. And later, by using the phone’s other sensors and features to create different types of stories, like a horror show you can only watch at night or interactive fitness programs that can track your steps, among other things.

But Quibi could easily come across as gimmicky if it doesn’t get the experience right with quality content, too. Even if Quibi doesn’t pan out as a standalone streamer, it could license its TurnStyle tech to others in the streaming space — that would make Quibi one of the most expensive demo apps of all time.

Updated 2/20/20, 6 PM ET to clarify the app was opened to pre-orders on Jan 30, according to Quibi, but it wasn’t publicly announced. Sensor Tower had earlier said the app was only made available for pre-order today. The app was updated today, however.