LinkedIn has cornered the market when it comes to putting your own professional profile online and using it to network for jobs, industry connections and professional development.

But when it comes to looking at a chart of the people, and specifically the leadership teams, who make up organizations more holistically, the Microsoft-owned network comes up a little short: you can search by company names, but chances are that you get a list of people based on their connectivity to you, and otherwise in no particular order (including people who may no longer even be at the company). And pointedly, there is little in the way of verification to prove that someone who claims to be working for a company really is.

Now, a startup called The Org is hoping to take on LinkedIn and address that gap with an ambitious idea: to build a database (currently free to use) of organizational charts for every leading company, and potentially any company in the world, and then add features after that, such as job advertising — for example organizations looking to hire people where there are obvious gaps in their org charts.

With 16,000 companies profiled so far on its platform, a total of 50,000 companies in its database and around 100,000 visitors per month, The Org is announcing $11 million in funding: a Series A of $8.5 million, and a previously unannounced seed round of $2.5 million.

Led by Founders Fund, the Series A also includes participation from Sequoia and Balderton, along with a number of angels.

Sequoia is actually a repeat investor: it also led The Org’s $2.5 million seed round, which also had Founders Fund, Kevin Hartz, Elad Gil, Ryan Petersen, and SV Angel in it. Keith Rabois, who is now a partner at Founders Fund but once held the role of VP of business and corporate development at LinkedIn, is also joining the startup’s board of directors. 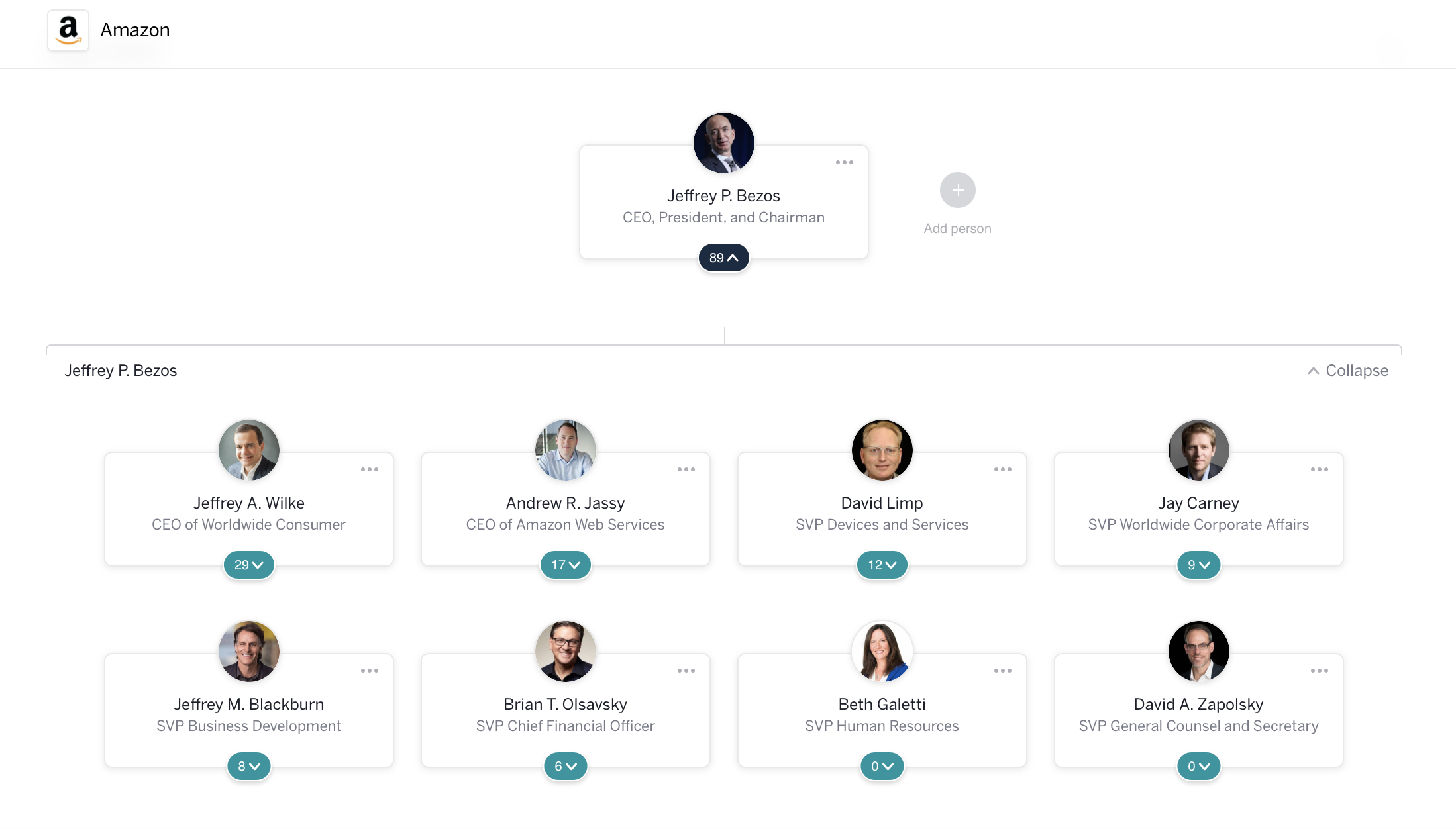 Co-headquartered in New York and Copenhagen, Denmark, The Org was co-founded by Christian Wylonis (CEO) and Andreas Jarbøl, partly inspired by a piece in online tech publication The Information, which provided an org chart for the top people at Airbnb (currently numbering 90 entries).

“This article went crazy viral,” Wylonis said in an interview. “I would understand why someone would be interested in this outside of Airbnb, but it turned out that people inside the company were fascinated by it, too. I started to think, when you take something like an org chart and make it publicly facing, I think it just becomes interesting.”

So The Org set out to build a bigger business based on the concept.

For now, The Org is aimed at two distinct markets: those outside the company who might most typically be interested in who is working where and doing what and reporting to whom — for example, recruiters, those in human resources departments who are using the data to model their own organizational charts, or salespeople; and those inside the company (or again, outside) who are simply interested in seeing who does what.

The Org is aiming to have 100,000 org charts on its platform by the end of the year, with the longer-term goal being to cover 1 million. For now, the focus is on adding companies in the US before expanding to other markets.

But while the idea of building org charts for many companies sounds easy enough, there is also a reason why it hasn’t been done yet: it’s not nearly as simple as it looks. That is one reason why even trying to surmount this issue is of interest to top VCs — particularly those who have worked in startups and fast-growing tech companies themselves.

“Today, information about teams is unstructured, scattered, and unverified, making it hard for employees and recruiters to understand organizational structures,” said Roelof Botha, partner at Sequoia Capital, in a statement.

“Organizational charts were the secret weapon to forging partnerships during my 20 years as an entrepreneur in Silicon Valley and Europe. Yet, they are a carefully guarded secret, which have to be painstakingly put together by hand,” said Lars Fjeldsoe-Nielsen, general partner at Balderton Capital, in a statement. “The Org is surfacing this critical information, improving efficiency from the sales floor to the boardroom.”

“Up-to-date org charts can be useful for everything from recruiting to sales, but they are difficult and time consuming to piece together,” added Rabois in a statement. “The Org is making this valuable information easily accessible in a way we were never able to do at LinkedIn.”

The approach that The Org is taking to building these profiles so far has been a collaborative one. While The Org itself might establish some company names and seed and update them with information from publicly available sources, that approach leaves a lot of gaps.

This is where a crowdsourced, wiki-style approach comes in. As with other company-based networking services such as Slack, users from a particular company can use their work email addresses to sign into that organization’s profile, and from there they can add or modify entries as you might enter data in a wiki — the idea being that multiple people getting involved in the edits will help keep the company’s org chart more accurate.

While The Org’s idea holds a lot of promise and seems to fill a hole that other platforms like LinkedIn — or, from another direction, Glassdoor — do not address in their own profiling of companies, I can see some challenges, too, that it might encounter as it grows.

Platforms that provide insights into a company landscape, such as LinkedIn or Glassdoor, are ultimately banked more around individuals and their own representations. That means that by their nature these platforms may not ever provide complete pictures of businesses themselves, just slices of it.

The Org, on the other hand, starts from the point of view of presenting the company itself, which means that the resulting gaps that arise might be more apparent if they never get filled in, making The Org potentially less useful as a tool. (Consider for example either making sure the data is up to date, or whether you have a complete or or partial picture of an engineering, marketing or operations team based solely on who has made the effort to update or disclose information).

Similarly, if these charts really are often closely guarded by companies (something I don’t doubt is true, since they could pose poaching risks, or copycats in the form of companies attempting to build org structures based on what their more successful competitors are doing), I could see how some companies might start to approach The Org with requests to remove their profiles and corresponding charts.

Wylonis said that “99%” of companies so far have been okay with what The Org is building.

“The way that we see it is that transparency is of interest to the people who work there,” he said. “I think that everyone should strive for that. Why block it? The world is changing, and if the only way to keep your talent is by hiding your org chart you have other problems at your company.”

He added that so far The Org has not had any official requests, “but we have had informal enquiries about how we get our information. And some companies email us about changes. And when an individual person gets in touch and says, ‘I don’t want to be here,’ we delete that. But it’s only happened a handful of times.” It’s not clear whether that proportion stays the same, or goes up or down, as The Org grows.

In the meantime, the other big question that The Org will grapple with is just how granular should it go?

“I hope that one day we can have an updated and complete org chart for every business, but that might prove difficult,” Wylonis said. Indeed, that could mean mapping out 1 million people at Walmart, for example. “For the biggest companies, it may be that it works to map out the top 500, with the top 30-40 for smaller companies. And people can always go in and make corrections to expand those if they want.”

Interestingly, the org chart appears to be having something of a startup moment. Just hours after I published this, another called ChartHop announced funding. ChartHop is the other side of the coin from The Org: it’s addressing the same challenge of needing a better way to track and view org charts, but it taps lots of internal resources at the company in question, and is not built with the intention of sharing externally.