A number of startups are taking on big banks with new apps that offer modern, mobile banking experiences, innovative features and reduced or even zero fees. Entering this now-crowded market is Level, a challenger bank and banking app with advantages like 1% cash back on debit card purchases, 2.1% APY on deposits, early access to paychecks and no fees.

The banking service is the latest from the same team behind the “debit-style” credit card called Zero, aimed at millennials who want the benefits of credit without the potential for overspending. As Zero, the company last year closed on $20 million in Series A funding from New Enterprise Associates (NEA), SignalFire, Eniac Ventures and Nyca, bringing its total raise to date $35 million. It now has tens of thousands of users.

Similar to Zero, Level also targets a younger demographic — in this case, those who no longer see the need for physical banks, when a bank account, useful app and debit card is all they need. Today, there are several of these sorts of banking services to choose from; in the U.S., for example, there’s Simple, Ally, Chime, Varo, N26, Current, Space, Step, Stash, Empower and others.

Level takes on these rival challenger banks, too, by offering a higher 2.10% APY on its FDIC-insured deposits, without requiring a minimum balance. The company notes that’s 35x the national average, based on U.S. bank balances with a less than $100,000 balance. 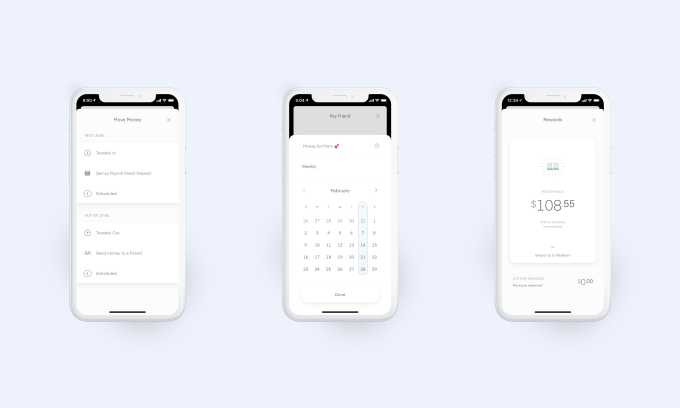 It also snags a feature popular with credit card users, by offering 1.0% unlimited cash bank on debit card spending. This cashback applies to both signature-based and online purchases, and is paid out on accounts that have at least a $1,000 monthly direct deposit. To be clear, a signature-based purchase means you select “credit” instead of “debit” when paying at point-of-sale. This determines how the merchant processes the transaction and the fees it pays. In Level’s case, it’s sharing some of those fees back with customers as the “cash back” option.

Level could benefit from consumers believing that running a card as credit takes an extra step. In some cases, customers may skip this when they’re in a hurry and run the card as a debit instead — allowing Level to keep the fees for itself.

Like many challenger banks, Level offers early access to your paycheck. For customers with a direct deposit, Level will make the funds available based on when they are received, which could be up to two days early.

Also like most other banking startups, Level ditches the numerous fees big banks charge. There are no monthly, overdraft, foreign transaction or add-on ATM fees, says Level, and no minimum balance is required to have an account. It will even reimburse ATM fees worldwide up to three times per month, at up to $4 per reimbursement to take the sting out of the increasingly costly fees to access your cash.

Level additionally includes features that have now become part of the baseline experience for challenger banking apps, like being able to see transactions on a map, lock a missing debit card from the app and receive push notifications for purchases, refunds and transfers.

The app itself has a clean, modern almost minimalist design, making it simple to understand and navigate. However, it sadly opted for that terrible design trend of using an overly lightened gray font on a white background. This could put off older customers, as it makes the screen harder to read.

However, where it’s lacking is in the more robust bill, expense and goal planning features offered by other banking apps like Simple, Empower or N26, for example, which help users better plan for both recurring expenses as well as long-term goals.

However, like most (but not all) of the digital banks operating today in the U.S., Level itself is not a bank. Its customers’ funds are actually held in FDIC-insured accounts (up to $250,000) through Evolve Bank & Trust. Level, meanwhile, provides the technology, the customer-facing experience and banking services.

“Level was built to challenge the status quo in banking and put an end to the era of big banks holding people’s money while giving them no interest, a clunky app experience, and frustrating customer service,” said Level founder and CEO Bryce Galen, in a statement.

“Although several challenger banks have launched in recent years and most compare favorably to traditional banks, surprisingly few of them deliver a strong enough customer value prop to truly compel people to switch their primary banking,” Galen told TechCrunch. “For instance, Square Cash has a reliable app with rotating cash back perks, but lacks FDIC insurance or phone customer support. Chime has FDIC insurance and phone customer support, but lacks meaningful customer rewards or 24/7 support availability,” he continued.

“Level addresses this by leveraging the technical foundation, team experience, and bank partner deals that undergird Zero to deliver better customer value across all these dimensions — app, support, and economics — in a highly accessible product,” Galen said.

Level is available today on both iOS and Android, after first signing up on levelbank.com or on mobile.