Walmart’s holiday quarter didn’t perform as expected. That’s the big news today from the retailer’s weak Q4 2019 earnings, which saw revenue of $141.67 billion versus the $142.55 expected and adjusted earnings per share of $1.38 versus the $1.44 expected. The company cited a number of factors, including “softer” than anticipated holiday sales in U.S. stores — particularly softer sales of toys, media and gaming, and apparel during the month of December.

Overall, the earnings point to the challenges for Walmart in a market where more consumers than ever are choosing to shop online. Walmart, meanwhile, still makes the bulk of its money from retail stores, not online, though it’s heavily investing in the latter. That leaves it at mercy of the sort of problems it faced in Q4 — like the trouble with the toy industry (that also hit Target), a lack of newness in gaming, a shorter holiday shopping season, and even a warmer winter than has depressed apparel sales across retailers.

Even as large as Walmart’s stores are, they’re still constrained by shelf space and square footage. And when inventory doesn’t move as quickly as it should, sales suffer. In Q4, Walmart’s U.S. same-store sales were up 1.9%, which was short of the 2.3% expected.

By comparison, Amazon’s holiday results crushed expectations. It reported record sales, Prime membership that soared to 150 million paying subscribers, and one-day and same-day deliveries that quadrupled over the same quarter the prior year.

So far, Walmart, like Target and others, has been fairly successful in taking the hybrid approach to retail — meaning its brick-and-mortar business and online side aren’t separated, but rather work together to drive shoppers into stores to pick up their online purchases. Walmart’s pickup business, including online grocery pickup, is helping capture market share and grow Walmart’s overall e-commerce sales.

That remained true in Q4, as e-commerce sales were up 35% with online grocery helping drive those increases. Walmart even boasted grocery sales on a two-year stacked basis were its “best in the past 10 years.” The retailer has also been quickly expanding the number of stores that support online grocery, and ended the year with nearly 3,200 grocery pickup locations and 1,600 stores offering grocery delivery.

However, in a quarter that’s all about boosting business by way of holiday shopping, it’s worth noting that Walmart’s e-commerce sales were up by 41% last quarter, more than the 35% in Q4. 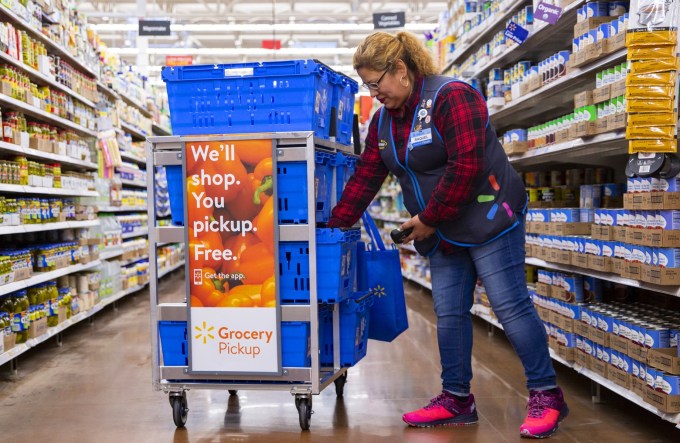 One area where Walmart may need to more quickly expand in the months ahead is its Delivery Unlimited service. Launched in 2019, the membership program for grocery delivery competes with Instacart and others by allowing grocery delivery customers to save on their per-delivery fees by way of a monthly or annual subscription. The company didn’t offer an update on where the program is now available, though it had planned for 50% coverage across the U.S. by year-end.

Meanwhile, Target has now expanded its Shipt same-day grocery delivery service to include non-grocery items from its stores, and has integrated Shipt directly with its own app and on Target.com. And of course, Amazon’s Prime members can shop grocery thanks to Whole Foods, as well as rush their everyday orders courtesy of Amazon’s ever-faster ship times.

In addition, Walmart’s still unprofitable e-commerce business faced other struggles in 2019. Some of its acquisitions in apparel haven’t paid off as anticipated. Last year Walmart sold off Modcloth, Bonobos laid off staff and founder Andy Dunn left. Walmart also shut down Jet.com’s city grocery business, and it just wrapped up its experimental shopping service Jet black.

Walmart additionally pointed to issues in Q4 related to political unrest in Chile, which disrupted the majority of its stores. However, Sam’s Club, Walmex, China and Flipkart did well.

“The holiday season delivered positive transaction growth and underlying expense leverage was strong for the
quarter. However, it wasn’t as good as expected due to lower sales volumes and some pressure related to
associate scheduling,” said Walmart CFO Brett Biggs, in a statement. “We understand the factors that affected our results and are developing plans to address them. We remain confident in our business strategy and our ability to deliver value and convenience for our customers through an integrated omnichannel offering across the globe,” he added.

The retailer also offered lowered 2021 guidance, with earnings expected in the range of $5.00 to $5.15, below analysts’ estimates of $5.22. Walmart said this doesn’t include any impact from the coronavirus outbreak, but it’s continuing to monitor the situation.