In case you haven’t heard, VCs are loving on workplace software as of late, and productivity tools that help teams collaborate seem to be a particular frothy area of investment. A smattering of top VC firms and angels, including General Catalyst, First Round Capital, Bloomberg Beta, Biz Stone and Ellen Pao, are throwing their confidence behind a new productivity startup called Range.

The tool is focused around helping small teams collaborate, grow closer and track their work together. There are quite a few startups with this exact pitch, Range’s key advantage seem to sit with their founding team, which is helmed by Medium’s former head of engineering Dan Pupius, Jennifer Dennard (people ops at Medium) and Braden Kowitz, who was a design partner at GV. The company has used their network to build out an early network of customers, including teams at Twitter, Carta and Mozilla, as well as a network of VCs that are bankrolling their efforts.

The SF-based team tells me they have locked down $6 million in seed funding led by General Catalyst as they look to expand their customer base. I chatted with the very nice team of co-founders over a Zoom call and got to see how they used the product internally.

“I left Google to join Medium with [Ev Williams and Biz Stone], and we were experimenting with a bunch of different organizational practices, really trying to answer the question of why do companies get worse as they get bigger and could we deploy different management practices at Medium in order to prevent that issue,” Pupius told TechCrunch. “Through that journey we started building internal tools and we kind of saw this opportunity for software to intentionally encode a lot of the organizational processes or values, and then towards the end of my tenure at Medium, I reconnected with Braden and Jen and we just essentially decided to tackle the problem together.” 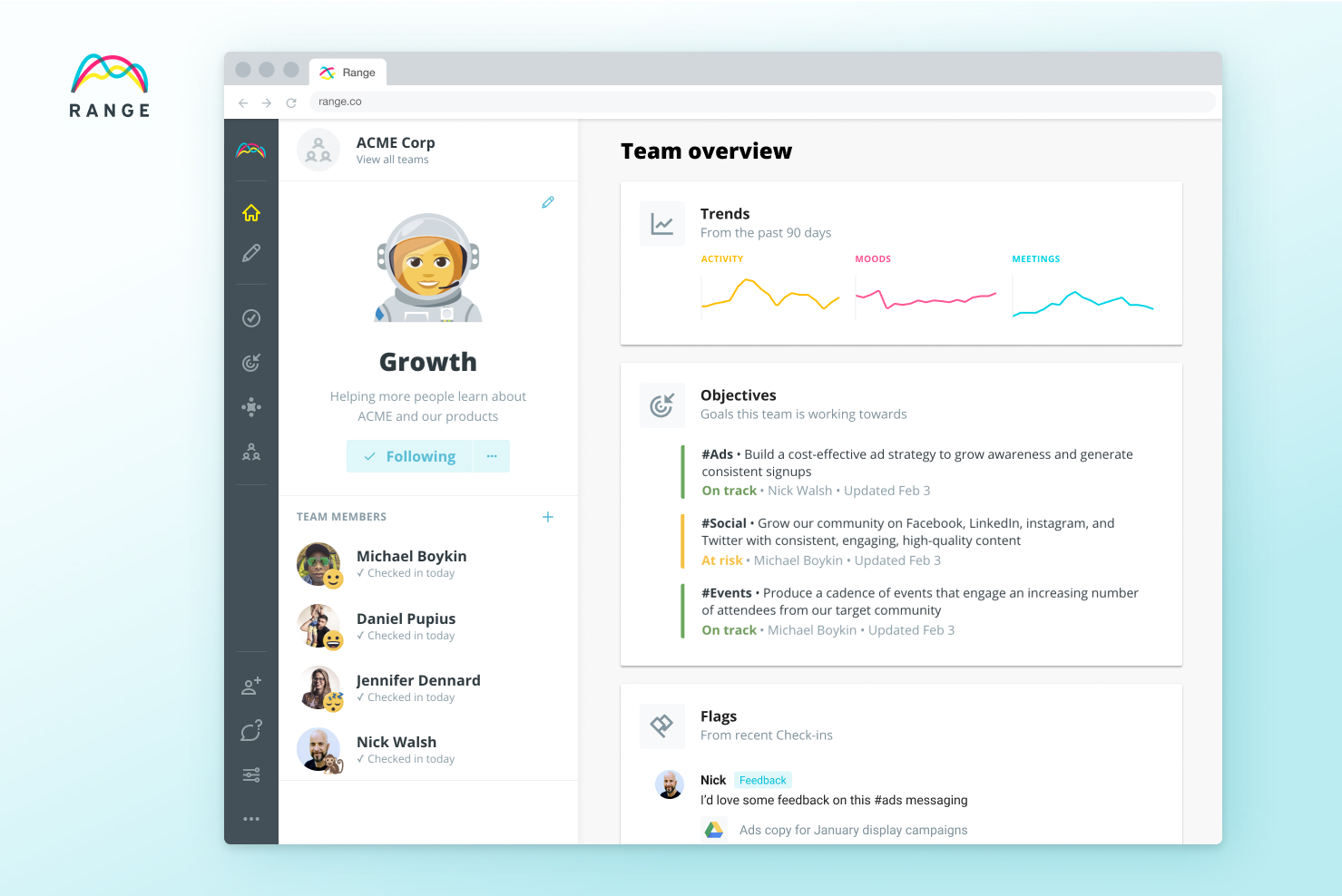 The core of the product is a bit of a replacement to stand-ups, prompting each user to note what they’re working on every morning, which they can tag to existing larger projects and which is then all interconnected and viewable by members of the specific Range team. The need for a product like this really highlights one of Slack’s big limitations, where even with threads, there really isn’t a great way for communications to be organized in a digestible manner. Every update in Slack drives a conversation that pushes salient info further up the history into obscurity, something that can especially harm remote teams.

Beyond check-ins, Range is also helping teams keep track of their objectives and meetings as well as team directories. The product has integration support with Google Docs, Google Calendar, Slack, Asana, Jira, GitHub, Trello, Quip, Figma and others to ensure that information isn’t getting further siloed by adding a new piece of productivity software to the mix. The product has a startup-friendly pricing structure; it’s free for teams under 10 and each additional member costs $14 per month. Pricing obviously gets a bit more customized when it comes to larger customers.

Range will likely draw some comparisons with Notion from an organization standpoint, though it also feels much more smoother as a result of being less open-ended. One of the more unique aspects of the product is that the top of the home screen isn’t centered on OKRs or analytics, rather it asks team members a new question every day meant to foster further bonding, and asks them to describe how they’re feeling with an emoji. It’s kind of silly, but the team hopes that short bursts of introspection can push teams closer together in subtle ways that collaboration software doesn’t usually enable.

“We found that people are doing really cool things but they’re not talking to each other about it,” Dennard told TechCrunch. “And so one of the advantages we have as a company is that we can actually help create that community for people.”