Walmart is shutting down its personal shopping service, Jet black, on February 21, after struggling to find adoption or additional investment. The service had allowed New York-area customers to text message orders for home delivery. According to its website, Jet black will now no longer accept new orders and will refund its customers their most recent $50 monthly membership fee.

The retailer is trying to spin the shutdown as a learning experience, noting that part of the initiative was to test and build technology that could eventually be applied to other parts of Walmart’s business. In Jet black’s case, Walmart learned about conversational commerce and how customers could use text messages to shop.

But according to an earlier report from The Wall Street Journal, Walmart had discussed investment with several potential partners, including Microsoft and VC firm NEA. Those talks didn’t pan out. Jet black, the report said, had gained fewer than 1,000 customers and remained a money-losing business. 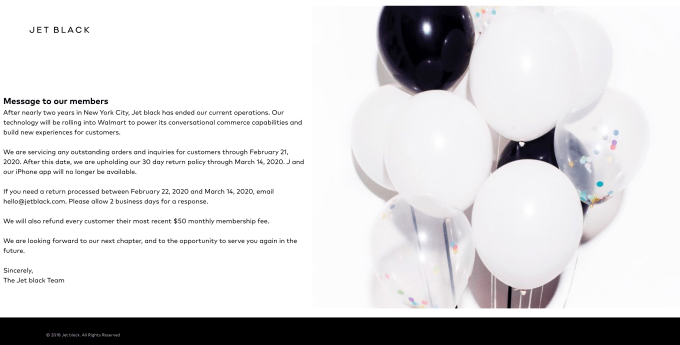 To be fair, a high-end shopping service was largely an experimental concept for Walmart to dabble in, and it’s not surprising that it didn’t take off. After all, the Walmart brand today is aligned with cost savings and mainstream America, not necessarily the well-to-do, time-strapped urban parents to whom Jet black aimed to cater. It also overlapped with Walmart’s own home delivery options, including its successful Walmart Grocery service, which could deliver the fresh food Jet black could not.

Jet black received more attention than it likely warranted, given its concept and limited reach, for a few reasons. The service, which arrived in May 2018, was the first project to debut from Walmart’s tech incubator, Store No. 8, which drew interest. In addition, Jet black’s co-founder and CEO Jenny Fleiss previously co-founded Rent the Runway, a popular clothing rental startup catering to a similar upwardly mobile demographic.

Jet black also arrived at a time when a few startups had been trying text-based shopping, including Hello Alfred, Magic, GoButler, Operator, Fetch, Scratch and others. (Most have since failed or pivoted.) Walmart’s entry into this market, at the time, was then considered notable.

Walmart claimed last July Jet black’s customers were spending $1,500 per month, on average. But there weren’t enough customers — or efficiency in the business model — to make Jet black profitable.

In addition, Fleiss left the business last year, signaling Jet black’s struggles. She was replaced by Nate Faust, Walmart senior vice president of e-commerce logistics. The Journal reported Jet black was losing as much as $15,000 per year per member, as of last summer. Today it says 293 Jet black employees will be laid off as a result of the shutdown.

A Walmart spokesperson confirmed this figure to TechCrunch, as well, noting that 58 other employees are being retained to help apply Jet black’s learning to other areas, including Walmart Grocery.

“We’ve learned a lot through Jet black, including how customers respond to the ability of ordering by text as well as the type of items they purchase through texting,” said Scott Eckert, SVP, Next Generation Retail and Principal, Store No 8, in an announcement. “We’re eager to apply these learnings from Jet black and leverage its core capabilities within Walmart,” he added.