As the streaming battles heat up, Netflix is hoping a new partnership with Samsung will help it fend off rivals. At Samsung’s Unpacked event this week, the mobile device maker announced a deal with Netflix that will bring to its Galaxy smartphones special bonus content associated with several Netflix original shows. The partnership also allows Netflix to more deeply integrate its streaming service with Samsung devices.

The latter part of the partnership involving device integration is fairly standard. In Netflix’s case, Samsung will allow users to launch Netflix content by way of its voice assistant Bixby. Netflix will also deliver recommendations to Samsung users, and will be better integrated into specific Samsung mobile features, like search and its discovery platform, Samsung Daily.

It’s not unusual for Samsung to work with tech companies to offer tighter integration and distribution for their app. For example, Samsung and Spotify announced a formal partnership in 2018, which has since resulted in consumer-facing features like Spotify’s deep integration with the new Galaxy Buds+, Galaxy S20 and Galaxy Z Flip.

The new Netflix content partnership, on the other hand, is unique.

Though Netflix didn’t go so far as to announce original series or movies only available to Samsung users, it will offer bonus content to Samsung device owners that won’t be found elsewhere. This includes behind-the-scenes footage, companion stories and other bonus content — much of it filmed by the Samsung Galaxy S20’s new camera, of course. 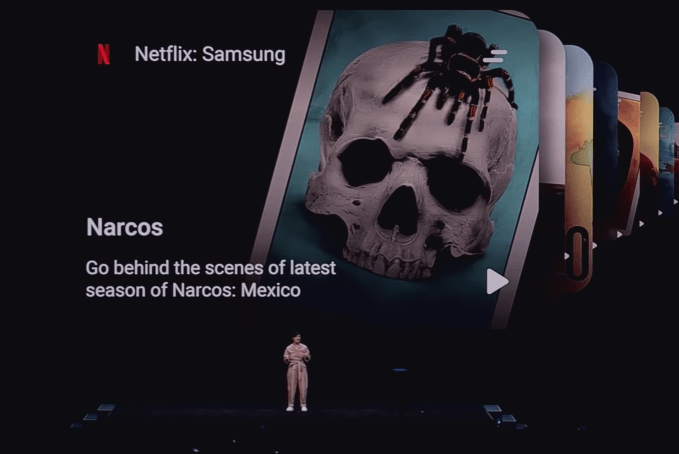 The two companies have a decade-long relationship, which has seen them working together on joint marketing campaigns and other advertising. However, they’ve not before done a content deal like this.

“The mission of this partnership [is] to make the Netflix viewing experience on Samsung mobile the absolute best it can be,” said Netflix CMO Jackie Lee-Joe, announcing the company’s plans at Samsung’s event. “This means that even more users can enjoy our best-in-class stories across all genres through even better product integration with Galaxy mobile devices,” she noted.

The partnership comes at a critical time for Netflix. Its subscriber growth in the U.S. has gone flat, even as its international growth is booming. More importantly, perhaps, is how Netflix is coming up against a whole host of new streaming competitors with money to burn — including Disney+, Apple TV+, WarnerMedia’s HBO Max, NBCU’s Peacock and Quibi.

What’s worse is that these new streaming services already have ways to tightly integrate with mobile devices or have partnerships allowing them to distribute their service to millions.

For example, [TechCrunch parent] Verizon is offering its mobile subscribers a free year of Disney+. Jeffrey Katzenberg’s mobile streaming service Quibi is partnering with T-Mobile. NBCU owner Comcast has its own mobile network, Xfinity Mobile, and HBO Max hails from AT&T’s WarnerMedia. And Apple, for now, is just giving away Apple TV+ for free to anyone who buys a new iPhone, iPad, iPod touch, Apple TV or Mac.

That leaves Netflix without a competitive distribution strategy. And its only viable option to get similar global scale is Samsung, which had an 18.8% worldwide market share in Q4 2019 (in terms of shipments), compared with Apple’s 20%. Samsung also has solid distribution in key international markets where Netflix is seeing its strongest growth.

One argument against the Samsung partnership is that offering bonus content to Samsung users could alienate those watching Netflix on other platforms. Forbes even referred to the move as “controversial.” However, a Netflix spokesperson confirmed with TechCrunch that the special content will be published on Samsung Daily, plus Samsung.com, and Samsung’s social channels “for all to enjoy.”

They also told us that Samsung won’t have the exclusive rights to the content — in fact, Netflix has the right to publish the content to its own social media channels, if it chooses.

“We believe this significant partnership will provide millions of Samsung Mobile users across the globe the best mobile entertainment experience, and make discovering new stories around the world easier than ever,” said Lee-Joe.

Update, 2/13/20 4:30 PM ET to add that Netflix has the rights to publish the bonus content, too, making this a non-exclusive deal.