When Google announced that it was acquiring data analytics startup Looker for $2.6 billion, it was a big deal on a couple of levels. It was a lot of money and it represented the first large deal under the leadership of Thomas Kurian. Today, the company announced that deal has officially closed and Looker is part of the Google Cloud Platform.

While Kurian was happy to announce that Looker was officially part of the Google family, he made it clear in a blog post that the analytics arm would continue to support multiple cloud vendors beyond Google.

“Google Cloud and Looker share a common philosophy around delivering open solutions and supporting customers wherever they are—be it on Google Cloud, in other public clouds, or on premises. As more organizations adopt a multi-cloud strategy, Looker customers and partners can expect continued support of all cloud data management systems like Amazon Redshift, Azure SQL, Snowflake, Oracle, Microsoft SQL Server and Teradata,” Kurian wrote.

As is typical in a deal like this, Looker CEO Frank Bien sees the much larger Google giving his company the resources to grow much faster than it could have on its own. “Joining Google Cloud provides us better reach, strengthens our resources, and brings together some of the best minds in both analytics and cloud infrastructure to build an exciting path forward for our customers and partners. The mission that we undertook seven years ago as Looker takes a significant step forward beginning today,” Bien wrote in his post.

At the time the deal was announced in June, the company shared a slide, which showed where Looker fits in what they call their “Smart Analytics Platform,” which provides ways to process, understand, analyze and visualize data. Looker fills in a spot in the visualization stack while continuing to support other clouds. 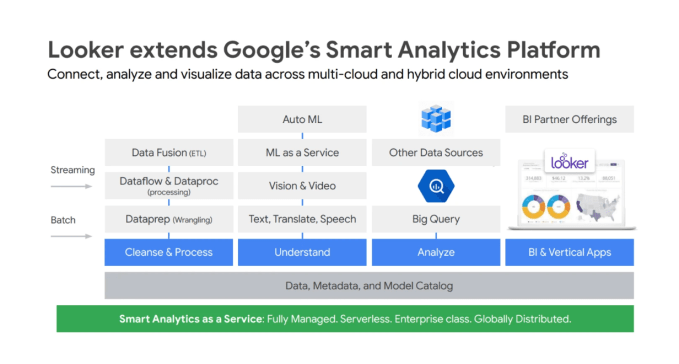 Looker was founded in 2011 and raised more than $280 million, according to Crunchbase. Investors included Redpoint, Meritech Capital Partners, First Round Capital, Kleiner Perkins, CapitalG and PremjiInvest. The last deal before the acquisition was a $103 million Series E investment on a $1.6 billion valuation in December 2018.