Spotify is launching a new feature called songwriter pages, which allows songwriters to showcase a list of the songs they’ve written, alongside their most frequent artist collaborations. The pages will also include a new “Written By” playlist of the songwriter’s songs, allowing listeners to stream their songs, follow their new material, and surface the songwriters’ work through Spotify’s search engine.

At launch, Spotify is debuting songwriter pages for top artists, including Meghan Trainor, Fraser T. Smith, Missy Elliott, Teddy Geiger, Ben Billions and Justin Tranter, among others. As the feature is still in beta, the pages are being enabled by the publishers and Spotify together, in partnership with the songwriters. However, interested songwriters can apply to join the program by filling out an online form.

To kick off the debut of songwriter pages, Spotify is featuring the first “Written By” playlists on the home tab for all Spotify listeners.

The streaming music company has been working for some time to offer more credit to those behind the scenes of the music creation process. In 2018, Spotify added songwriter and producer credits to its app. These sort of credits used to be included on physical albums’ liner notes, but had been dropped in the digital era. The addition was also meant to help Spotify better identify and pay the songwriters and producers in the future — a complicated problem for streaming services, and one that’s cost Spotify a lot of money.

Spotify says the changes it has made to its app have started to turn things around. Since Spotify began displaying song credits in 2018, it claims to have seen a 60% increase in how often labels and distributors credit songwriters on their new releases. 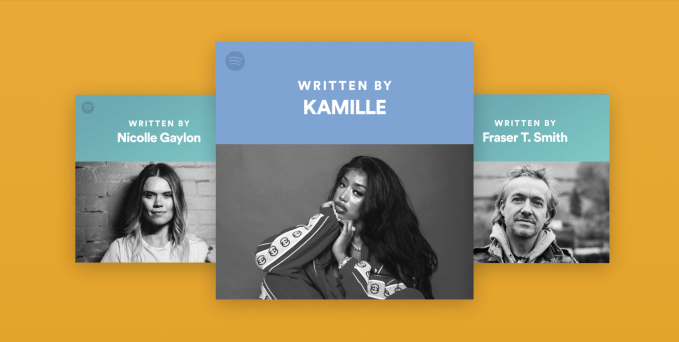 The “Written By” playlist link also can be shared outside of Spotify, such as on the songwriter’s website or social media.

To access songwriter pages, you’ll first right-click on a track on desktop or tap the “…” next to the track if on mobile. Then click on “Song Credits” and select a clickable songwriter’s name. From the songwriter’s page, you can view and follow their playlist or click “Listen on Spotify” to stream their credited songs immediately.

The feature is still in beta testing, so only a limited number of songwriters have pages and playlists as of today’s launch. But Spotify aims to expand the feature to more songwriters in time and will make future announcements on its @SpotifyforArtists Twitter as the beta expands, it says.

Spotify had been criticized over its songwriter credits feature at launch, which wasn’t always dependable, some found. More broadly, the problem with bad metadata is one that’s impacting the entire streaming industry, not just Spotify. And when services get it wrong, it can lead to a lot of confusion.

“Spotify is always working to create new and better ways to promote music discovery — for artists, for songs and, increasingly, for songwriters,” said Jules Parker, head of Publishing & Songwriter Relations, Spotify, in a statement. “The launch of publicly visible songwriter credits on Spotify in 2018 was merely a first step. Together with the publishing industry, we’ve continued to evolve our data sharing and analytics efforts, and are proud to unveil this next iteration,” Parker added.