Rae Witte Contributor
Rae Witte is a New York-based freelance journalist covering music, style, sneakers, art and dating, and how they intersect with tech. You can find her writing on i-D, The Wall Street Journal, Esquire and Forbes, among others.
More posts by this contributor

All it takes to win a gold medal at the Olympics is the best performance on the day of the event. Champions may be made in countless training hours, but championships, finals and even world title-representing gold medals are won in final seconds and millimeters through speed or accuracy and endurance in that final race, round or game.

To that end, Nike introduced innovation-led products with proven performance-enhancing results for Tokyo 2020.

By driving down into the minutiae of every Olympic event to find the best opportunities to improve design, the brand is ensuring its footwear directly caters to those crucial moments as much as athletes’ preparation for them.

“We are innovating into the infinitesimal and little things that really matter,” John Hoke, Nike’s chief design officer, told me. Although he’s held his position for the last decade, Hoke has actually been with Nike for about 30 years, and through seven Olympic games. “We get to stop and slow down the game and sort of study and obsess over that. We are obsessing over those moment-of-truth moments.”

This obsession resulted in a new line of shoes designed to enhance the moments of truth: the Nike Zoom Viperfly; Air Zoom BB for basketball; the Air Zoom Mercurial for soccer; and the long-awaited Nike Air Zoom Alphafly NEXT% for elite runners. The models contain innovations developed over months of research conducted in a lab in the Pacific Northwest.

The data behind the design

In conjunction with a design team as elite as the athletes it caters to, the Nike Research Lab is an integral part of these advancements. Founded 40 years ago in Exeter, N.H., the lab is now located on Nike’s Portland campus and focuses on biomechanics, physiology, perception and human behavior, and data science.

Athletes contribute performance insights to the lab through testing and verbal feedback that the researchers quantify into performance, movement and even fatigue data to improve the product. Researchers have been able to pinpoint the moments during competition when athletes are operating from a place of need or fatigue, thus providing a direction for designers to functionally improve apparel and footwear.

This resulted in a major focus on innovations for energy preservation and responsive technology.

However, this has raised questions about whether the shoes are offering an unfair advantage or are simply the most energy-efficient.

The shoe’s cushy foam midsole embedded with a single carbon fiber plate is advertised as giving athletes “the sensation of being propelled forward.” By lowering the energy expenditure, runners reduce fatigue, resulting in faster times. An independent study conducted by The New York Times found the technology actually improved runners’ efficiency 4% to 5%, which is more than what the brand claims.

In the past year, Eliud Kipchoge ran the first sub-two-hour marathon time in last fall’s INEOS 1:59 Challenge. Sifan Hassan became the first woman to win a gold medal in both the 1,500-meter and 10,000-meter events at a single World Championships or Olympic Games. Earlier last year, Britain’s middle-distance runner Laura Muir broke the British indoor mile record in a similar pair of Vaporfly prototype spikes, and Brigid Kosgei set a new women’s marathon world record. And the five fastest-ever marathons times have been recorded by runners in iterations of Nikes with the new technology.

Leveraging learnings from the elite runners’ groundbreaking successes since the release of Nike Zoom Vaporfly Elite in 2017, the Nike design team approached spike design with a fresh set of eyes. The research lab found that most runners’ final 20 meters of a 100 meter race were the slowest, and that they were actually decelerating as they crossed the finish line. The goal is to shorten the deceleration time.

“I constantly hear athletes talk about getting to a state of flow, which is this wonderful state where everything slows down and you can’t wait to occupy that space, that time, that second so that you can do exactly what you’ve been trained to do,” Hoke says.

His team is determined to provide athletes with products that allow their bodies to perform in that space.

The Nike Air Zoom Viperfly track spikes are crafted specifically for the 100-meter race. As most sprinters’ heels barely touch the ground throughout the race, the ultra-light footwear features denser knit through the body of the shoe for support and lighter knit through the heel.

More cushioning in the form of protective foam within the heel of the shoe compensates for the lighter knit, providing added protection without the weight specifically for times of deceleration. 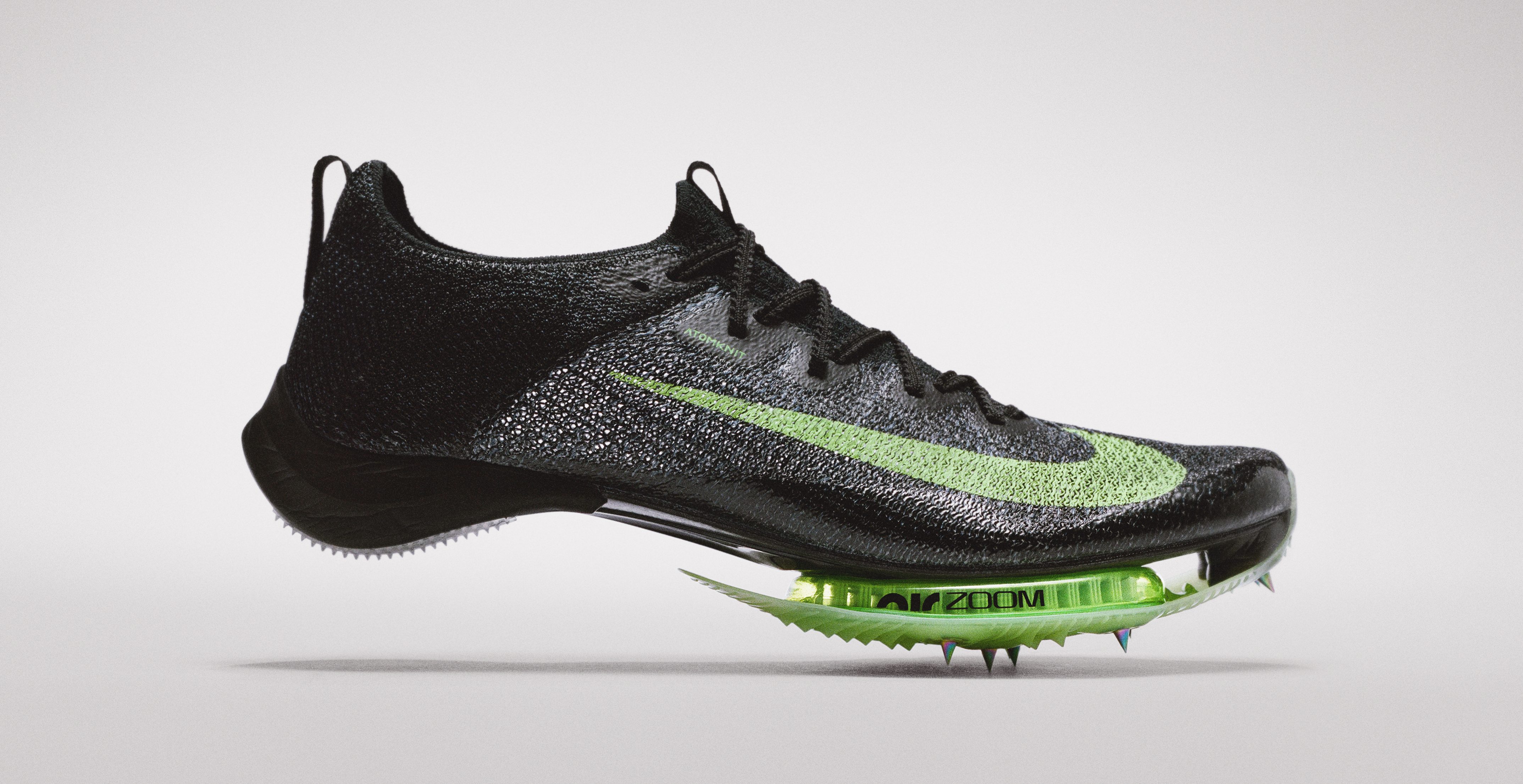 Similar to those final 20 meters of the 100-meter dash, examining basketball led researchers to determine that players experience the most fatigue in the fourth quarter, as one would expect, and that they run an average of three to four miles during gameplay. Sprinting in short, court-length bursts for three to four miles results in the most fatigue toward the end of a 40-minute Olympic basketball game.

Striving to provide a product for the most fundamentally proficient fourth quarter led the design team to the new Nike Air Zoom BB.

“The goal is to get them to the final 15 seconds without a dropped step, that they haven’t lost any ability to get to the basket or get to the ball and to keep efficient shooting form so they’re in perfect shape at the very end,” Hoke shares.

Nike React foam, which first launched in basketball sneakers in June 2017, is known for offering runners cushioning and energy return while being lightweight and maintaining durability. Typically, designs have to sacrifice comfort for energy return or weight for durability and vice versa.

The new Nike Air Zoom BB leverages Nike React foam under the heel, allowing athletes to carry less weight and receive more energy return, turning the force from their body into momentum in each step.

Two Air Zoom units are positioned under the ball of the athletes’ feet — pressure points consistent with basketball performance — to absorb and return energy, which results in reduced fatigue.

And for the Nike soccer teams, the focus comes down to ball control and the shoes’ effect on catching and passing. This brings a few firsts for Nike soccer footwear.

“If we marry these surfaces (the ball and the boot) in more of a symbiotic way, their touch radically goes up,” Hoke says of the inspiration for the innovation. “So that goes all the way up the leg into the brain, and they feel like they’re better connected to the ball.”

The Air Zoom Mercurial features a 3D-printed Flyknit-like upper, known as Flyprint, for the first time. “We’ve used skinned Flyknit or Flyknit material with a skin on top of it. We have used multiple types of synthetic and natural leathers. We’ve looked at covered canvases,” Hoke says recalling other options that were considered. Flyprint is Nike’s first 3D-printed textile upper in performance footwear and debuted on the Nike Zoom Vaporfly Elite Flyprint, worn by Kipchoge in 2017.

By thinking of the surface of the new Mercurial’s upper as a series of contoured terrains, 3D printing allows for the most precision.

“And each surface can be done specifically for a striker, a midfielder or defender,” he adds. “3D printing offers a completely new way of designing that surface.”

The cleat also features Air Zoom technology, with a 4.5 millimeter bag focusing on responsiveness more than cushioning for fatigue reduction like the larger Air Zoom systems for other sports. “When they plant their foot into the grass, and we have these cleats perfectly designed, they feel like they can push off in any direction.”

With significantly larger cushioning specifically for comfort and energy return — rather than sharp running patterns demanded of the Mercurial — the long-awaited Nike Air Zoom Alphafly NEXT% has finally been released.

Two exposed Air Zoom bags sit side by side for extra cushioning. These are designed for impact protection and performance and include the freedom to expand in order to minimize energy loss and maximize responsiveness.

A modified carbon fiber plate (different from the three exhibited in the patent docs) allows Nike to maintain the cataclysmic sensation of propelling the runner forward. 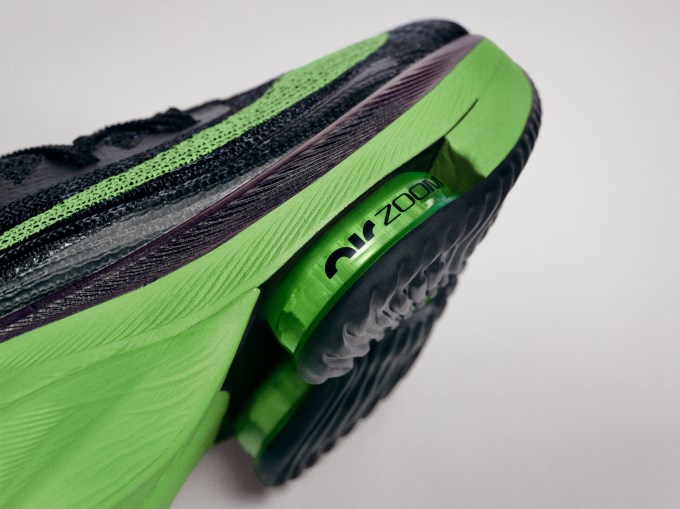 The plate, which is embedded in the ZoomX foam of the Alphafly NEXT%, provides stability and increased stiffness in the forefoot. And its position within the entire system also reduces stress on the ankle joint.

But there were some questions in the lead-up to the shoe’s release.

World Athletics, the governing body of track and field competitors worldwide, announced that there would be an “indefinite moratorium” on shoes with a sole exceeding 40 millimeters and containing more than one ridged embedded plate of any material.

“I believe these new rules strike the right balance by offering certainty to athletes and manufacturers as they prepare for the Tokyo 2020 Olympic Games, while addressing the concerns that have been raised about shoe technology,” said Sebastian Coe in a statement. “If further evidence becomes available that indicates we need to tighten up these rules, we reserve the right to do that to protect our sport.”

It was speculated that the combination height of the foam stack and the angle of the carbon plates could result in an unfair advantage. The stack height for the new Nike Air Zoom Alphafly NEXT% is set to increase to 39.5 millimeters, which is an increase from the 37 millimeters in the Nike ZoomX Vaporfly NEXT% that was released in 2017.

This means that the shoe won’t be affected by Friday’s World Athletics announcement.

Unseen since Kipchoge wore them in the INEOS Challenge, they’ll be available to Nike Members this month, with broader distribution later in the spring.

In what is predicted to be the hottest Olympics in history, Nike footwear innovations are dedicated to causing the lowest level of energy expenditure as possible through diving deeply into the physics of sport.

“We know that fatigue and the loss of control on space becomes where injury happens and where errors happen. We’re just trying to give athletes just a little bit more of an advantage, a little bit more confidence through our designs,” Hoke says.

After a ground-breaking year in elite running efficiency and subsequent better performance in athletes in Nikes, we’re ready to let this summer’s games begin. 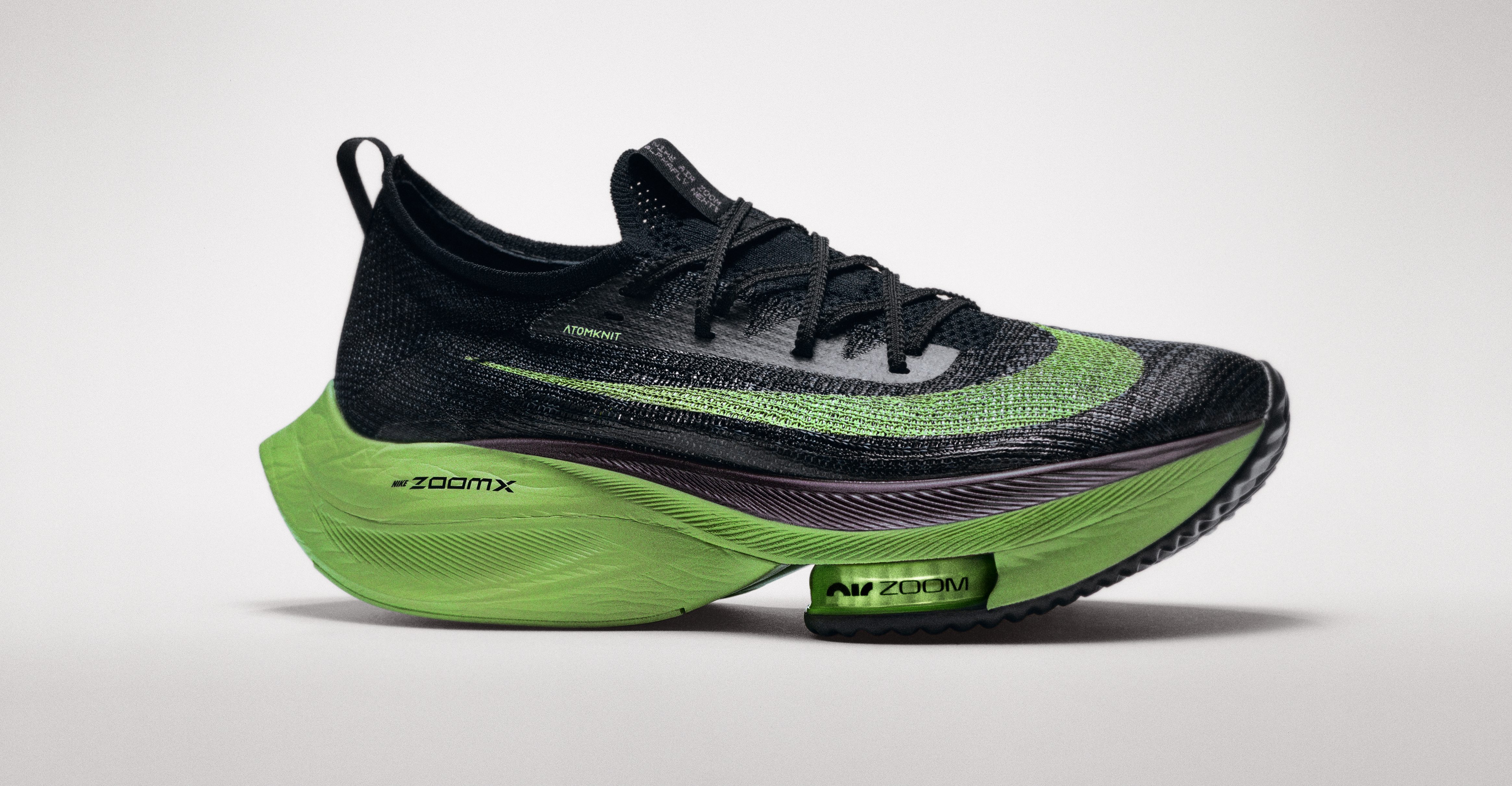