Shares of American electric car company Tesla are sharply higher again this morning, adding $122.40 (or 15.69 percent ) to their value before regular trading today. The gains come after Tesla has rapidly added value in recent days, including a nearly 20 percent gain yesterday during regular trading; shares of the company were worth around $560 a week ago. Today they are valued at around $900.

The company reported earnings on January 29th, last Wednesday, leading to a nice bump in the company’s value. That sort of post-earnings move is quite normal. However, its value appreciation since that event is a bit harder to understand.

And yet here we are. Is it a short squeeze? Mere enthusiasm after a bullish analyst call? Is this battery news enough reason for Tesla to rally so sharply? The fact that it has a new car coming? Perhaps a combination of all of the above?

What matters is that Tesla shares are booming today, providing the company with implied access to capital that it could use to pay down debt. (Tesla has a little over $13.4 billion in debt, according to its financial documents.) And it says that the company’s rising revenue multiple isn’t that bonkers when you compare it to historical levels (implying that the company’s current valuation is not as wild as one might think, when compared to prior valuations the company has enjoyed).

Here’s YCharts data on the matter: 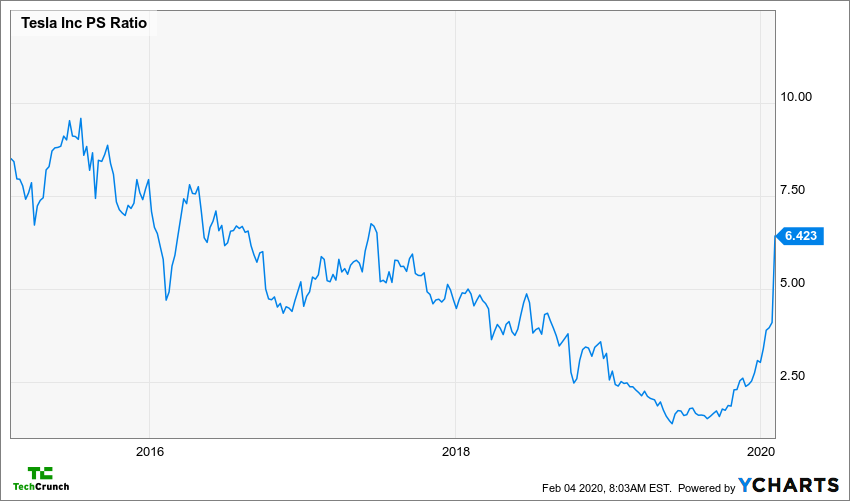 It’s aggressive, yes. But the rally is not as insane as I would have thought. You can fill in the blanks yourself, but Tesla is putting on a show and it’s annoyingly exciting.