Couchbase, the popular NoSQL database, today announced the launch of Couchbase Cloud, a fully managed database-as-a-service (DBaaS) offering for enterprises. Once the service is generally available later this summer, users will be able to spin it up on AWS and Microsoft Azure, with support for Google Cloud coming a bit later this year. This, the company claims, makes it the first “SQL-on-NoSQL DBaaS that supports multiple cloud providers.”

What’s probably more important for its customers, though, is that Couchbase Cloud will allow them to retain full control of their data inside their own Virtual Private Cloud. Couchbase promises that deploying the service only takes a few clicks and, as you would expect from a fully managed service, the company will handle managing and upgrading the database service.

The underlying infrastructure stack uses open-source technologies like Kubernetes, Prometheus and Grafana, but as a fully managed service, that’s not something the users will actually have to worry about all that much. Indeed, Couchbase stresses how its service decouples the underlying infrastructure from its database solution. That includes pricing. Couchbase doesn’t charge its users for the infrastructure they consume. Instead, they’ll continue to pay their cloud provider as usual, which also means they can take advantage of cost savings from reserved instances and other discounts that the various cloud providers make available to their customers. The Couchbase Cloud service itself offers multiple pricing options, including hourly and volume-based pricing.

Traditionally, Couchbase’s focus was on its server and mobile offerings. Adding a fully managed service to this line-up makes a lot of sense, though, as not every company has the expertise to manage its database servers itself. 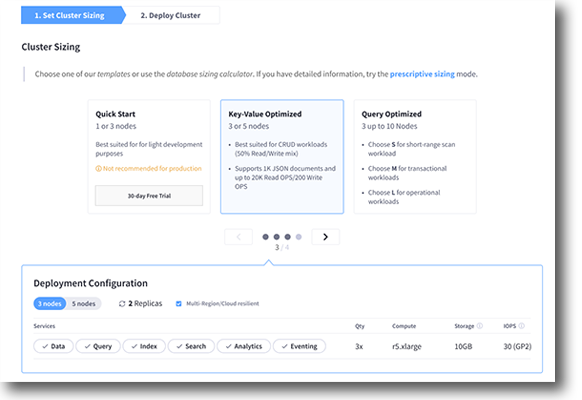