RFocus asks a simple question: What if instead of just antennas and transmitters on access points and mobile devices, we put the things just about everywhere? You know, just totally slather the walls with the stuff? The new “smart surface” from MIT’s CSAIL uses in excess of 3,000 antennas to boost signal strength by nearly 10x.

The department issued a paper today showcasing the technology, which is relatively cheap, with each antenna running a few cents. Better still, it’s low power, either reflecting a signal or allowing it through, depending on the software controller. CSAIL envisions a future where RFocus is used in homes and warehouses to boost signals for the Internet of Things and various network-connected devices. 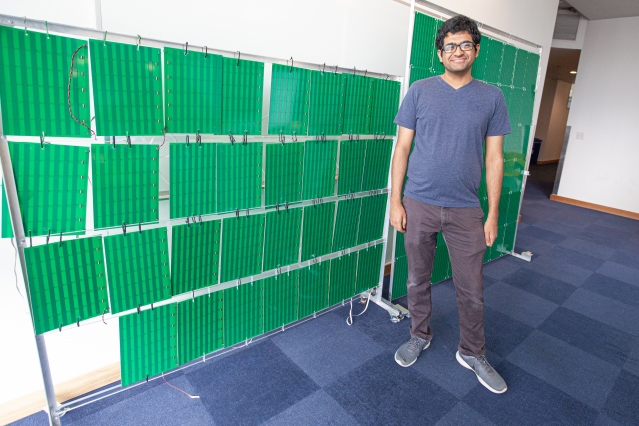 “The core goal here was to explore whether we can use elements in the environment and arrange them to direct the signal in a way that we can actually control,” MIT professor Hari Balakrishnan said in a post detailing the technology. “If you want to have wireless devices that transmit at the lowest possible power, but give you a good signal, this seems to be one extremely promising way to do it.”

No word on a time frame to market here — that’s not really how CSAIL operates. The team also notes that similar research has been conducted by Princeton, though MIT’s focus is on low-cost and a wider range of applications. The notion of full-wall antennas certainly seems a bit far-fetched — and in most cases unnecessary. And given the sort of caution with which many have approached 5G, I suspect more research will have to be done on the long-term effects of such transitions.