New short-form video app Byte, heralded as Vine’s successor, is off to a strong start despite its issues. The app, built by Vine co-founder Dom Hofmann, brings back the six-second videos made popular by Vine which was shut down in late 2016 after Twitter’s acquisition of the popular video-sharing platform. According to new data from Sensor Tower, Byte’s launch has been well-received with over 1.3 million downloads during its first week alone. The U.S. delivered the bulk of these new installs, followed by Great Britain then Canada.

The U.S. contributed 912,000 downloads, or 70% of the installs, the report says. While Great Britain and Canada offered 7% and 6% of installs, respectively. The majority of Byte downloads were also on iOS, with 950,000 iOS downloads compared with 350,000 installs on Android.

Sensor Tower’s new report compares Byte’s figures to Vine’s debut in January 2013, which only saw a total of 775,000 installs during its first week on iOS. However, that doesn’t mean Byte is soon to be a much more popular app than its predecessor. 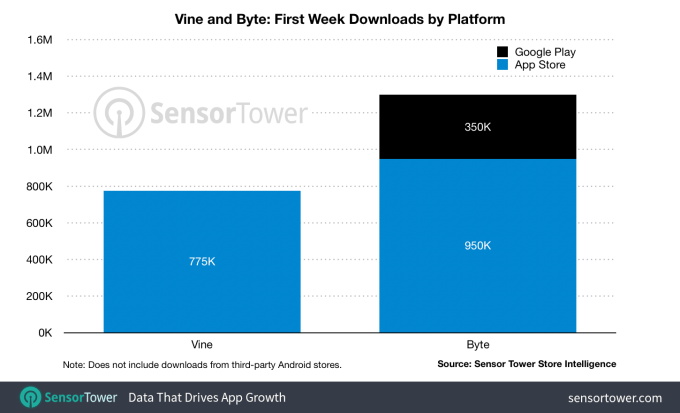 For starters, the app market has grown over the years to include more users and more devices. In 2016, for example, only 2.5 billion users worldwide had smartphones. Now that number tops 3.5 billion. In addition, Vine launched as an unknown startup into a market that had yet to really embrace short-form. Byte, on the other hand, not only takes advantage of its association with Vine, it also arrives at a time when short-form video is now hugely popular thanks to Vine’s success and TikTok, the latter which became the No. 4 most-downloaded app of 2019.

Despite its solid launch numbers, Byte’s debut was not unmarred.

The app immediately saw massive comment spam as bots rushed to fill comment sections with follow requests (and follow for follows), including requests from pornbots. Byte’s early adopters also started snatching up coveted usernames — those belonging to real people, ranging from tech folks to celebs like Taylor Swift and other prominent figures like Trump, Bezos, Tiger Woods and others, Slate reported. The company quickly moved to acknowledge the problem and promised a cleanup was underway. 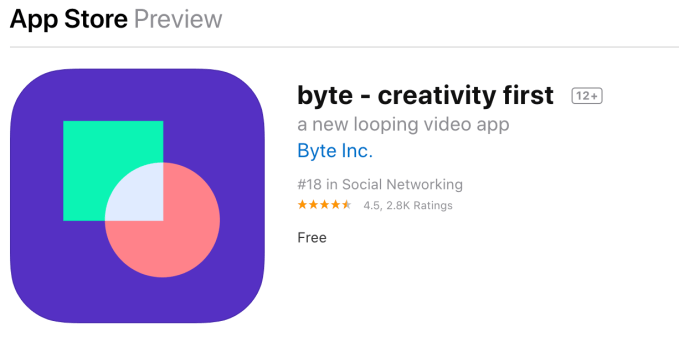 But that’s not Byte’s only issue. The app originally launched with a 12+ age rating, yet was immediately filled with adult humor alongside videos from obvious minors. Surfaced in Byte’s popular feed were videos with dick jokes and sexual humor, and problematic content including distasteful jokes about child abuse and coronavirus victims.

To give you a sense of Byte’s content, a perusal of the “Popular” feed on Friday surfaced a video featuring a teenaged-to-young adult boy joking “if you call me a slut in the comments one more time, I’m going to suck all your d***s.” Another teenaged-appearing boy joked about a prostate exam performed by his dad. A boy of a similar age asks if anyone had ever pooped into someone’s….and then the video cuts off.

It’s unclear if the boys in question are 18 or older, but seeing these — as well as so many other videos featuring dick jokes — followed by videos filmed by very young children was an uncomfortable experience.

Two other videos featured toddlers – one of a dad knocking the baby down, perhaps on purpose, as they played ball, only to later fall himself. Another depicted someone spraying a baby in the face with the kitchen sink nozzle, followed by the baby crying.

One video made fun of Chinese people dying from coronavirus. Another showed a teen smoking a joint, then hearing a siren and running.

Vine videos were strange and dumb in their own way, but the best weren’t typically crass or dirty. Think:  duck army, eyebrows on fleek, hate blockers, what are those, Squidward hits the dab, and so on.

Given the amount of adult humor, Byte’s lack of an age-gate and the app’s 12+ rating was concerning. (Byte updated to 17+ over the weekend. The above videos aren’t surfacing now. We know Apple was taking a look at its content).

Another potential concern was that a lot of Byte’s content was recycled from elsewhere — there were clips from YouTube, FunnyorDie, TV shows, and even TikTok — logo and all. Users also reposted Snapchat videos and memes from around the web.

With the changes to the age rating, it seems Byte may have been alerted to some of its more problematic content. Byte now puts a curated Spotlight feed at the top of its discovery page, where videos curation is improved.

The company on Friday also published the initial details on its Partner Program, touting the potential for revenue other platforms don’t provide.

TikTok, by comparison, hasn’t quite figured out how to monetize — its app has seen 1.65 billion downloads to date, but only grossed $176.9 million in 2019. However, TikTok’s elite are making names for themselves that allow them to grow their brand in other ways, including by directing users to other social channels like YouTube and Instagram, and even doing meet-and-greets with fans.

Whether a whole new world of Byte stars emerges remains to be seen.