Roku’s audio expansions continue with a soon-to-launch software update that gives its existing line of Roku Smart Soundbars the ability to offer a surround sound experience when paired with Roku TV Wireless Speakers. The soundbar had already worked with Roku’s Wireless Subwoofer to add bass to the listening experience, but now they can pair with the wireless speakers or the newly added onn-branded wireless speakers sold by Walmart, also announced today.

The onn Roku Wireless Surround Speakers will be available on Walmart.com and in stores in February.

Like the Roku TV Wireless speakers, these can be paired with the soundbar for surround sound. However, the onn-branded speakers will have some cosmetic differences to better match the aesthetics of soundbar and subwoofer, Roku says. Acoustically, they’ll be just about the same.

The onn speakers also won’t be bundled with different remotes the way Roku’s version is — today, Roku’s version comes with both a voice remote and tabletop remote. The onn Roku Wireless Surround Speakers won’t include a remote, because they’re meant only to pair with the soundbar, which has its own remote. However, this helps to bring the price point down, as the onn Roku Wireless Surround Speakers will be $149 while the Roku TV Wireless Speakers retail for $199.99 (but are frequently on sale, as they are now).

The goal with the software update and new onn wireless speakers is to give Roku customers a way to continue to expand their home entertainment system over time. And because all of Roku’s products are designed to be simple to set up, customers may opt for Roku products because they know the process will be quick and painless. In addition, Roku’s speakers and soundbars are aimed at those who want a more affordable system.

“We want to simplify home theater the same way we simplified streaming and we’re taking a big step towards that vision by expanding our Roku Smart Soundbars to support surround sound capabilities,” said Mark Ely, vice president, Retail Product Strategy at Roku, in a statement. “We want customers to be able to expand their system over time without having to spend a lot of money or run wires throughout the home. The Roku Smart Soundbar is an incredible two-in-one device that adds exceptional sound and powerful streaming to a TV and when Roku TV Wireless Speakers and a Roku Wireless Subwoofer are paired with the Smart Soundbar you get truly immersive surround sound without breaking the bank.”

Roku itself doesn’t sell the other audio accessories you’d need to mount your wireless speakers in the room, but its website points to various Sanus-branded products, like swivel mounts and stands that can help to complete the setup.

Along with the software update, Roku OS is adding new sound settings to enhance the stereo experience, including one for Movies & TV that offers a surround-like experience; another for Music that synchronizes audio across all speakers; and a third for normal stereo where sound will come from the front speakers only. (However, any Surround content will always be heard in surround, says Roku.) 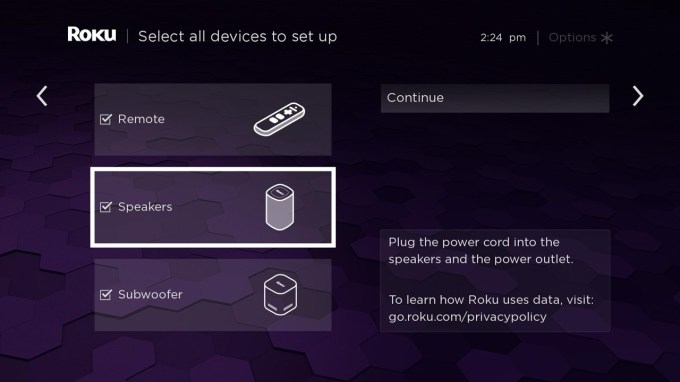 The setup process has also been made easier with tools that now let you set up multiple devices at once or identify which speaker is the left one and which is the right. 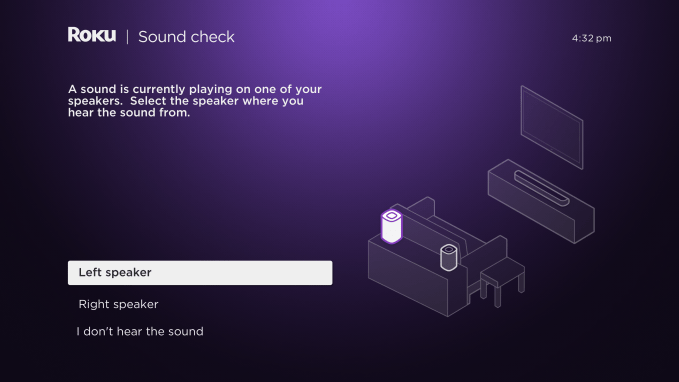 The Roku OS software update will begin rolling out to devices in February, allowing owners of the onn Roku Wireless Surround Speakers and Roku TV Wireless Speakers to pair their devices to their Roku Smart Soundbar.