Apple’s much-awaited online store in India will be operational starting Q3 this year, a little longer than previously expected, a source familiar with the matter told TechCrunch.

The iPhone-maker said in August last year that it was “eager to serve [customers of India] online and in-store with the same experience and care that Apple customers around the world enjoy.”

While the company never shared a firm timeline on when the online and brick-and-mortar stores would be set up in India, it was originally aiming to start the online sales in the country in the first quarter of this year, the source said. (The Q1 launch timeline was first signaled by Bloomberg, which reported that the operations would begin “within months.”)

An Apple spokesperson was not immediately available for comment.

The source said the company was still working on the logistics of setting up the store and that the quarter between July and September was the new deadline. Apple CEO Tim Cook would likely plan an India trip for the announcement, the source said.

The company’s first official physical store in India, to be situated in Mumbai, will take an additional few months of time for setting up and might not be ready by this year, the source said.

India, the world’s second largest smartphone market, eased sourcing norms for single-brand retailers last year, paving the way for companies like Apple to open online stores before they set up presence in the brick-and-mortar market.

“Apple has been struggling with online retail for years now. Finally the government adapted their rules to help them launch their own online store. But now they are unable to launch it,” an industry executive said on the condition of anonymity.

Apple executives have long expressed disappointment at Amazon India, Flipkart and Paytm Mall for offering heavy discounts on the iPhone and MacBook Air to boost their respective GMV metrics, people familiar with the matter have told TechCrunch.

Apple on Tuesday posted a record revenue of $91.8 billion for the quarter that ended in December. Cook said in the earnings call that India was among the markets where the company’s revenue grew in “double-digit” in that quarter. 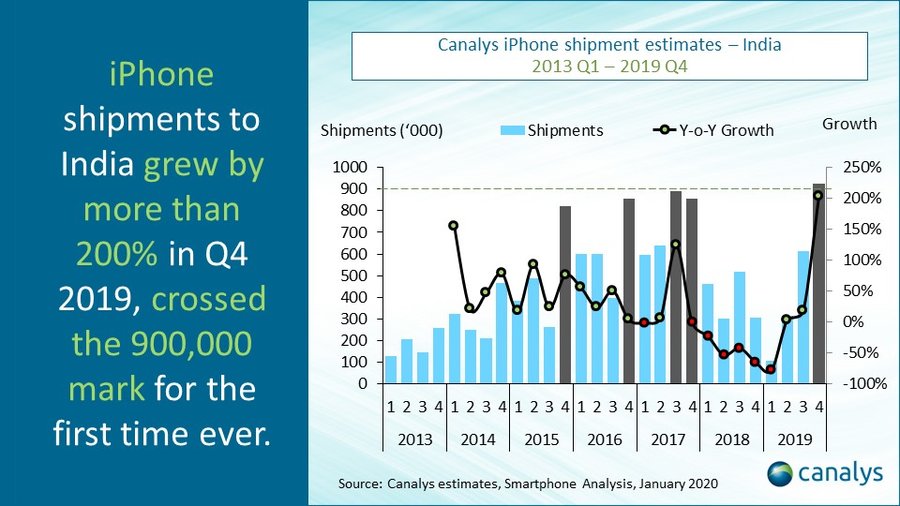 On Wednesday, research firm Canalys reported that Apple shipped close to 925,000 iPhone units in India in Q4 2019, up over 200% annually, in what is the company’s most impressive quarter in the country to date.

Madhumita Chaudhary, an analyst with the research firm, said the company’s move to partner with a local bank to make iPhone 11 more affordable helped it hit “a home-run with its pricing strategy” in the country.

More than 80% of the population in India earns less than $200 a month and smartphones are sold without any bundling with carrier. If that wasn’t a tough sell for Apple already, India’s local laws have made iPhones even more expensive.

Most iPhone models are especially expensive in India as Apple passes on the local import taxes that it pays to the government to its customers in the country. New Delhi maintains strict import duties, but it offers a range of tax benefits to companies that manufacture or assemble their electronic products locally in the nation.

To avail these benefits, Apple began assembling iPhone 7 models in India in 2018. With help from its Taipei-based contract manufacturer Foxconn’s factory in India, Apple has since started to assemble newer generation models such as the iPhone XR. These locally assembled handsets are comparatively more affordable.

“The new iPhones have appealed not just to current iPhone users looking to upgrade, but also to value-conscious premium phone purchasers that are now presented with a formidable price-alternative to the Samsung or OnePlus flagships,” said Chaudhary.

Update: The story was updated at 8.40 AM PT on Wednesday to include the traction iPhones are receiving in India.