Time is supposed to make technology better. The idea is simple: With more time, humans make newer, better technology and our lives improve. Except for when the opposite happens.

Google is a good example of this. I’ve been harping on the matter for a while now. Google mobile search, in case you haven’t used it lately, is bad. It often returns bloated garbage that looks like a cross between new Yahoo and original Bing.

Here’s how it butchered a search query for “Metallica” this morning: 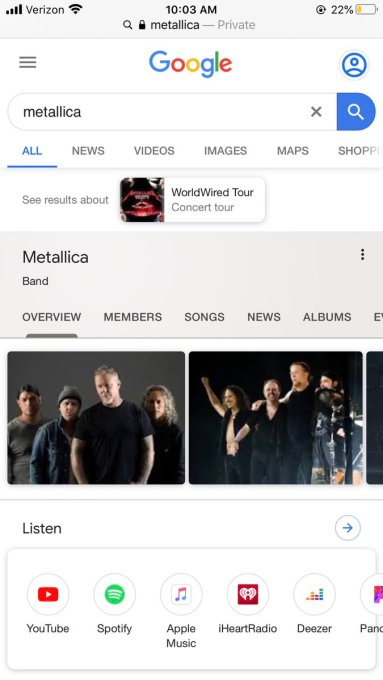 It’s not just Google’s mobile search interface that makes me want to claw my eyes out and learn how to talk to trees. Everyone now knows that Mountain View has effectively given up on trying to distinguish ads from organic results (Does the company view them as interchangeable? Probably?). TechCrunch’s Natasha Lomas covered the company’s recent search result design changes today, calling them “user-hostile,” going on to summarize the choices as its “latest dark pattern.”

Google, once fanatical about super-clean, fast results, is now trying to help you way too much on mobile and fool you on Chrome.

Chrome itself kinda sucks, and is getting worse. But we all know that. Of course, that all this is shaking out around the same time that the company’s founders left is, you know, not shocking.

I’d also throw TweetDeck into the mix. It’s garbage-slow and lags and sucks RAM. Twitter has effectively decided that its power users are idiots who don’t deserve good code. Oh, and Twitter is deprecating some cool analytics features it used to give out to users about their followers.

Chrome and TweetDeck are joined by apps like Slack that are also slowing down over time. It appears that as every developer writes code on a computer with 64,000 gigs of RAM, they presume that they can waste everyone else’s. God forbid if you have the piddling 16 gigs of RAM that my work machine has. Your computer is going to lag and often crash. Great work, everyone!

Also, fuck mobile apps. I have two phones now because that’s how 2020 works and I have more apps than I know what to do with, not to mention two different password managers, Okta and more. I’m so kitted out I can’t breathe. I have so many tools available to me I mostly just want to put them all down. Leave me alone! Or only show me the thing I need — not everything at once!

Anyhoo, video games are still pretty good as long as you avoid most Battle Royale titles, micropayments, and EA. Kinda.