Zendesk acquired Base CRM in 2018 to give customers a CRM component to go with its core customer service software. After purchasing the company, it changed the name to Sell, and today the company announced the launch of the new Sell Marketplace.

Officially called The Zendesk Marketplace for Sell, it’s a place where companies can share components that extend the capabilities of the core Sell product. Companies like MailChimp, HubSpot and QuickBooks are available at launch. 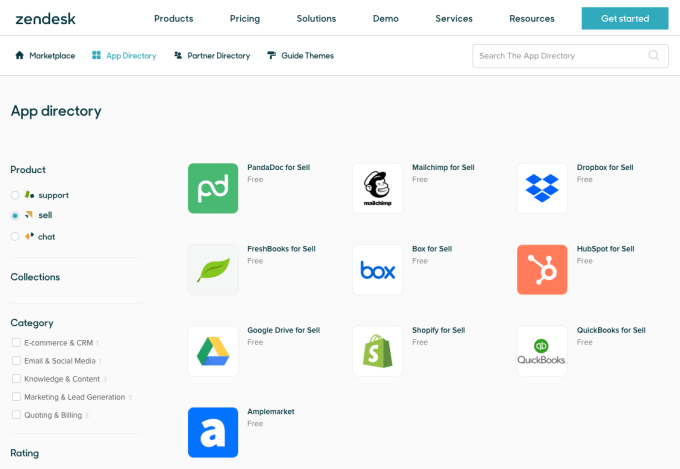 Matt Price, SVP and general manager at Zendesk, sees the marketplace as a way to extend Sell into a platform play, something he thinks could be a “game changer.” He likened it to the impact of app stores on mobile phones.

“It’s that platform that accelerated and really suddenly [transformed smart phones] from being just a product to [launching an] industry. And that’s what the marketplace is doing now, taking Sell from being a really great sales tool to being able to handle anything that you want to throw at it because it’s extensible through apps,” Price explained.

Price says that this ability to extend the product could manifest in several ways. For starters, customers can build private apps with a new application development framework. This enables them to customize Sell for their particular environment, such as connecting to an internal system or building functionality that’s unique to them.

In addition, ISVs can build custom apps, something Price points out they have been doing for some time on the Zendesk customer support side. “Interestingly Zendesk obviously has a very large community of independent developers, hundreds of them, who are [developing apps for] our support product, and now we have another product that they can support,” he said.

Finally, industry partners can add connections to their software. For instance, by installing Dropbox for Sell, it gives sales people a way to save documents to Dropbox and associate them with a deal in Sell.

Of course, what Zendesk is doing here with Sell Marketplace isn’t new. Salesforce introduced this kind of app store concept to the CRM world in 2006 when it launched AppExchange, but the Sell Marketplace still gives Sell users a way to extend the product to meet their unique needs, and that could prove to be a powerful addition.

Zendesk expands into CRM with Base acquisition