In an industry where unit economics are low, operators are seeking ways to improve margins while also maintaining fleet reliability and low prices for riders. Charging stations may be part of the solution. Already, there are a handful of companies, other than the operators themselves, looking to address this issue by deploying charging stations. The latest one that has come onto our radar is called Charge, which just launched charging hubs in Los Angeles for both bikes and scooters.

“Charge came from two investors of Lime who were noticing a trend in the several markets Lime was rolling out into,” Charge Global Head of Community Quemuel Arroyo told TechCrunch. “They saw the Achilles’ heel was the lack of charging infrastructure, and that infrastructure could allow scooters to be charged all day and would undo the litter and obstacles in the right of way that scooters have become in the world.”

Charge’s hubs, located on private properties, are designed to make it easier for gig workers to charge several scooters at once. Workers can reserve space at hubs for 24 hours at a time, with each secure bay supporting 18 scooters and each hub accommodating 72 scooters at a time. Once charged, workers can pick them up for redeployment.

“In addition to the solution of providing charge, we’re enhancing the experience for juicers,” Arroyo said.

Bird, Lime* and other micromobility operators rely heavily on independent contractors to collect their scooters, charge them overnight and then redeploy them in the morning. That means scooter companies don’t have to use their own gas, labor and electricity in order to recharge these vehicles.

For gig workers who rely on charging scooters as a source of income, having a place to go other than their homes to charge a bunch of scooters at once is a major benefit. The catch, however, is that Charge costs $30 to charge while Bird and Lime, for example, offer a base pay of $3 to $5 for every charged and released scooter, but pay more depending on how difficult it is to locate.

Let’s use Spin, which pays $5 per scooter charged, as an example. If someone collects 15 scooters and brings them to a Charge hub, that worker will receive $75 from Spin for charging and redeploying the scooters, but will have to pay Charge $30. That’s a net profit of just $45.

“It’s not cheaper for them, but juicers say that instead of being able to charge 12 a night, they can charge 24 or more scooters per night,” Arroyo said. “That’s where we see an incremental increase for revenue for juicers themselves.”

Trying the calculation again with 24 scooters, the worker would pay Charge $30 and get $120 from Spin for a net profit of $90. That doesn’t seem all that great, but it could be depending on someone’s situation. Maybe one person only has enough space to charge five scooters at a time, so they would only be able to make $25 per night charging Spin scooters. If that same person can then charge 24 scooters a night, they still end up making a bit more by utilizing Charge. On top of that, they don’t have to crowd their living spaces and put themselves at risk of fire hazards.

Even though micromobility is a relatively young industry, there are already a number of startups specifically focused on charging micromobility vehicles. Collectively, they have raised more than $19 million in funding.

In addition to the hubs Charge has launched in Los Angeles, the company is also in talks with the city of Paris to deploy smart charging stations on sidewalks, which can accommodate up to 12 scooters.

“We’ve gotten an exclusive contract with the city, where the mayor says her streets are compromised and they can’t continue to allow scooter takeover of pedestrian space,” Arroyo said.

In this type of model, riders would be able to rent and return vehicles using the docks. This model is more similar to that of Swiftmile, which is working with the city of Austin to deploy 10 public-use sidewalk stations. That comes out to 80 parking slips per station. The company hopes to do this by the end of the year. With this type of model, charging companies charge operators based on usage. 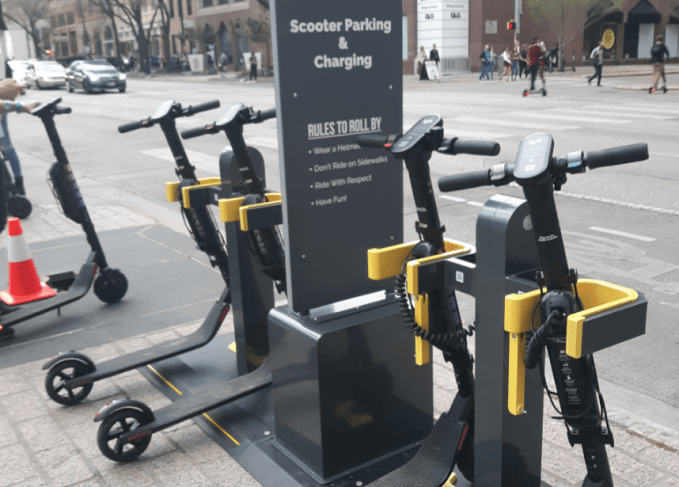 Swiftmile, for example, charges the operators by the minute, but not to exceed a certain amount, depending on the market. Initially, the docking system will be open to all operators in order to show them how it works and how beneficial it can be. After a certain period of time, Swiftmile will only charge its customers’ scooters. Swiftmile has also partnered with Spin to create branded charging hubs exclusively for Spin scooters.

Spin sees charging stations as a way for cities and other interested parties to better manage the scooter clutter problem, as well as help to better serve riders.

“Cities and local officials have expressed ample concern about scooter clutter, and Spin has led the way in solving that problem, with the goal of making micromobility a true and sustainable solution for people to get around,” Spin CEO and co-founder Derrick Ko told TechCrunch. “We’ve heavily invested in our charging and parking solution — Spin Hubs — and have expanded our offerings, such as incentivizing riders to park in designated drop zones or at a Hub.”

Perch Mobility is another competitor in this space, which says it’s “built by chargers for chargers.” Perch, which also operates in Los Angeles, offers three types of products: the pod, the tri-pod and the suite. All three offer unlimited charging for a fixed price, ranging from $25 per night for charging 14 scooters and $45 per night to charge 21 scooters at a time.

Using Spin again as an example, a worker paying $25 a night to charge 14 scooters would earn $70 from Spin, resulting in a net income of $45.

“We are focused on providing our users both sustainable incomes and community sustainability,” Perch Mobility CEO Tom Schreiber told TechCrunch. “We serve all parts of a community, including lower-income areas.”

Perch Mobility gets workers more money, but Charge says its systems are better for the environment, as they utilize lithium-ion green battery power.

If I were a charger, I’d surely continue to care about the environment, but I’d probably be more interested in making the most money.

*This story has been updated to clarify Charge’s pricing structure and note that Spin does not rely heavily on 1099 independent contractors for charging scooters. Instead, Spin employs more than 95% of its chargers as W-2 employees.