When Intuit acquired Mint more than a decade ago, mobile was in a different place — as were tech-enabled financial services. There hasn’t been much progress for the personal finance tracker app category in the meantime. Mint has stumbled along with integration issues and tiresome data misclassifications. For many, the best alternative has been firing up a spreadsheet.

Copilot is a new personal finance-tracking app from a former Googler that seems like it could garner a following based on its slick design and ease of use. The subscription iOS app lets you load your financial data, create custom categories for transactions and set budgets. It has been invitation-only for the past several months, but is launching publicly today.

Founder Andrés Ugarte told TechCrunch that he started the effort after eight years at Google — most recently inside its Area 120 experimental products division — because of slow progress in the personal finance space since Mint’s acquisition.

“I’ve been trying to use personal finance apps for the last eight years, and I eventually ended up giving up on them,” Ugarte says. “I was willing to make them work, and create my own categories and fix the data so that stuff was all categorized correctly. But I was always disappointed because the apps never felt smart because they would make the same mistakes again.” 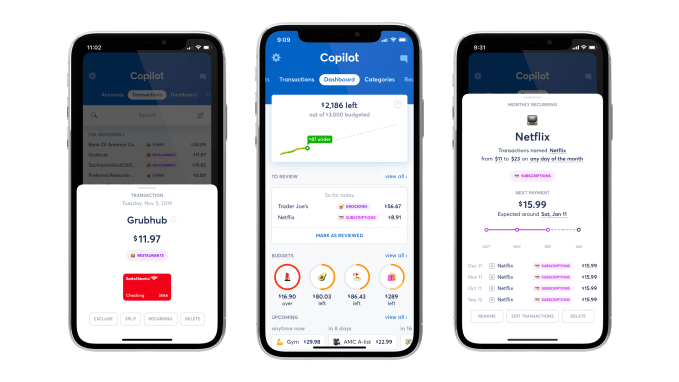 I spent a few hours poking around Copilot over the past couple of days and I like what I’ve seen. The design is friendlier than other options, but its major strengths are that you can easily re-categorize a transaction that didn’t automatically fall in the bucket that you wanted it to, mark internal transfers between accounts and exclude one-off purchases from your tracked budget. Other apps have also allowed these functionalities, but Copilot lets you denote whether you want every transaction with a particular vendor to route to a certain category or bypass your budget entirely, so it actually learns from your activity.

In some ways, the killer feature of Copilot is just how great Plaid is. The app relies heavily on the Visa-acquired financial services API startup, and I can see why the startup was so successful. The integration’s intuitiveness alongside Copilot’s already smooth on-boarding process gives users early indication for the app’s thoughtful design.

Copilot has its limitations, mainly in that the team is just two people right now, so those holding out for desktop or Android support might have to wait a bit. Some may be turned off by the app’s $2.99 monthly subscription price, though there are more than a few reasons to avoid free apps that have access to all of your financial info. Copilot maintains that users’ financial info will never be sold to or shared with third parties.

Ugarte has largely been self-funding the effort by selling off his Google shares, but the team just locked down a $250,000 angel round and is searching for more funding.