The new Pax Era Pro vaporizer packs a host of improvements and brings increased transparency to the user. Pop in a pod, and the smartphone companion app displays a wealth of information generally unavailable to the average user. The idea is to provide more peace of mind about what’s in each pod, and this system is launching at exactly the right time.

The Era Pro uses proprietary cartridges embedded with an NFC tag. Pax calls this affair PodID, and the tags are unique to each cartridge. Once the pod is inserted into the vape, using the Pax smartphone app, users can access detailed information, including oil content, strain information and potency, flavor profiles, producer information and state-regulated test results. 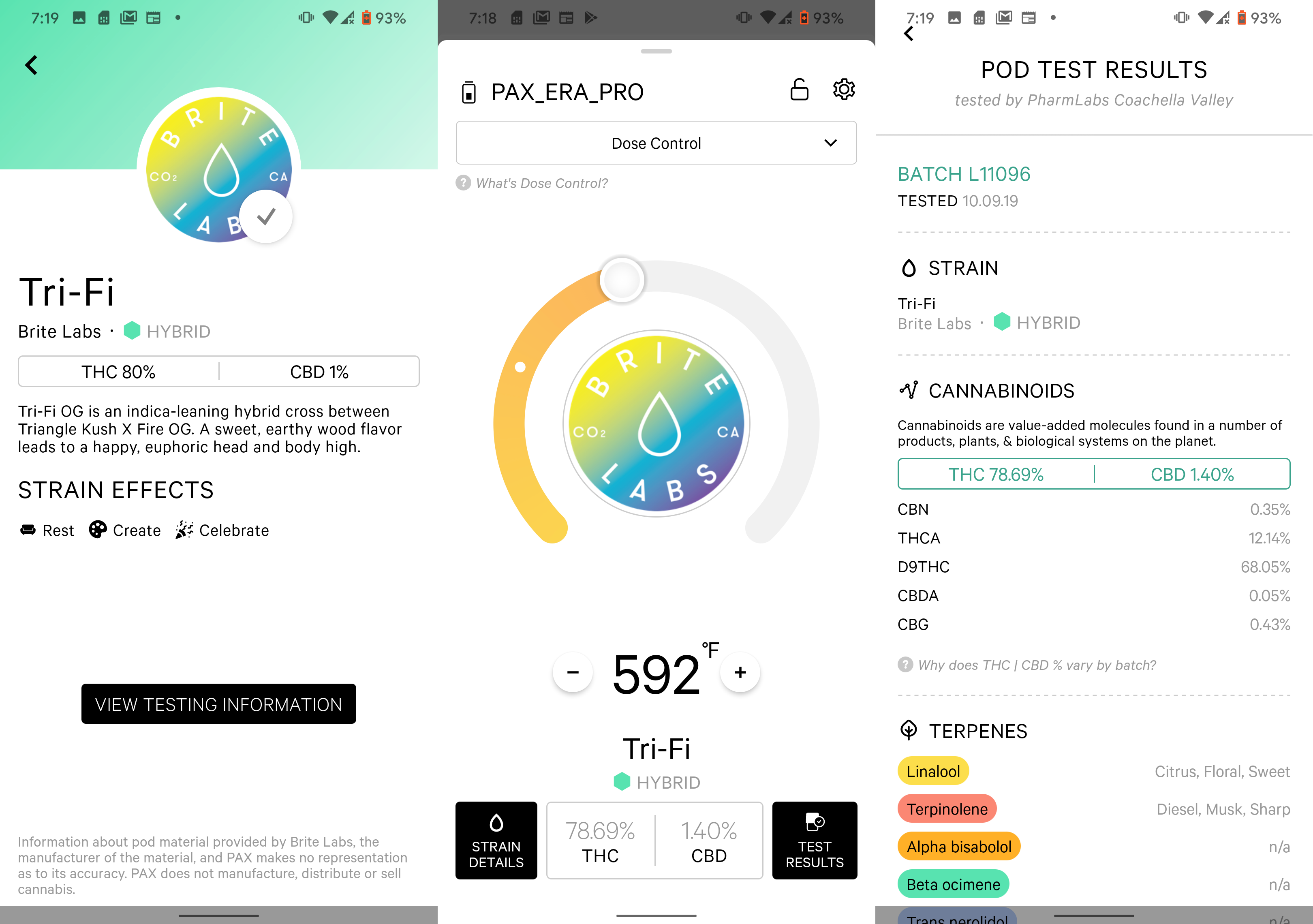 What’s more, because of the PodID, the brand partner who created the pod can set a recommended temperature setting, eliminating a lot of user guesswork. If a user overrides the setting, the new setting is saved to the pod.

Pax rolled out these pods a few months ago. Different packaging and a red ring around the cartridge lets users tell them apart from the original pods. Pax tells TechCrunch they have signed up 60 so-called brand partners — the companies that produce and fill the pods with the sticky goodness.

PodID is hitting the market at the ideal time, as regulators are seeking ways to increase consumer safety and clear, tangible data answers. I dug into the info on my test unit and it’s full of information presented in an easy to read, accessible format.

But there’s a catch. Apple instituted a blanket ban on vape apps in November. Right now, the information available through PodID is only accessible on Android phones. Pax tells me they’re working on a solution to bring the information to iPhones without the need for a dedicated app. This should be available in the coming weeks.

Pax unveiled the Era vape in 2016. It’s small and similar in design and function to a Juul vape. The Era Pro, launching today, brings improvements across the board.

The Era Pro features on-demand draw and closed-loop temperature control along with longer battery life and 50% better Bluetooth range than the original Era. The Era Pro recharges through USB-C and has a more pocketable design, with edges rounded off.

The new design looks more durable than the original. The chambered edges and plastic base give it a more rugged, modern feel. The pods snap in with a click. Draws are quicker (which is impressive, as the original was fast, too). To me, as someone who uses a Pax Era nearly daily, the Era Pro is a satisfying update and worth the upgrade.

PodID works as advertised, though I had to borrow an Android phone to test it. As an iPhone user, it’s disappointing that this feature is unavailable to me.

At $69, the Pax Era Pro is twice the price of the original Era. And that doesn’t include the pods, which I’ve found range from $40 to $65. It’s a big step up for what’s mostly a vape battery. Pax would likely say the transparency is worth the extra cash, and I agree. As a Pax user, I’m happy to pay extra for the added peace of mind gained from PodID. I wish it worked with my iPhone.