Japanese startup FPV Robotics is leveraging drone technology to address a growing global need: inspecting aging infrastructure in an effort to avoid major issues like unexpected bridge collapses. FPV Robotics CEO and founder Masaki Komagata showed me his company’s production Waver drone, which is debuting for the first time ever at CES 2020 in Las Vegas this week.

Waver is an amphibious drone, which can fly thanks to eight rotors, and also speed along the surface of bodies of water using its floats. This dual nature makes it particularly well-suited to solving a very specific task — a problem Komagata set out specifically to solve after observing that Japan Railways (JR) needed this addressed.

This specific problem was rail bridge collapse, including damaged and destroyed bridges along the Tadami River in 2011 due to floods in Niigata and Fukushima. Many of the spans that JR relies upon for its Shinkansen and other local trains in Japan are considerably old, and beginning to show their age. That wear can be further exasperated by environmental disasters — which are occurring with greater frequency as a result of climate change.

FPV Robotics can’t magically repair this aging infrastructure or prevent natural disasters, but it can deliver on-demand, flexible monitoring and inspection at a greatly reduced cost compared to current methods. Komagata partnered with JR and with sensor company OKI on development of the Waver to custom-design it specifically for this use, which is where it got its amphibious abilities and attached multibeam sensor array. 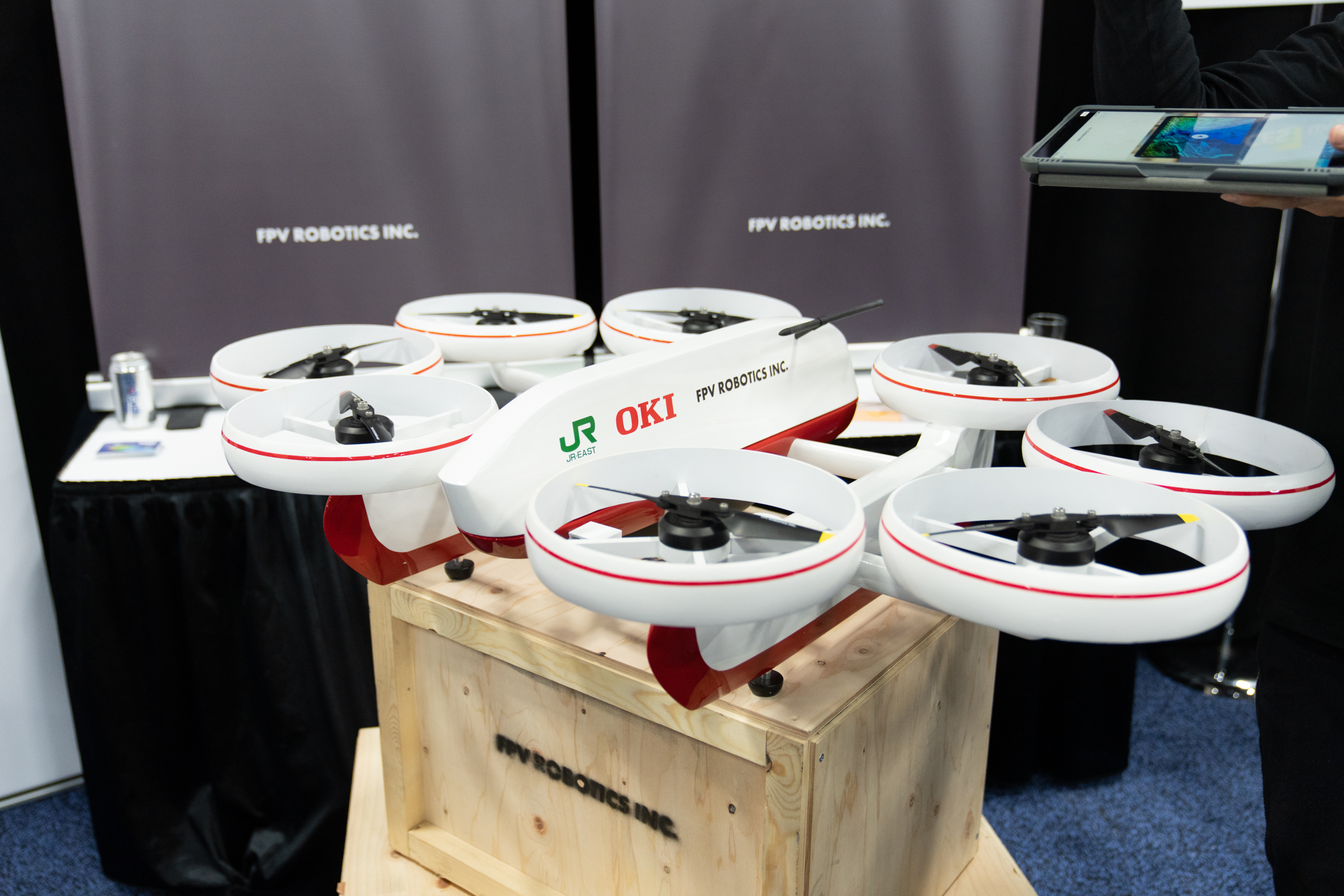 This multibeam technology, provided by OKI, is installed on the bottom of the Waver drone and provides sonar imaging capabilities that allow the drone to accurately map the bottom of a river or seabed from the water’s surface. This information, Komagata tells me, can be used to help predict when infrastructure, including bridges and roads, might need to be replaced or reinforced, prior to any actual collapse or damage.

Waver can autonomously map a predetermined section of riverbed, moving like a Roomba across the water in segment sweeps to build the full picture. It’s also equipped with eight rotors, more than your average VTOL drone, which Komagata tells me is for added redundancy so that it can continue to operate effectively even in the unlikely event that it loses power to multiple rotors at once.

In addition to the sea and river bed inspection, the Waver can do a visual inspection of the bridge itself from up close using a more traditional camera, as well as the supporting land from which it extends. Komagata points out that this kind of multi-part inspection can require specialized boats, many hours of trained personnel time, things like temporary scaffolding for a close-up eyes-on approach and a lot more. He estimates based on studies FPV has done that their drone could reduce inspection costs to as little as 1/20th the cost of existing methods. That means it would be possible to monitor much more frequently than can be done currently, and in circumstances where risk to human inspectors on the ground might be a necessary component of using more traditional means.

Waver estimates that just taking into account bridges alone, there’s a roughly $25 million per year total addressable market, and it’s aiming to acquire around 4% of that (roughly $1 million in revenue) in 2020, and then to grow that by about $2 million per year in the next two fiscal years. It’s currently mostly bootstrapped, with 90% of the startup’s existing ¥30,700,000 ($300,000) in seed funding coming from Komagata himself. With that capital, the company has already gone from working prototype (which you can see in the GIF above) to the much more polished production version debuted at CES.

Komagata, an engineer with a focus in drone development, envisions Waver being able to address challenges with aging infrastructure not just in Japan, but globally, though FPV’s initial focus is on the market opportunity at home. Ultimately, he hopes that Waver and other drone technology FPV Robotics brings to market helps to “make the world a better place,” and addressing challenges like infrastructure inspection is definitely a good place to start.